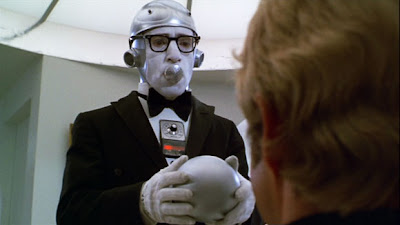 After the last couple of days, I needed a film that I knew I liked. Sleeper fills the bill for that. I like Woody Allen, as I’ve said before. My introduction to his film was, I think, this one. If not, it was another of his early films back when everything he did was straight comedy without much in the way of relationship issues or drama. I like these early films of his because they’re just meant to be funny, and they’re the sort of funny I like. It’s a mixture of highbrow and lowbrow, goofy and cerebral. Sleeper leans heavily toward the goofy, and I’m fine with that, too.

Miles Monroe (Allen) is a part time clarinet player and owner of the Happy Carrot health food store. Complications from minor surgery cause him to end up cryogenically frozen without his knowledge. He’s revived 200 years in the future in a dystopian society where the masses live under the rule of a dictatorship that stresses personal pleasure as a way to keep them in line. Miles is revived by a rebel faction that wants to use him as a way to infiltrate the hierarchy of the rulers.

In trying to evade the evil overlords, Miles spends some time in the guise of a robot butler in the employ of Luna Schlosser (Diane Keaton), a bad but acclaimed poet, who decides to have Miles’s head removed for something more aesthetically pleasing. This causes Miles to kidnap her in his search to find the rebels. Eventually, Luna does find the rebels, but Miles has his brain reprogrammed to accept the new world order, and is then kidnapped by the rebels again in the hopes of defeating something called “The Aries Project.” This leads to Miles and Luna infiltrating the rulers’ headquarters to discover that the leader has been killed in an assassination attempt and needs to be cloned from the only remaining part: his nose.

All of these plot elements are there simply for Allen to allow his freak flag to fly as high and as hard as it can. Sleeper is far less philosophical and relationship-based than his later, “greater” films (although he was only four years away from Annie Hall). No, as mentioned above, this film is purely about shoving as many laughs as possible into the script and throwing everything against the wall to see what sticks. Fortunately for us as the viewers, Woody Allen is a good enough writer and a smart enough comedian that a lot of it does, and even with the continually silly premises, most of it works pretty well.

And that’s really the joy of Sleeper as a film. It’s smart people (Allen, Keaton) being silly. There are dozens of sight gags here and slapstick humor that really works. None of this is meant to be taken seriously mostly because none of it can be. How seriously can you take it when the people of the distant future are taking drugs by holding a sphere and have sex in a machine called the Orgasmatron? These things are used strictly as comedic pieces—the orb is introduced when Miles is pretending to be a robot butler, which should be immune to its effects. Miles, of course, is not, and the results are tremendous.

It’s difficult to define or describe Allen’s comedy. There is a touch of the surreal in its rampant silliness. It also contains a great deal of his well-established self-deprecation. Allen’s humor works so well in Sleeper because a great deal of it is focused inward at himself, and no part of the character of Miles Monroe is off limits. One recurring joke is that everything Miles held to be true has been scientifically proven false: tobacco has massive health benefits as do deep fried foods and hot fudge. In one of the better scenes, Miles is shown a number of historical artifacts from the distant past and asked to explain them. Miles takes the opportunity to distort history as much as possible, claiming that Charles de Gaulle was a well-known chef and broadcasts of Howard Cosell were used as punishment for lawbreakers.

And the point of all this is? Entertainment, pure and simple. There’s not a great deal of meaning behind anything that happens in this film, but there’s not supposed to be. It’s all here strictly to be funny, and it succeeds in the main. Sleeper is silly stuff, but it’s really good silly stuff. I get how someone wouldn’t like Allen’s brand of humor, but it works for me.

It’s worth saying that I’d have been moderately happy with any of Allen’s early comedies. I think Sleeper is the best of them, but Take the Money and Run, Everything You Always Wanted to Know About Sex, Bananas, and Love and Death are all funny, too and all work on the same sort of level.

Why to watch Sleeper: Woody Allen in his early, all-funny days.
Why not to watch: If you don’t like Woody Allen’s comedy, you certainly won’t like this.