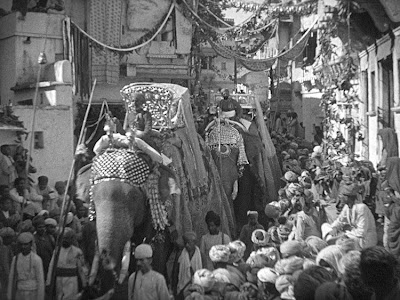 With the revamped version of The List, new films were inserted pretty much into every decade. I had been done with the silent films for some time, and with a viewing of Prapancha Pash (A Throw of Dice), I’m again done with silents, at least for a bit. While this is a film obviously made in India with Indian actors, but it’s really a German production. And “production” is the operative word here. In fact, that would be my guess as to why it’s shown up on The List now. This is a production that allegedly involved 10,000 extras and 1,000 horses plus elephants and tigers. This is opulence on the scale of De Mille or Erich von Stroheim.

The story relies in part on ancient film conventions that, while still used sometimes today, are the kind of thing routinely looked at as bad filmmaking. I’d argue that the particular twist that drives the middle of the film never works unless it’s better written than what we have to work with here.

Anyway, we are concerned initially with a pair of Indian kings. The first, who we will be following and taking as our hero, is Ranjit (Charu Roy). While an inveterate gambler, he at least is portrayed as a decent guy. The second is Sohat (Himansu Rai, who looks remarkably like an Indian John Lovitz), who is a complete bastard. The two kings are cousins and spend all of their time gambling with each other. We learn very quickly that Sohat has designs on Ranjit’s kingdom and plans to have him killed during a hunting expedition. Cue the hunting expedition, and Ranjit takes a non-fatal arrow.

His injury leads him to Kanwa (Sarada Gupta), a great healer, who is able to save Ranjit’s life. It also brings both Ranjit and Sohat into contact with Kanwa’s daughter, Sunita (Seeta Devi). Both men instantly fall in love with her, but since Ranjit is living in her house with her while he recuperates, she learns to love him as well. This annoys Sohat, who still wants Ranjit’s kingdom. To discredit his cousin, he has his minion Kirkbar (Modhu Bose) kill Kanwa. He does, and plants ridiculously obvious evidence framing Ranjit in the crime. And then he goes and tells Sunita what was found at the scene, and she believes him.

This is where the film doesn’t work for me. The planted evidence is Ranjit’s dagger and his amulet. Because when you kill someone, you should always make sure that you leave behind incredibly incriminating evidence. It would be like someone claiming you killed someone because you left a signed confession and your business card. It just seems so dumb. Ranjit would have to be the stupidest person alive to leave that sort of evidence behind, and Sunita would have to be equally stupid not to see through it.

Anyway, she eventually sees through it when Sohat has a cobra slipped into Kirkbar’s room and Kirkbar admits to the murder with his dying breath. Sunita rushes back to Ranjit and everything is instantly forgiven. Ah, but we’ve still got a good half hour left in the film, so there’s plenty of time for more treachery. Sohat arrives the day before the wedding of Ranjit and Sunita with a gift of very fancy golden dice, and he suggests a game before the wedding. They play all night, with Ranjit winning through the night. Of course, it’s a set up. In the last game, Sohat stakes his kingdom on the end of the game. Ranjit does the same, and of course loses. They play again, this time with Ranjit playing to win his kingdom back or become Sohat’s slave, and of course he loses again. The rest of the film is the resolution of this dastardly plot and the inevitable reconciliation between Ranjit and Sunita and the fall of Sohat.

Prapancha Pash like many a silent film, is melodrama of the highest order. There’s nothing good about Sohat. Ranjit’s only flaw is his penchant for constant gambling, and while this causes his downfall at the end of the second act, it’s never really viewed as an actual problem. After all, he doesn’t lose because he’s a chronic, addictive gambler, but because Sohat cheats.

Even more, the cheating, much like the blatantly obvious framing of Ranjit for Kanwa’s murder, is the sort of thing that everyone else in the film would need to be either blind or blindingly stupid to not see. The dice, which are not cubes but long rectangles, have buttons at the top that change the symbols. Is no one able to see this? It would be like someone replacing a die with one that only had fives and sixes on it in a game of Risk. It works only if everyone is a complete numbskull.

The only reason to watch Prapancha Pash is the one stated at the top: the opulence of the production. It is a grand spectacle.

But that’s all it is. There’s a shit-ton of extras and animals and giant crowds and some truly amazing sets to fit all of those extras. But really, if you’ve already seen Intolerance, you’ve seen some pretty opulent sets with massive amounts of extras. The benefit of Prapancha Pash over that bloated film is that there’s only one story and it’s a hell of a lot shorter. It’s not any better, though; it’s just shorter.

Why to watch Prapancha Pash: Some holy-shit big scenes with massive crowds.
Why not to watch: If it were any more melodramatic, Sohat would have a Snidely Whiplash mustache.