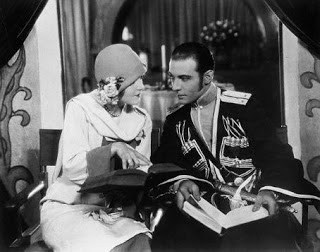 One of the biggest holes on The List in my opinion was the lack of anything featuring Rudolph Valentino, the greatest screen idol of the early years of cinema. Don’t get me wrong—there have always been plenty of holes on The List, but this was the first really noticeable one. Valentino may not have been a great actor, but it’s unquestionable that his presence on the screen was in no small part responsible for the popularity of early film. Given the choice, I’d have selected either The Sheik or The Four Horsemen of the Apocalypse as the best representations of his work. Instead, we get The Eagle, one of his last films.

Vladimir Dubrovsky (Valentino) is a lieutenant in the Russian army. Under review by the Czarina (Louise Dresser), Dubrovsky spies a runaway carriage and uses the Czarina’s horse to catch up to it and stop it. This introduces the lieutenant to Mascha Troekouroff (Vilma Banky), his immediate love interest. But it’s not going to be that easy; his daring rescue also inflames the desires of the Czarina who asks for a private audience. She offers him a generalship, but when it’s also apparent that she wants him for something else, Dubrovsky balks, and the Czarina puts a price on his head for the affront.

Just as this happens, Dubrovsky receives a letter from his father saying that a neighbor, along with some legal assistance, has essentially cleaned out the family. His father asks him to go to the Czarina for assistance, but of course that ship has sailed. Dubrovsky returns home just in time for the death of his dad and vows revenge. He does this in the most cinematic way possible: by donning a mask and becoming an outlaw, naming himself The Black Eagle. In short, this is a Robin Hood story with a lot less altruism and a lot more revenge. He even has a hideout in the middle of nowhere and a gang of thugs.

It’s worth stopping the summary for a moment to comment on the masks. These are the sort that cover only the eyes—essentially a bandana with eyeholes. I’ve never really understood why someone would think that that’s an adequate disguise. I think in general that I’d be able to identify most of the people I know if they were wearing a bandana across their eyes. Whatever.

Anyway, Dubrovsky, despite being a wanted criminal now lives pretty much openly. He discovers much to his chagrin that Mascha, the girl he saved way back at the start, is the daughter of the man who has ruined his father (James A. Marcus). Oh, what to do? Enacting his revenge would mean destroying the woman he loves. Loving the woman would leave his thirst for revenge unquenched. To start, he waylays a man sent to the girl’s house as a French tutor and takes the job himself.

Once he gets there, the rest of the film trades on this particular bit of tension. He is the Black Eagle, but finds himself unable to continue his attacks. She realizes that her French tutor is actually the Black Eagle himself, but can’t bring herself to turn him in. And what of the Czarina’s desire to see Dubrovsky dead for the affront to her? Yeah, that’s going to come up eventually, too.

The Eagle wants very much to be thought of in the same vein as something like The Thief of Bagdad or something similar. It has all the earmarks of wanting to be a film of high adventure and derring-do, but it simply isn’t. There’s not nearly enough action in it to warrant that sort of comparison, and most of the action we get is very unsatisfying. When Kyrilla, Mascha’s evil father decides that he doesn’t want her French tutor making flirty moves on his daughter, he tosses Dubrovsky into his wine cellar where he keeps a bear chained up. Eventually, Mascha goes to help him and the bear gets loose. Dubrovsky draws a weapon and shoots the bear. And that’s it. What could have been built up into a scene is over in a second with a single pistol shot.

There’s some truth to the idea that Valentino’s films were, in a way, the Twilight of their day. They didn’t have to be that good because Valentino had a built-in audience that would go and sigh over him no matter the quality of the film. And since it’s a film from the early days of the art, there’s not really much question about how it’s all going to end. All of this is evident with The Eagle. The film’s creators took everything they could think of, tossed it at a wall, and kept what stuck, which makes for a messy, silly film that has no idea what it wants to be.

In short, there are a lot of problems. Everyone at Kyrilla’s house gets worked up when the Black Eagle shows up, but we only got one minor robbery as establishment for the persona, so it’s impossible to understand why anyone really cares.

I’m happy to have Rudolph Valentino represented on The List finally, but this is not in any way the film I would have chosen to represent him.

Why to watch The Eagle: You should see at least one Valentino film.
Why not to watch: It’s not close to Valentino’s best.