What is Seen Cannot be Unseen 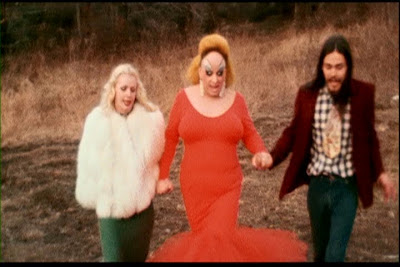 IMDB lists Pink Flamingos as a horror film, and I can’t really fault them for that designation. While it’s certainly in part a comedy, it’s also pretty horrific, and that’s intentional. There’s a line that doesn’t get crossed in art in general, and Pink Flamingos rockets past that line and shits on it in passing. This is another in the collection of films I’ve been holding off on watching. I didn’t realize it was at the top of my NetFlix queue, so when it showed up, I wasn’t sure how to react. Should I be happy I could finally cross it off or worried about the reality of actually watching it?

How to explain Pink Flamingos? There’s no way to do it but to do it. Drag queen Divine (Divine) has the current title as “Filthiest Person Alive.” However, because in the world of the film Divine is also a criminal, she is living in a trailer in Maryland under the pseudonym Babs Johnson. She lives in the trailer with her friend Cotton (Mary Vivian Pearce), her perverted delinquent son Crackers (Danny Mills), and her bloated mother Edie (Edith Massey), who is obsessed with eggs and lives in a play pen. Unbeknownst to Babs, she has competition in the “Filthiest Person” competition. These are Connie (Mink Stole) and Raymond Marble (David Lochary).

The Marbles live in the area and make their living by abducting young women, impregnating them via their gay butler Channing (Channing Wilroy), and selling the babies on the black market to lesbian couples. The money thus made is used to run a drug ring pushing heroin on grade school kids. Raymond Marble also adds to their income by flashing women in the park after tying a sausage around his penis, and then running off with any dropped purses.

Okay, so this sets us up for a pretty awful film, but it hardly scratches the surface of how really perverse it is. It doesn’t touch on Crackers having sex with the Marbles’ spy Cookie (Cookie Mueller) and including his chickens, nor the bloody remains of those chickens. It leaves out Cotton’s voyeurism, since the chicken scene happens specifically so she can watch. It leaves out Channing the gay butler masturbating and then impregnating another hitchhiker with a syringe. It doesn’t touch on Babs’s birthday party, complete with a man “lip”-synching “Surfin’ Bird” with his asshole, nor the murder and cannibalizing of the cops who try to break up the party (a scene that owes a lot to Night of the Living Dead). It ignores the most infamous scene in the film—Divine eating a freshly-laid dog turd.

This is where I might otherwise stand up and call Pink Flamingos an affront to human decency, and that’s exactly what it is. That’s also the entire point. The entire film is an extended middle finger to the idea of censorship and the prudish society that requires it. For that, Pink Flamingos is a product of inspired genius. It’s difficult to think of how it might be made more offensive. Even now, it’s still pretty damn shocking in places.

This doesn’t mean that it’s in any sense a good movie, though. It’s not. It’s a flat terrible movie with some of the worst acting I’ve ever seen. We’re talking Vinyl-level bad acting. People messing up lines in the middle and just going on, line readings with no sense of timing or cadence, completely amateur acting all the way around. Pretty much everyone is terrible and talks like they’re in a bad porn film (which, in a way, they are) or a grade school pageant. Of particular note is the bulbous Edith Massey, who looks like she memorized whole conversations and is playing them in her head. She spends her entire time on screen nodding her head to the beat of other people talking. She might be the most unnatural actor I’ve ever seen. If not, she’s top-5.

So, yeah, it’s pretty terrible. And that’s pretty much the point. The whole point of this is to gross out the audience as much as possible, and it succeeds. Because of this, it’s a difficult film to judge. Do I judge it on its terrible camera work, shoddy film stock, zero production value, and bargain basement acting? Or do I judge it on the intent that John Waters made it with? The reality is that Pink Flamingos is a truly terrible film, but it also contains within it something like genius. It’s awful and disgusting. It’s a filmed train wreck—horrifying and terrible, but something that you can’t tear your eyes away from it.

And it goes on and on and on. It feels like it’s never going to end despite having a running time of less than 100 minutes. Each minute of Pink Flamingos feels like three.

Did I like this? Hell, no. I can’t imagine wanting to see it again, either. But I do have a sort of grudging respect for what Waters wanted to accomplish with it. I just wish that if The List was going to include a Waters film, it had been Hairspray. I get why this film is on The List; I just wish it wasn’t.

Why to watch Pink Flamingos: The ultimate in raunch cinema.
Why not to watch: Did you miss the comment about raunch cinema?