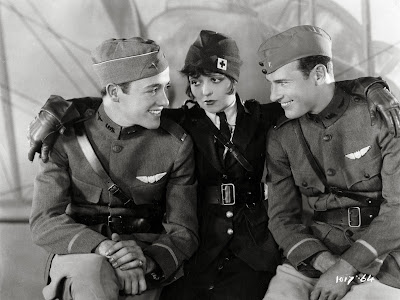 There was a time when you could barely have a movie at all if you didn’t shoehorn a love story into it. Such is the case with Wings, the first-ever winner of the Best Picture Oscar. Kind of. There were two different categories for the award that year. Sunrise won for Artistic Quality and Wings won for production. That said, most people count Wings as the official winner, although forgetting Sunrise just seems unfair.

This is a war film, and as the title suggests, it’s one in which air power will play a major role. Our two heroes of the air are Jack Powell (Charles Rogers) and David Armstrong (Richard Arlen). As the film begins, neither one is a part of the military. Instead, they are competing over the same girl, Sylvia Lewis (Jobyna Ralston, who made her name in Harold Lloyd comedies). Also in town and pining after Jack is Mary Preston (Clara Bow). In reality, Sylvia’s heart belongs to David, but she doesn’t have the courage to tell Jack that there’s nothing between them.

But war eventually comes to these United States and both men join up with the dream of flying above the battlefield. They endure their training and learn to become friends despite their rivalry for Sylvia’s attentions. They also learn of the inherent danger in their chosen military occupation when a fellow pilot (played by Gary Cooper) is killed in a training mission. Training completed, David and Jack head off to Europe for a taste of the shooting war. Meanwhile, Mary joins the women’s motor division and ends up driving an ambulance through war-torn Europe.

But really, Mary isn’t in this a ton. She shows up a few times to remind us that she’s still around and there’s an important sequence with Jack in Paris, but the film doesn’t spend a massive amount of time dealing with the love stories. This is very much a war film, and a great deal of the focus is on the shooting war. We see their skirmishes and victories, and while there’s still some sense of doing what they do because of the girls back home, the focus stays on the flying and on the ground immediately below.

That part of the films is the real selling point here. From the perspective of a modern viewer, the effects don’t hold up at all. But remember, this is a geriatric film, one that was pretty innovative in its use of camera and in filming dogfights and aerial maneuvering. There are places certainly, when the effects are not simply something to notice, but something that detracts in the moment. This was limited by the available technology, and Wellman does the best he possibly can. Many of these sequences are surprisingly effective, even today. There are a few shots that I’m not sure I know how Wellman pulled off.

In addition to the quality flying moments, Wings includes a surprising amount of the ground war. We don’t spend a lot of time actually in the trenches, but there are a good number of battle sequences with troops from the American side charging and invading enemy trenches with our men of the air flying overhead. The production values on this are surprisingly good for a film made in the mid-1920s. Again, I’m not entirely sure how Wellman managed all of this. The cost of the extras alone must have been staggering.

In the end, it’s often difficult for me to judge silent films from a modern perspective. This is particularly true of the sort of sweeping epic that Wings is. The plot is melodramatic almost by necessity, and the acting is naturally exaggerated because there is no spoken dialogue. I can try to put myself in the mindset of the time and appreciate it for what it is—really, that’s the best I can do. In that mindset, Wings is very much deserving of the acclaim it gets. I can imagine the awe and wonder with which it was viewed in 1927.

But this is not a perfect film. The long sequence where Mary finds Jack in Paris goes on far too long. Jack’s fascination with bubbles, and bubbles appearing everywhere is funny for about two minutes, but it goes on for what feels like 20. In fact, the whole subplot of Sylvia’s affections for David and pretending the same for Jack becomes of negligible importance after the first half hour or so, and ends up being not much of an important point at the end. This is true of Mary as well. Clara Bow’s role here is more or less ornamental.

For all that, Wings is worth seeing. Even if the ending dives deep into the melodrama pool, it’s worth watching for the production values alone. That, and it contains the first ever screen kiss between two men.

Why to watch Wings: First Best Picture ever.
Why not to watch: The melodrama hits hard at the end.