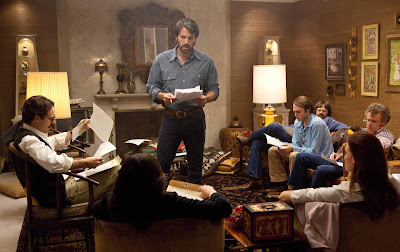 Honestly, this isn’t much of a prediction, or at least it’s a prediction without much in the way of risk. Every year since the incarnation of The List, the latest Best Picture winner from the Academy Awards has made it into that year’s edition. While there’s certainly the possibility of an exception, my guess is that Argo will grace one of the back pages in about a month.

Ben Affleck has gotten a lot of crap in his career. A lot of that (Daredevil, Gigli, Paycheck) has been deserved. So Argo is rather a redemptive moment for Mr. Affleck. It was, up to this point, pretty easy to push off all of Affleck’s acting roles as trying to capitalize on his charm and good looks. Despite his less-than-stellar movies in front of the camera, he has been slowly working out from under the baggage of his name as a producer and director. Argo put him in triple-threat territory: producer, director, and actor. And all of us can shut up about Ben Affleck now, because he nailed this one.

Argo is the virtually unknown story of the Iran hostage crisis that defined the second half of Carter’s term in the White House. I remember the hostage crisis and the daily updates of it. I don’t remember the small group of people who escaped from the embassy and hid in the home of the Canadian Ambassador. But that’s what the story is here. Argo is based on the actual story of the rescue of these six people. I don’t know how close it plays to reality. I imagine liberties were taken here to make it more exciting and to add that sort of edge to the film. I’m really okay with that, because the film is quite exciting.

It opens with the taking of the American embassy in Tehran and the escape of the six diplomats to the home of the Canadian Ambassador, Ken Taylor (Victor Garber). In the States, the immediate concern is getting the six hostages out as quickly as possible. It is determined that eventually the Iranians will realize that they do not have the full complement of Americans will start hunting for them, putting the Canadians at risk. A series of plans is created, none of them worth much. The best seems to be either disguising the diplomats as teachers or smuggling them bicycles and having them ride 300 miles to the Turkish border.

Enter Tony Mendez (Ben Affleck), operative and expert at extraction. Mendez develops a plan to extract the hidden diplomats by creating a very complicated and intricate plan, but one that is particularly ingenious because of what it takes to sell it. The plan is to pass off the diplomats as a film crew with the cover of scouting film locations in Iran. To help, Mendez enlists John Chambers (John Goodman), a Hollywood makeup artist who has worked with the CIA before.

And this is where things get interesting. Chambers suggests that the only way the cover is going to work is if they go about it like a real film. That means optioning a real script, hiring real actors, and getting a director with a name to stand behind it. With enough publicity behind it, the idea of the film production would take on a life of its own, allowing Mendez to get into Iran (posing as a Canadian citizen), quickly train up the diplomats, get them on a plane and get them home. They hire director Lester Siegel (Alan Arkin), buy the rights to a crappy sci-fi script called “Argo,” hire on actors, put ads out in Variety, and everything stats to gel.

There’s something very cool about this type of cover up and deep espionage deception. It’s not simply the spy angle, although that’s certainly part of it. It’s the whole layer ipon layer of make believe. There’s a meta quality anytime goes undercover in a film—the actor is playing a character who is playing another character, so that’s cool. Even without that, though, there’s the whole concept of “the big secret,” this thing that everyone knows about but that no one really knows about. It’s a natural tension builder, and when lives are on the line as they are here, the tension ramps up very quickly.

While Ben Affleck is serviceable in the role of Tony Mendez, it’s not a revelation in acting. He is far more noteworthy as a director, and I’m starting to think that maybe this is where he needs to start focusing his efforts. The man has some skill behind the camera. Argo is nicely paced, tense, and makes good sense of what couple be a terrifically complicated plot. In less sure hands, the story of Argo is a mess, but here, it’s never confusing once.

But is it a Best Picture? That I don’t know. There are still a lot of last year’s nominees I haven’t seen yet, so I don’t know if it was the best of the bunch. Affleck probably should’ve gotten a nom for Best Director; that does feel like a snub. But with 20/20 hindsight, Argo winning makes perfect sense. After all, it’s not that difficult to think that Hollywood players would reward a film that makes heroes out of the people who make films. Even fake films.

Why to watch Argo: It’s a slice of history many know about, but they don’t know this aspect of it.
Why not to watch: Is it really a surprise that Hollywood would give awards to a film that makes Hollywood out as the heroes?