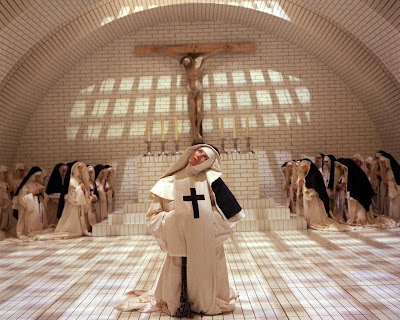 After yesterday’s film, it makes a kind of sense to watch a film that is very much in the same sort of vein but with far more artistic credibility. Of course, I didn’t have anything left on The List that really fit the bill…until the news that the new edition had been released. One of those new films is The Devils, the often-banned, X-rated psychodrama by auteur filmmaker Ken Russell. Once I saw that had made it, I knew that was the film for today. You never know what you’ll get with a Ken Russell film, but there are a few things you can guess pretty accurately. Any Ken Russell film will be wildly inappropriate, flamboyant beyond all measure, disturbing, irreverent, and overtly sexual. The Devils is not only all of that, but far more extreme than any of the other Russell film I’ve seen to this point.

The prime mover of the plot is the battle between the Protestants and Catholics in France under the rule of Louis XIII. As the film starts, we see Louis himself (Graham Armitage) involved in a sort of flamboyant gay pageant on the birth of Venus, with the king as Venus. What follows is something like a power play by Cardinal Richelieu (Christopher Logue). Richelieu wishes for increased power by destroying the walls of many of the towns under the pretense of wanting to prevent a Huguenot uprising from gathering in the towns . Louis agrees, but leaves out the city of Loudun, since he had promised to leave those walls intact.

Loudun itself is a town with a series of problems only Ken Russell could dream up. The previous protector of the town has died of the plague. The moving power in Loudun now is Urbain Grandier (Oliver Reed), a priest, but one with fleshy desires, including the impregnating in one of his students. Grandier is the object of desire of many of the women of Loudun. In particular he has caught the attention of Sister Jeanne (Vanessa Redgrave), the physically twisted and sexually repressed Mother Superior of the local convent.

So we’re set up for something that can go in some pretty strange directions, but Russell takes the story to places no one was prepared for. Jeanne suffers fits of religious and sexual ecstasy that increasingly feature Grandier in the guise of Christ. She completely loses all semblance of sanity when she learns that Grandier has secretly married Madeleine (Gemma Jones). In a sort of twisted revenge, she claims that she is being attacked by an incubus that comes in the guise of Grandier himself. This brings in the presence of Father Barre (Michael Gothard), a twisted and insane inquisitor who performs horrible and painful tortures in the guise of exorcism, all to the extreme displeasure of Richelieu’s agent, Baron De Laubardemont (Dudley Sutton), although he’s happy to capitalize on her accusation of Grandier.

The irony, of course, is that Grandier is perhaps the only decent person in the entire film. While certainly fleshy in the sense of being far worldlier than a priest probably should be, he is still in many ways a man of the cloth. Everyone else is completely insane or power mad.

There is no doubt as to the reason this film was banned repeatedly and given an X rating. It honestly can’t be described, but only experienced. And in one of the most surprising things to me, the ending is almost a dress rehearsal for the 1973 The Wicker Man and Braveheart.

The Devils is a singular vision. Despite the time period of the film, Russell decided to depict a great deal of it as a sort of futuristic vision. In a sense, it takes place in no time and in no place. It is a portrait of miserable insanity and is also both an indictment of and an acquittal of religion. Virtually no religious sacrilege is left untouched, with only the character of Grandier left to speak for it.

This is a difficult film to recommend, and also an impossible film to forget.

Why to watch The Devils: Holy shit weird and extravagant in a way only Ken Russell could be.
Why not to watch: If you are at all religious, it will offend you terribly.