Film: The Towering Inferno
Format: DVD from NetFlix on laptop. 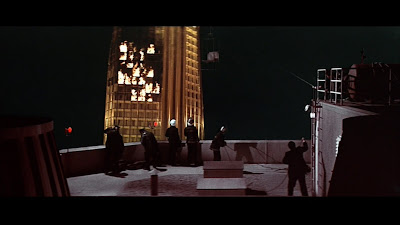 Before there was Michael Bay, there was Irwin Allen. While Allen directed a good number of films and won an Oscar for a documentary, in the 1970s, the name Irwin Allen meant one thing and one thing only: disaster movie. By this I don’t mean films that were terrible (although some no doubt were), but films about disasters. Every year or so, a film would appear about a group of diverse people trapped in an X or attacked by Y or surviving natural disaster Z. Not all of these were produced by Irwin Allen, but it sure seemed like it. Of these, The Poseidon Adventure and The Towering Inferno were the leading examples. The Towering Inferno got more street cred by being nominated for eight Oscars (including one for Fred Astaire as a Supporting Actor and for Best Picture) and by winning three: cinematography, editing, and (brace yourself) best song.

A film like The Towering Inferno is a masterpiece of high concept. “What if a fire broke out in the tallest building in the world?” Toss in a collection of A-list actors and you have quite the film. As it happens, it was released in a year when the actual Best Picture race wasn’t much in question; nominating this was pretty harmless since it didn’t have a hope of winning over The Godfather Part II.

So what can you expect? Well, you should expect a really big fire. Beyond that, what you should expect is exactly what you’ve seen in any other disaster picture. There will be good guys and bad guys. Most of the bad guys will have bad things happen to them and will not survive to the end of the film. There will be plenty of heroic characters who will either make it to the end or will die heroically. The other people, the innocents, will either die tragically or will survive, and almost certainly a couple of people will survive despite horrific odds. That’s the way these films work, and that’s what’s going to happen for nearly three hours.

Anyway, the world’s tallest building is The Glass Tower in San Francisco, nearly completed and opening itself to the public as the film starts. We’re introduced to the building’s architect Doug Roberts (Paul Newman), just preparing himself to retire from the business and move to the country. He spends a little quality time with his girlfriend Susan Franklin (Faye Dunaway) who is having her own minor quandary—she’s been offered a new position, but this would mean not heading with Doug to the country. We also meet the builder, Jim Duncan (William Holden).

Trouble starts right away when it becomes evident that substandard wiring was used in the construction of the tower. We see evidence of this electrical problem when one of the fuse boxes shorts out. Unbeknownst to anyone, another fuse shorts and sparks directly onto a direct-from-the-stockroom pile of oily rags.

This cast of characters isn’t enough, though. We get a deaf woman with two kids (one of them played by Mike Lookinland, immediately identifiable as Bobby Brady) who lives high up in the building. Her assistant Lisolette (Jennifer Jones) is being romanced by conman Harlee Claiborne (Fred Astaire). The opening ceremonies include Senator Parker (Robert Vaughn) and San Francisco mayor Ramsey (Jack Collins). The man responsible for the suspect wiring is Roger Simmons (Richard Chamberlain), who happens to be married to the builder’s daughter. And of course we can’t leave out security chief Jernigan (O.J. Simpson) and the man of the hour, Fire Chief Mike O’Hallorhan (Steve McQueen). Rounding out the cast is a man connected with the building named Bigelow (Robert Wagner), who makes the fatal mistake of some alone time with his assistant, leaving the pair of them trapped when the fire breaks out.

That’s the whole movie. Fire breaks out and grows without being noticed because of security and safety measures that haven’t been put in place yet and sub-standard wiring put in to cut costs for a building that overran its budget. While we spend a great deal of time worrying about the fancy guests hobnobbing and then trapped on the 135th floor of the building. Much of our compassion is reserved for the people who seem the most innocent as well as those actually trapped in the blaze.

There isn’t a great deal of characterization here—all of the characters are two-dimensional, but that’s to be expected. This isn’t the sort of spectacle where we need or even want to learn much about the people beyond the basics. No, the whole point of a film like The Towering Inferno is to see the disaster, see the lengths to which people will go to survive. In this case, we also want to see people on fire jumping out of 80-story windows.

That’s really the reason a film like this exists at all. We want to see just how bad the disaster will get. We want to see people in terrible danger. We want the people we like to survive, and most of them do. We want the people who deserve to die based on their quick characterization to die, and most of them do, too. Everyone is conveniently arranged in neat categories or as a one-sentence blurb. Chief O’Hallorhan is a perfect Steve McQueen character; he’s tough, resourceful, smart, and brave. Doug Roberts is the Paul Newman we expect. Knowing his career is probably over, he spends the film doing what he can to save everyone he can and acting with nobility.

It’s over-long. The problems get worse and worse and survival gets sketchier and sketchier, and rescue efforts get more and more extreme. It was never going to be a short film, but 165 minutes is probably half an hour more than necessary.

It’s interesting how relevant this film is post-9/11. Is it worth seeing? Sure, but take it with a grain of salt. It’s big and blustery for a reason.

Why to watch The Towering Inferno: Everyone should see at least one 1970s big-budget disaster movie, and as those go, this one is pretty good.
Why not to watch: It’s too long and too predictable.