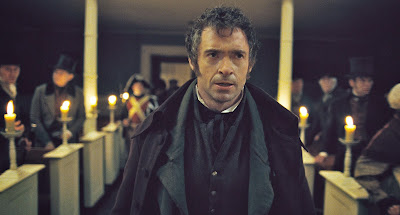 I wasn’t sure about the fate of Les Miserables when contemplating the new additions for the latest version of The List. I figured it had a middling chance. On the one hand, it’s a modern musical, and The List loves modern musicals. On the other hand, despite its Best Picture nomination and the win for Anne Hathaway, everything I heard about it was pretty mixed. Some people loved it and others found it ridiculous, except for some performances. I suppose it got points for having the actors actually singing their parts live. Anyway, here it is, and as the longest film remaining, it’s time to put it behind me.

It’s worth noting that I’ve seen Les Miserables live on stage in Chicago. I say that to to stress that the version I saw live wasn’t like a high school production or amateur theater. It was good, I suppose, but musical theater genuinely doesn’t move me too much. It would be too much to say I hate it, but I’m not a huge fan. In truth, I’m not much of a fan of live theater in general. It just doesn’t do a lot for me. I’ve tried enough times to realize that it generally moves over me and leaves me unmoved.

And that makes this one difficult, because this is not merely a musical film, but something akin to opera. So no talking, just singing. For the most part, the casting was smart enough to get people who can actually hold a tune, and this is extremely helpful. There are a few exceptions, although I evidently disagree with some people on this. We’ll get to that later.

One thing that Les Miserables has going for it is that it is incredibly plot-dense. There’s not a lot of fat to trim here, and virtually everything is central to the plot. That said, the plot is also fairly meandering at times. I’ll do my best to keep this brief, because if I tried to get to every in and out of the story, we’d be here all day. So, at the beginning, Jean Valjean (Hugh Jackman) is released after 19 years in prison. His crime was stealing a loaf of bread, but his time was virtually quadrupled for repeated escape attempts. His tormentor is Inspector Javert (Russell Crowe). Given a new lease on life by priest, Valjean disobeys his parole and goes off to make a success of himself. A bad decision on his part leads to the torment of a young girl named Fantine (Anne Hathaway), who eventually becomes a prostitute as a way to support her illegitimate daughter.

Eventually, Valjean discovers what he has done to Fantine and determines to take care of her daughter Cosette (Isabelle Allen, who grows up to be Amanda Seyfried). Javert discovers who he is, and in Javert’s world, once a criminal, always a criminal. Cosette and Valjean run again, this time to Paris. Javert always pursues, forcing them to live in secret. Meanwhile, the greedy and evil innkeepers (Sacha Baron Cohen and Helena Bonham Carter) who once took care of Cosette follow along, hoping to wring more money out of Valjean. Their daughter Eponine (Samantha Barks) is in love with a young radical student named Marius (Eddie Redmayne). A chance meeting causes Cosette and Marius to fall in love at first sight. This happens just as the students plan a massive revolution. There’s more of course, but this will do.

So let’s talk about some of the high points here, and there are plenty of high points. As mentioned earlier, the bulk of the cast can more than carry a tune. Hugh Jackman puts in one of the great performances of his career here, and he is far more effective than I would have predicted. The same is true for Anne Hathaway. Fantine doesn’t survive the first hour of the film, but she is unquestionably one of its most memorable parts. Because of the constant singing, it’s difficult to tell one song from another, but her version of “I Dreamed a Dream” is absolutely soul crushing. If I had to pick the best part of the film, it’s her without question. Samantha Barks is equally memorable.

I’m also impressed by the scale of the production. It’s grand, to say the least. Additionally, the decision to have all of the actors sing the parts live is genius. It adds a visceral nature to the proceedings. It would not have the same immediacy if the actors had been lip-synching instead of actually singing their parts while acting.

Now the problems, some of which are a part of this particular production and some which are a part of the source material. I may be in the minority on this one, but I’m not a fan of Russell Crowe as a singer. He can carry a tune well enough, I suppose, but I genuinely don’t like his voice as a singer. Amanda Seyfried is a different problem; she warbles. She was genuinely difficult for me to listen to simply because she can’t keep on a note for longer than a quarter of a count.

A bigger problem is the odd decision that virtually everyone in the film speaks with a British accent. Okay, I understand that plenty of the actors are British, but it still seems like an odd decision for a film that takes place over a number of years in France. Perhaps I’m the only one bothered by this, but I was bothered by it.

But these are things I can live with. As I say, Russell Crowe can sing, but I dislike his voice, and Amanda Seyfried’s solo work doesn’t happen that often. The bigger issues I have are with the story itself. It’s too sweeping, too broad to really work well. At the core of the story, it’s about the battle between Jean Valjean and Javert. More specifically, it’s about the life of Valjean unjustly pursued for a crime of necessity and Javert’s realization that morality is far more complicated than the black-and-white world in which he lives. Honestly, the romance between Cosette and Marius seems the sort of thing tacked into the story as a required romantic element. In fact, this is true of the entire student revolution, which has little place other than a way to get Cosette and Marius together in the first place.

Ultimately, my opinion on Les Miserables is a difficult one. It’s a very impressive and noteworthy production of a story that I don’t like very much. And that’s as good as I can offer.

Why to watch Les Miserables: Be awed by the staging.
Why not to watch: Amanda Seyfried sings like a cartoon character.

Posted by SJHoneywell at 6:09 PM