Film: Wake in Fright
Format: DVD from NetFlix on laptop. 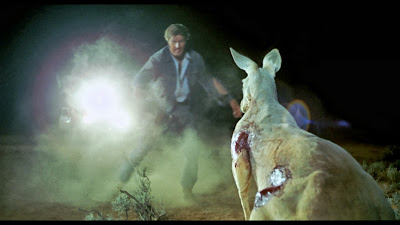 As someone who enjoys a good horror movie, I have to admit that I was intrigued by the name of the film Wake in Fright. Seriously, it sounds lurid just from the title, doesn’t it? Like it’s going to be filled with all of the monsters one might think of. Sadly, that’s not the case. Fortunately, there’s still a lot to be frightful of here. Wake in Fright is a crazy head trip that goes to some very ugly places. I mean that only as a positive thing.

John Grant (Gary Bond) is a bonded teacher at a little Outback town called Tiboonda. What this means is that he is not allowed to leave Tiboonda until he works off the $1,000 bond he owes the government for paying for his schooling. To Grant, this feels like a form of slavery, and he chafes at teaching a bunch of disinterested kids in the almost literal middle of nowhere. As the Christmas holiday starts, He leaves Tiboonda, hoping to catch a flight to Sydney to spend time with his girlfriend.

To get to Sydney, though, he first has to spend a night in Bondanyabba, called “The Yabba” by the residents. The Yabba is a hard-drinking mining town as Grant discovers when he meets the local police officer, Jock Crawford (Chips Rafferty). Jock shows him around town, which means he takes him to a couple of bars and a cheap dive restaurant. At the restaurant, Grant discovers the popular gambling game of two-up. This is a coin flipping game played with two coins, with the person flipping the coins betting on it coming up two heads. After a short winning streak, Grant bets all his money on a final flip, because a winning toss will allow him to completely pay off his bond and thus escape teaching for good. He loses, naturally, leaving him completely broke in a strange town and suddenly dependent on the rough kindness of The Yabba’s cruel and crude denizens.

What follows is a surreal and terrible hell, and that’s very much the point of Wake in Fright. John Grant’s world becomes something from which he cannot escape, just as he cannot escape from The Yabba. His world becomes a booze-soaked nightmare of events he can remember only in horrible fragments and flashes of painful hangover memories. He is taken in by a man named Tim Hynes (Al Thomas). The two spend the day drinking and eventually end up at Tim’s house where Grant encounters Janette (Sylvia Kay, Tim’s daughter, who is little more than a willing sex toy for many of the men of the area. He also reconnects with Dr. Tydon (Donald Pleasence), a man he met the night before.

Things devolve into a drunken nighttime kangaroo hunt followed by the destruction of a wasteland bar. Eventually, the descent into madness becomes too much for Grant to handle. He initially thinks about killing Tydon, who evidently forced sex on him during a drunken escapade, but eventually decides that the only way out of The Yabba is suicide.

It’s not overtly obvious what makes Wake in Fright as scary as it is, but there is unquestionably a level of horror to this film. John Grant’s world of The Yabba becomes a hell of perverted masculinity. No one likes to drink in The Yabba, but everyone does and does constantly. Drinking becomes fuel for the nightmare as well as proof of manhood. At one point, while John is dallying with Janette, one of Tim Hynes’s friends comments that there must be something wrong with him, since he’d rather spend time with a woman than drink beer.

What makes this particular hell remarkable is that only certain people can see it. For most of the men we encounter in The Yabba, there is nothing consciously wrong with the place. People are noticeably surprised when John says that he doesn’t like the city. But there are those who recognize it for what it is—a sort of end of the world in one sense, where there is nothing but alcohol and violence and dust. Janette sees this and reacts to it by craving sex with anything, despite evidence that she probably doesn’t enjoy it much, given the caliber of men she has to choose from. Tydon recognizes it, too, and survives by blinding himself with beer.

For John Grant, the hell of The Yabba is his inability to leave it. Try as he might, he cannot get away. Being completely broke is a part of this. Even when he does get away, he winds up back in the same place he started. His inability to leave this Outback hell is like his servitude to the service of the state as a teacher, in a way. Everything he tries to do to get away, no matter how foolhardy, ends up leaving him tighter in the noose.

So there is a horror here, but it’s an existential one rather than a horror that is fueled by terrible creatures of the dark. No, everything terrible here comes from other people and their own spiral of self-destruction. That’s entirely the point.

Wake in Fright isn’t a film that anyone is going to say is “scary” in the traditional sense, because it really isn’t. What it is is upsetting and unpleasant and frustrating. I mean this only positively. This is a surprisingly dark film for one that is so frequently taking place in bright, harsh sunlight. I can’t say it’s a film I liked, but it is one worth seeing.

(Note: I apologize for the delay between posting the first and second parts of this review. I finished writing this up last night, and our wi-fi had dropped.)

Why to watch Wake in Fright: Outback films are always cool.
Why not to watch: It's upsetting in a hard-to-understand way.