Film: Zerkalo (The Mirror)
Format: DVD from NetFlix on laptop. 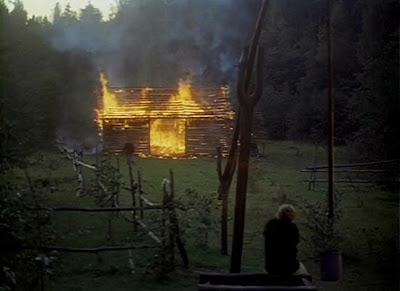 This is going to be a rough one. I don’t wish to imply that I didn’t find some value in Zerkalo (The Mirror) because I did, but I’m not sure how much I got out of it. This is a film that I’m pretty sure is packed with all sorts of meaning but that it can’t be unpacked on a single viewing. I admit I was tempted to watch it again immediately, but I’m not sure I’d have legitimately been able to watch it a second time right away. Even if it’s not packed with meaning, it’s dense with imagery.

Zerkalo’s difficulty exists because it is completely non-linear, and a substantial part of the film is either a dream or something like a hallucination. To borrow a line from Kurt Vonnegut, Zerkalo is unstuck in time. It’s also unstuck in reality. Furthermore, several characters are played by the same actor. The narrator’s mother from his memories is also his wife in the sections that are more present-day. It doesn’t fill me with any sort of pride to say that eventually I simply gave up trying to make sense of anything. It was far too willing to play hob with the narrative—what little narrative there was.

As near as I can gather, a man named Alexei (Filipp Yankovsky as a young child, Ignat Daniltsev as an adolescent and voiced by Innokentiy Smoktunovskiy as the narrator) is dying. What we are seeing is more or less his dream reverie as he nears death. It’s not clear how much of this reverie is real and how much is both a mash-up of memories colliding and how much is pure fantasy. Are his memories of his wife (Margarita Terekhova) and mother (same actor) conflated? The question is particularly pertinent because the mother is played by Larisa Tarkovskaya for the adolescent version, and she evidently has a different name.

Like I said, I gave up. It stopped being something I could make sense of or could even try to make sense of and instead became a series of images. Some were striking, like the burning barn or the mother levitating over a bed. Others were strange, like the young freckle-faced boy enduring military training with bad graces.

I remain convinced that there is something here buried under the layers of convolution and deliberate misdirected fiction. There must be, mustn’t there? I’ve no idea of Tarkovsky’s sense of humor, but I find it difficult to believe that he planned something as image-dense as Zerkalo as a goof on the rest of the world. In fact, I’m pretty sure that because there is so much potential here that there’s too much to see on a first viewing. I came to believe part-way in that this is a fim that must be slowly digested and must be viewed at least twice to have a hope of getting it. Having watched it once, I don’t think I’m any closer to its real meaning or impact than I was before I watched it.

And this brings up an important question. If a film is so opaque that it requires a minimum of two viewings, does it still have the possibility of being a successful film? I’m not sure. Zerkalo is a film I want to watch again if only to see if I can glean something from its intense obscurity, but I would be lying if I said it’s a film I’m looking forward to watching again. It’s far too difficult to follow, to vague, for me to have any real desire to watch it a second time—that is, except for the striking images.

My last refuge in a situation like this—a film that has completely stumped me—is The Book itself. In desperation, I looked over the write up of Zerkalo and discovered that I’m not the only one left holding the bag. There’s a reason the official comment on this film is largely about Tarkovsky himself rather than his film.

I will watch it again one day, and maybe then I’ll have a better handle on exactly what it’s trying to do. Until then, it’s a pretty experiment that left me miles behind it right away.

Why to watch Zerkalo: A very dream-like Tarkovsky.
Why not to watch: It’s a two-watch minimum.