Film: Splendor in the Grass
Format: DVD from NetFlix on laptop. 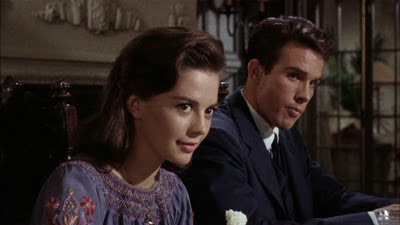 I’m not precisely sure why I waited as long as I have to watch Splendor in the Grass. There was a part of me that thought this was going to be some sort of goofy teen romance film, I guess. It really, really isn’t. For a film that takes place in 1928/29 and was made in the very early 1960s, Splendor in the Grass is sex, anger, madness, rape, and a whole bunch of stuff that I was not expecting. Seriously, I wasn’t braced for this one. It goes places I didn’t expect it to go. I almost wish I’d seen it sooner, but that would’ve prevented me from savoring it now.

In 1928 Kansas, Wilma Dean “Deanie” Loomis (Natalie Wood) and Bud Stamper (Warren Beatty) are as much an item as any two kids from high school can be. Bud is starting to discover that he has some natural urges that he’s having difficulty controlling around Deanie, but Deanie has always paid attention to her folks, who have told her to keep herself chaste. After all, that’s what good girls do. The best example in town of a bad girl is Bud’s sister Ginny (Barbara Loden). Ginny, despite coming from one of the wealthiest families in town, has become a party girl, a flapper, and a woman obsessed with smoking, drinking, and sex. She’s got an annulled marriage under her belt as well as an abortion to help put the annulment through.

And herein lies the problem for everyone. Deanie’s mother (Audrey Christie) continually stresses that men don’t want one of “those” girls to marry, which keeps Deanie away from Bud’s pants. For his part, Bud unfortunately listens to his blowhard father (a surprisingly young Pat Hingle) who tells him to stay away from Deanie’s virginal bits and to satisfy any urges he has with a woman who is more willing and able to satisfy those animal desires.

To combat his lust, Bud takes to completely ignoring Deanie, which has massiv repercussions for Deanie’s mental stability. She starts to lose herself out of fear of losing Bud to someone else. On the night of the high school dance, Deanie goes with Alan “Toots” Tuttle (Gary Lockwood) and dresses in the most scandalous clothing of the day. Knowing what Bud wants, she makes a play for him, but Bud, thinking he knows what Deanie really wants (and remembering what his father said), pushes her away. She winds up in Toots’s car almost on the business end of a rape, and this breaks her completely. Her parents are forced to sell off their stock to have her institutionalized in Wichita. As for Bud, he wanders off to Yale at the insistence of his father. For what it’s worth, all Bud wants is to marry Deanie, but neither his parents nor Deanie’s parents will allow this to happen.

This is a lot harsher than I expected this film to be. Like I said, I was expecting some sort of teen romance, and I got that, but I also got a great deal of darkness. What we don’t know about Deanie in the first 45 minutes or so of the film is that she is brittle emotionally and perhaps mentally, since just Bud ignoring her is enough to start her teetering on the edge. When she finally does break, she breaks hard and becomes virtually catatonic. Pretty harsh stuff for 1961.

I do kind of wonder what the target audience for this film was. Part of it seems to be going after the same sort of audience that would have been completely into a film like Rebel Without a Cause, and I think that’s pretty much where it’s headed. After all, the main parents (Bud’s dad and Deanie’s mom) are completely unsympathetic and kind of awful. On the other hand I, could see this as sort of a “warning” film to parents about the possible results of teenage hormones and passion. My guess is that it’s more the former than the latter. Teens of the time would certainly understand the mixed signals between biology and morality, even if their reactions wouldn’t normally be as severe as Deanie’s.

This film sports an Oscar-winning script, and it’s not hard to see why. Splendor in the Grass runs close to the edge of being completely prurient without going so far that it does more than raise an eyebrow or two.

There are also good performances all around, notably Warren Beatty and Pat Hingle. But it’s Natalie Wood who really steals the show. She buys completely into the histrionics that the role requires and doesn’t shy away from giving it everything.

It’s strange to me in a way that this film still dances around the subject matter of teen sex when we’re just a few short years away from the Summer of Love, but time seems to move more slowly in the film industry in a lot of ways. I imagine that Splendor in the Grass broke down some barriers in terms of what a film targeted at teens could cover. It helps tremendously that it’s well acted and a compelling story. I was surprised by this film, and in very much a good way.

Why to watch Splendor in the Grass: Stories for America’s youth lose their innocence.
Why not to watch: The loss of innocence might be too much.