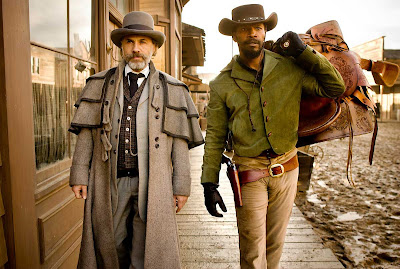 I should say at the start that this will be fully spoiler-tastic. I can’t say I was terribly shocked when Django Unchained was added as one of the 2012 films to The List. The List’s keepers love Quentin Tarantino, including now five of his eight features. I considered watching it a month ago, but I resisted. I have an unusual relationship with Quentin Tarantino and his films. I like some of his films pretty well, but I can’t call myself a fan. Every time I see him, I want to slap him.

Regardless, with the addition of all the new films, I once again have a chunk of movies well over two hours in length. With The Towering Inferno reviewed, Django Unchained was the longest film remaining. And so with no better credentials than that, it was time for a modern Western, and it is a Western despite taking place mainly in Mississippi.

Django (Jamie Foxx) is a recently-sold slave separated from his wife. He is rescued from this condition by Dr. King Schultz (Christoph Waltz), a dentist-turned-bounty hunter on the lookout for a trio of wanted brothers. He knows that Django can identify the three men, so he takes him along. They find the three pretty quickly and kill them all, collecting the bounties, of which Django gets a portion.

Django is looking for his wife, Broomhilda (Kerry Washington). Dr. Schultz offers him a deal: stay with him for the winter, learn the bounty hunting trade, earn some money, and then find out the whereabouts of Broomhilda and then go get her. Django is amenable to the offer and accepts 1/3 of their bounty money; presumably the other part of his share is payment for the training. Come the spring and a little research and the pair discovery that Hildy has been taken to Candyland, the sprawling plantation owned by Calvin Candie (Leonardo DiCaprio).

Candie, fabulously wealthy and decadent, gets his kicks running a fighting ring using slaves who fight to the death. Dr. Schultz comes up with a plan to help get Broomhilda her freedom. The two will go to Candyland under the pretense of starting their own fighting ring and with the plan of buying one of Candie’s fighters. They’ll offer a ridiculous amount for him, sealing the deal, and then, almost as an afterthought, offer to purchase Hildy. They’ll ride off with her, never returning to seal the deal for the fighter. It’s a pretty good plan. Of course it doesn’t work out that way because of Candie’s sharp-eyed and extremely dedicated (and unfortunately named) house slave Stephen (Samuel L. Jackson). He sees through the plot, which causes the third act.

Since this is a Tarantino revenge fantasy, there are really only two possible third acts. In the first, Hildy dies and Schultz dies and Django kills everyone. In the second, Schultz dies, Hildy lives, and Django kills everyone. That’s really the only mystery here. While hyper-violent and profane to the extreme, Tarantino’s scripts are remarkably conservative in sticking to the sensibilities of plot resolution created in the 1940s and ‘50s. The good guy is going to win, the mentor character is eventually going to die (fueling the mentee’s rage), and all of the bad guys will die in spectacular fashion.

This is a difficult film for me to judge for a couple of reasons. The main ones are that I neither liked it as much as I hoped, nor as much as almost everyone else in the world. Given my ho-hum opinion on Tarantino to begin with, this looks like I went into the film set against it from the beginning. There may be some truth in that, but in my defense I have been mainly positive about three of the four films of his I have reviewed previous to this one.

But Django Unchained has some problems that I can’t ignore. The first is its length. The first half of the film goes by lightning-fast. I was an hour from the end when it felt like I was an hour from the start. The end drags, though. It becomes a parade of the sort of violence Tarantino loves. It’s great in small doses, but for in a long stretch it feels interminable. There are pieces that could be snipped to bring the length down half an hour, which would make for a very speedy two hours and fifteen minutes.

Another issue is the language. There are more N-bombs in Django Unchained than in the history of television, all of Spike Lee’s films, and any two rap albums of your choice combined. It becomes a word as frequently uttered as “the” as the film continues. It didn’t bother me initially, but as the film continued, it became oppressive. I didn’t object to the word in the context of the story; I just got tired of hearing it as a part of virtually every sentence.

It’s also too predictable. Hildy was the only character whose fate I didn’t know within two minutes of being introduced. Django isn’t going to die; he’s going to enact a terrible revenge. Schultz has to die because that’s his role. None of the villains will live because that’s their role, too. Kerry Washington as Broomhilda is criminally underused here. Her entire function is to look scared, scream, and speak a few lines in German. Unlike Tarantino’s earlier badass heroines, she’s little more than window dressing, a prize for Django.

And a lot of this is simply unnecessary. The long conversation about the Klan hoods, while funny, doesn’t really add much to the film. The actual ending comes a couple of minutes too late. Once Django arranges to blow up Candyland, do we need Broomhilda’s golf clap or Django showing off on his horse?

I’m ultimately disappointed because of how much I liked the first two-thirds. A tighter and less gratuitous conclusion would have made this my favorite of Tarantino’s films. There are great moments in the first two hours; if nothing else, there’s a singular pleasure in seeing Jamie Foxx wield a whip while dressed in a blue Little Lord Fauntleroy suit. Instead, the third act drags it down to being a good and memorable film, but not a great one.

Why to watch Django Unchained: Because revenge films are always fun.
Why not to watch: The third act doesn’t live up to the first two except in terms of violence.