(Not so) Dark Shadows 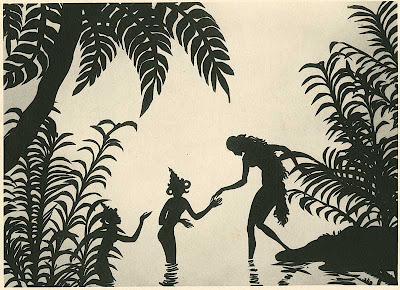 The DVD of Die Abenteuer des Prinzen Achmed (The Adventures of Prince Achmed) opens with an explanation that there are no surviving original prints or negatives of this film. What we have was cobbled together. And then this bit of information fades and the film begins. We are introduced to the images of the half a dozen of the principle characters, and I knew that this was going to be one of those films that I immediately wondered how it had been ignored from The List for the first nine years. I knew in those first couple of minutes that this would be one of my favorites of the new additions. It is spectacular and completely original. I have never seen anything like it.

Die Abenteuer des Prinzen Achmed is reputed to be the first full-length animated feature, beating Snow White and the Seven Dwarfs by more than a decade. It also finally represents the year 1926, the only year between 1920 and 2011 that didn’t have at least on film of required viewing. As I said above, I can’t imagine how this was left out of the first volume.

The film is a pastiche of stories based loosely on the 1001 Arabian Nights. We start, after the introduction of the characters, with the creation of a magical horse by a powerful magician. The horse, thanks to levers on its head and tail, can fly and return to earth. The magician presents the horse to the Caliph on his birthday, but refuses to sell it and will not give it away. The Caliph offers the magician any treasure for the horse and the magician, as was evidently his plan the whole time, selects Dinarsade, the Caliph’s daughter and the brother of the eponymous Prince Achmed. While the Caliph’s court deals with the effrontery of the magician, Achmed is tricked onto the back of the flying horse and sent sailing into the sky where he learns over time to control the animal.

What follows is a series of adventures. Achmed rescues the beautiful princess Pari Banu from the demon-haunted islands of Wak-Wak, only to be thwarted by the same magician, who wants his horse back. Achmed pursues the magician and his kidnapped love around the world, befriending a witch and eventually meeting up with Aladdin. Naturally, it all comes down to a final confrontation between Achmed and his friends against the terrible magician.

There is very much a sense of grand adventure to this film, something akin to The Odyssey or the Voyages of Sinbad. It’s a tale of love at first sight and demons and monsters and high adventure in exotic locations. It’s impossible not to be enchanted by it on this level alone. Prince Achmed is a natural adjunct of Indiana Jones or Perseus. There’s even a reference toward the end to the 12 labors of Hercules.

However, even the entertaining series of stories and vignettes is not the sell of this enchanting film. What makes Die Abenteuer des Prinzen Achmed worth watching is the animation itself. Snow White and the Seven Dwarfs is still the first full-length film of traditional animation, because this is filmed entirely as shadow puppets. We are given gloriously detailed silhouettes of the characters that are painstakingly animated frame by frame and movement by movement. These are extremely detailed for mid- and long shots, and even more detailed for close-ups, where each character is given facial features and moving eyes.

It is, in a word, astonishing. I can’t imagine the amount of work that went into producing these images and in making the puppets move so beautifully. While perhaps not as extreme as a film like Chicken Run with its massive cast of characters, it is also much earlier, and had a presumably much smaller crew. The effect of the shadows and the painstaking animation is nothing short of magical.

In truth, Die Abenteuer des Prinzen Achmed is fluff in terms of the story and the way everything works out. The reason for viewing isn’t to see the plot, but to experience the spectacle and the artistry that went into making this film a reality.

In other words, I find it difficult to believe that someone could watch this an not be enchanted by it simply because of the way it looks. That the story is fun and exciting and filled with danger and romance is an added bonus. It’s truly special.

Why to watch Die Abenteuer des Prinzen Achmed: It’s inexplicably gorgeous.
Why not to watch: Your heart is stone.