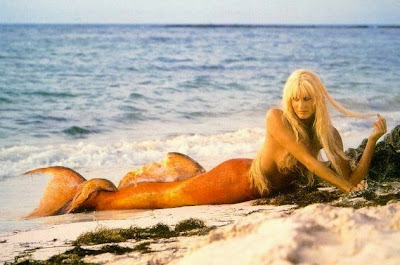 It wouldn’t be too much of a stretch to suggest that 1984 was a formative year for me. It was the year I started my senior year of high school. I am very much a child of the ‘80s, as the decade encompasses my high school and college years in the main. So when this 1984 Blogathon was proposed, I jumped in. I decided to go for a film that I knew I could locate easily (as in one I own) and that I hadn’t seen before. And so I picked Splash.

I’ll say right off that one of the things that Splash has going for it is that Daryl Hannah is in it playing something other than a human being. Hannah is at her best in this situation in my opinion. I’m rarely impressed with her when she plays a regular woman, but make her a mermaid or a replicant, and she can pull it off pretty well.

We start in black and white, with a family on a ferry off of Cape Cod. A young Allen Bauer thinks he sees something in the water and jumps in. While under water, he sees a young girl under the water with him. In his mind, the young girl is a mermaid, something he eventually attributes to a near-death hallucination. Flash forward to the film’s present and Allen Bauer (Tom Hanks) is now running a successful wholesale fruit business despite the interference of his womanizing and bad habit-infused older brother Freddie (John Candy).

While the business is successful, Allen’s love life is a complete mess. His latest girlfriend dumps him the day before one of Allen’s employee’s wedding, which causes Allen to get too drunk at the reception and to eventually leave and go to Cape Cod, where he always feels better. Here he meets Walter Kornbluth (Eugene Levy), an extremely paranoid scientist who refuses to take him out to the nearby island. Allen instead hires a boat from a local. When the motor conks out halfway across, the owner of the boat dives into the water to retrieve his other boat. Frustrated, Allen tries to start the motor himself. When it starts up, he is tossed out of the boat, which starts driving in a circle. Allen, unable to swim, is unable to get out of the way when the boat comes around and strikes him in the head, knocking him unconscious.

The next thing we know, Allen is on land and there is a nude woman (Daryl Hannah) nearby. She doesn’t talk, but eventually runs into the bay and disappears. We learn right away that this is a mermaid. For Allen, it’s just a weird experience. The mermaid has his wallet, though, and when Allen returns to New York, she eventually follows him, cause a huge sensation for walking up to the Statue of Liberty nude, gets arrested, and eventually gets in contact with Allen, since she was holding his wallet.

Thus begins a whirlwind romance. The mermaid eventually takes the name Madison, learns English, and explores the surface world. No one knows that she is a mermaid. According to this version of the legend at least, she has a tail when wet, but it turns into legs when she is dry. All Allen knows is that she has a secret and he can’t know it, and that she can only stay in the city for six days.

Meanwhile, it turns out that Walter Kornbluth is a scientist (of a sort), who is convinced about the existence of mermaids, and thus spends a great deal of the film attempting to douse Madison to prove he isn’t crazy. When that finally happens, in comes the military and other scientists to poke, prod, and otherwise experiment on her. This is a problem for Allen, who has, of course, fallen for the fish girl.

So it’s a fantasy romance. Splash is fluff, but it’s fun fluff. There’s not a moment of substance here, and the comedy is so broad that it’s impossible to take any part of it at face value. This is 1980’s sitcom broad, the sort of situation that isn’t even really believable within the context of the movie. A mermaid? Really? C’mon. Even if that is forgiven, nothing else really approaches how the world works. Characters do things that would get them arrested and consistently get away with it, or at least manage to avoid jail time.

But it kind of doesn’t matter. This isn’t supposed to be taken seriously. It’s supposed to be cute and entertaining. This is light, not some sort of science fiction treatise on what makes us human by showing us the humanity of the mermaid character. Nope. This is all about the fun, about watching Eugene Levy’s character get hurt, about John Candy telling stupid jokes, and about the romance between Allen and Madison. There’s an interesting tolerance message to be taken from the film, but even if that’s avoided, the film is all about the funny, or is at least mostly concerned with the audience’s enjoyment.

Splash is a fun movie. I won’t go so far as to call it great by many standards, but it is entertaining. You have to hand it two the makers of the film: they almost certainly had a good time filming it

Why to watch Splash: It’s fun in the way that only an ‘80s movie can be.
Why not to watch: It’s almost certainly responsible for Mannequin.