Who Wouldn't Fall in Love with Audrey Hepburn? 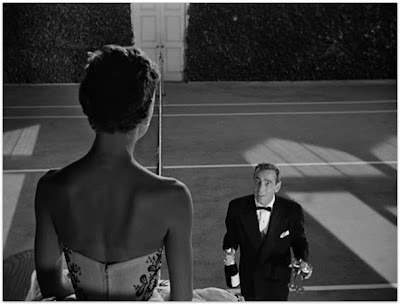 The 1954 Sabrina is one of those cases where I’m far more familiar with the remake than with the original. I’ve seen the 1995 version of Sabrina a couple of times, but have never seen the original until today. The remake is extremely accurate to the original, which says a lot for it. I like the remake quite a bit. It’s cute. Then again, the original has Audrey Hepburn, Humphrey Bogart, and William Holden. It’s hard to compare anything to that cast.

On Long Island sits the estate of the Larrabee family. The Larrabees are a business family with dozens of interests. Father Oliver (Walter Hampden) and mother Maude (Nella Walker) are retired, leaving the business in the hands of elder son Linus (Humphrey Bogart). Linus is all business, letting up for nary a moment. All of his free time is thus taken up by his younger brother David (William Holden), a thrice-married playboy and polo player who has never done a serious day’s work in his life.

Over the garage of the Larrabee estate lives Fairchild (John Williams), the chauffeur, with his daughter, Sabrina (Audrey Hepburn). Sabrina, as it happens, is desperately in love with David Larrabee, who has never really noticed her. To combat this, her father is sending her away to Paris to culinary school, hoping that she’ll outgrow her obsession with David in the two years she’ll be gone. Not wanting to go, Sabrina makes a failed (and moderately funny) attempt at suicide by turning all the cars on and closing the garage door. She’s discovered by Linus, who seems to understand what she was doing but has the good sense and taste not to let on. Off Sabrina goes to Paris, where she turns into, well, she turns into even more Audrey Hepburn than she started out.

Let me take a moment here to say this. Movie or not, if you’ve got the chance to look at Audrey Hepburn in the flesh every day and you don’t, you don’t deserve her. Shame on you, David Larrabee. Anyway.

Sabrina returns, a woman of the world, and through a chance encounter, it is David who picks her up from the train, not recognizing her. Instantly smitten, he forgets all about his impending fourth marriage to Elizabeth Tyson (Martha Hyer), the heiress of a family owning huge interests in sugar cane. This is important, because Linus’s company is sitting on a patent to turn sugar cane into a new, virtually indestructible plastic, which means that the company has a great deal riding on the eventual marriage between Elizabeth and David. Realizing this, Linus acts quickly to keep David out of Sabrina’s field of vision and inserts himself, romancing her to keep her away from his brother. And, of course, in the process he falls victim to Sabrina’s charms himself. I mean, who wouldn’t?

And really, that’s the whole movie. And that’s all we really need. A beautiful, complicated little love triangle with three of the most celebrated actors of the era. Better, it features a screenplay from the great Billy Wilder, who was smart enough to pepper even the darkest of his screenplays with some fantastic dialogue and humor. Case in point, right at the start, Sabrina tries to kill herself with carbon monoxide. She closes up the garage and starts all the cars. And then, when she starts coughing…she opens a window, which is the thing you wouldn’t do if you were trying to kill yourself with carbon monoxide. It’s a dark scene, a young girl trying to kill herself, but it’s also surprisingly light and funny.

So is it worth watching? Yeah, it absolutely is. My biggest problem with this version of the film is the age difference between our principle cast. Bogart was 30 years older than Audrey Hepburn, and he looked it, and that makes the romance a little hard to take. It’s much easier to deal with the 10-year difference between her and William Holden. If you can get beyond that (and it’s not much different than the age difference between Hepburn and Cary Grant in Charade), there’s nothing here not to enjoy.

Why to watch Sabrina: Do you need more than the cast and an achingly sweet romance?
Why not to watch: If you’ve seen the remake, this one won’t have any surprises for you.