Is It Tsar or Czar? 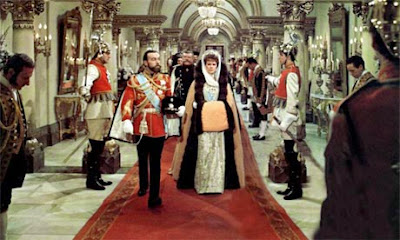 Epic films aren’t always my thing. There are, of course, epics that I really like and there are epics that I wonder why I’ve watched. With a stack of movies near or exceeding the three-hour mark on my current list, I figured it behooved me to go about my old strategy of trying to knock out a couple of the longest films on the list every month. With that in mind, I requested Nicholas and Alexandra from the library, and here we are.

As might be deduced from the title, this is the story of the end of the Romanov Dynasty in Russia. Put a different way, this is the story of how the Bolshevik revolution happened and Russia became a communist state. And, as befits the title, it is told from the point of view of the Romanovs themselves rather than from that of the revolutionaries or from a more general historical perspective. What that means for us is a lot of pomp and finery coupled with scenes of the revolutionaries plotting their overthrow and a lot of shots of the suffering peasants. That’s often the way this sort of thing works—juxtapose the rich people with the poor people, in part to show why the poor people revolted. Here, by focusing on the Romanovs, we get a chance to see why that revolt is supposed make us sad. Or something.

The film starts at the end of the Sino-Russian War, which Russia lost. The whole point of the war was to gain a warm water port on the Pacific, which meant taking Korea. It cost a lot of men (that seems to be a theme for Russian wars in general) and the loss damaged the stature of Czar (or is it Tsar) Nicholas II (Michael Jayston). His other problem is that after a collection of daughters, he finally has a son, who is then diagnosed with hemophilia. This means that the crown prince of the Russian monarchy will be lucky to live through puberty. We discover that Tzaritza Alexandra (Janet Suzman) is kind of smothering as a mother and as a wife and that Nicholas cannot deny her anything. This is also where we are introduced to the man who will become Alexandra’s closest and most controversial advisor, the “mad monk” Rasputin (Tom Baker).

And then we skip forward a decade to the eve of World War I. Nicholas has given in to a number of peasant demands and is still having a huge number of problems running his massive country. One of the biggest problems he has is that the size of his country is enormous. Another massive problem is that Russia is, in terms of the world stage, horribly backward. Third, of course, is the increased influence of Rasputin over his wife. Rasputin’s control of Alexandra is almost complete, telling her to mistrust those who are loyal to her husband and put faith in men who don’t deserve it. However, she is convinced that Rasputin keeps her son alive.

And then World War I starts, which causes its own set of problems. The army, while massive, cannot be properly armed and outfitted. Soldiers are rationed to three bullets per day. Worse, it is a war with Germany, and Alexandra is German, turning the people against her. During all of this, the Bolsheviks are plotting to overthrow the government and install a communist “paradise” by any means necessary. Of the principle plotters, we spend the most time with Lenin (Michael Bryant), Stalin (James Hazeldine), and Trotsky (Brian Cox). Eventually, because of mismanagement and rioting, Nicholas is forced to abdicate, allowing the Duma (essentially a parliament) to take over. And, of course, the Romanovs are eventually rounded up by the communists. If you don’t know what happens to them, I won’t spoil it for you, but it’s not that hard to figure out.

There is a huge problem at the heart of Nicholas and Alexandra, and it’s one that this film finds impossible to avoid. Put bluntly, the Romanovs are by far the least interesting part of the Russian Revolution. The war effort, the Cossacks, the actual revolution itself, and the communist plotters are far more interesting than the Romanovs, but it’s with the Romanovs that we spend the bulk of our time. We are left without an update on the communists for more than an hour at one point, instead seeing people in fancy dress talking about supply lines and their hemorrhaging son.

Janet Suzman was nominated for this performance and it’s a good performance, but I’m not convinced it’s a great one. Her role generally consists of panicking and crying a lot and being amazingly demanding on everyone around her. Michael Jayston’s performance evidently consists of staring a lot. I’m not sure the man visibly blinks once. For my money, the real genius casting here is putting Tom Baker in as Rasputin. I’d love to say the same about Brian Cox as Trotsky, but he’s just not in the film enough.

Flatly, Nicholas and Alexandra was a disappointment. I can certainly see it as a grand effort, but it’s grandly dull. Not even the late presence of Ian Holm or John Wood can stave off the fact that this goes on too damn long. The end is almost a relief despite what it is.

Why to watch Nicholas and Alexandra: Tom Baker as Rasputin? That’s genius!
Why not to watch: It focuses on the least interesting part of the Bolshevik revolution.