Film: I Compagni (The Organizer)
Format: Streaming video from Hulu+ on laptop. 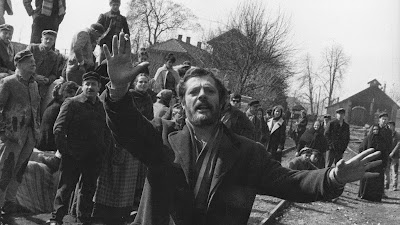 Fifteen minutes into I Compagni (The Organizer) and I paused the film. I was sure that this was made by Vittorio de Sica since quite a bit of it reminded me of Ladri di Biciclette. No soap, though. This is a film by Mario Monicelli, so any similarities to de Sica are either coincidental or homage.

Evidently, the world needed more films about the poor and oppressed workers of the world, because that is precisely where we’re going to be for the vast bulk of this film. Specifically in this case, we’re going to be in Turin, Italy, and dealing with the workers of a massive textile factory around the end of the 19th century. As with many factory workers during all stages of the Industrial Revolution, the workers here are the very definition of oppressed. We see young Omero (Franco Ciolli), a teenaged boy who by all right should be in school, getting up before the sun to get to work. The workday starts at 6:00am and ends at 8:30pm, with a half hour break for lunch. It’s not specifically brought up, but I’d suspect that it’s also a six-day work week. Our first day in the factory with the workers concludes with an old man getting his hand caught in one of the massive machines.

This accident, for which the other workers take up a collection, also sparks a desire to make some changes in their lives. The workers decide that a 14-hour day with only a 30-minute break isn’t enough, and reason that the accident and others like it are caused by fatigue. They resolve to quit work an hour earlier the next day. Pautasso (Folco Lulli) volunteers to blow the quitting whistle an hour early to have the machines shut down, and everyone will go home. The plan fails miserably, Pautasso is reprimanded, and everyone stays at his or her machine until the normal quitting time.

As it happens, just as the Turin workers are starting to think about organizing themselves, Professor Sinigaglia (Marcello Mastroianni, almost unrecognizable behind glasses and a beard) arrives by train. Sinigaglia is a labor organizer who has escaped Genoa with the police on his trail. He immediately takes up the cause of the textile workers and begins to organize them, arranging a strike. In an effort to make the strike easier on everyone, he tells them all to stock up on food and to use credit to do it; once the strike starts, there will be no credit for anyone.

The strike actually starts to work a bit. The bosses call for a meeting and offer a couple of trifles to the workers, who refuse because nothing in the way of a shorter work day or a longer break is on the table. The bosses start bringing in scab workers from another town where everyone has been put out of work. The Turin workers go to the train to stop them and a melee breaks out and Pautasso is killed by an incoming train. But under Sinigaglia’s insistence, the workers stay firm to the strike, getting the leaders to the point of caving. But then Sinigaglia’s past starts to catch up with him—he is a wanted man after all, and as the heart and soul of the strike, his disappearance would cause the movement to lose heart, leading us into the concluding 20 minutes or so.

I Campagni is Italian neo-realism at its finest. Our characters are the downtrodden, salt of the earth types that make the genre what it is, and our conclusion is precisely in line with what we should expect from the genre. There aren’t any winners among the poor here, just a few people who happen to lose a little less than the others. Sure the people in charge take a financial hit, but not to the extent of the poor, and they’re also better disposed to weather it. No, the entire point of the film is that the wealthy win and the poor either tread water or drown.

This is not a film that I honestly looked forward to watching and not one I’d relish watching again. I don’t mind a film that has a depressing ending or even one that rips out my guts. I just don’t necessarily want to watch it a second time or wallow in it. I Campagni is as good a film as you’ll find for its style and era. Just be prepared for it being the sort of film that means staying away from razor blades for a couple of hours.

While it could be argued based on the title that Sinigaglia is the main character, an argument could easily be made for the man Sinigaglia ends up living with. Raoul (Renato Salvatori) is unimpressed with the strike at first but ends up the most converted of all the workers, and by the end of the film, is the one most willing to carry on the work of Sinigaglia.

What I appreciate more than anything is that a film like this avoids the obvious Hollywood-izing of the plot. There is only one moment of this. A soldier at a nearby barracks begins a relationship with Omero’s sister, only to eventually be called in to put down a riot, which leads to a conflict that is straight out of the Hollywood playbook. It’s an unnecessary moment in an otherwise stellar film.

So there it is—a hell of a film, but only if you don’t mind sticking your head in the oven when it’s done.

Why to watch The Organizer: We need to be reminded of the stories of the downtrodden.
Why not to watch: Because nothing ever changes.