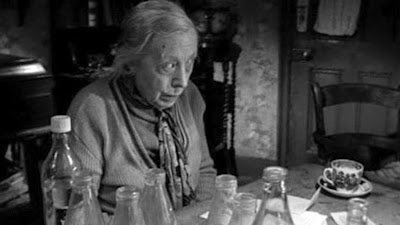 Lately, when I’ve watched a film that was nominated only for Best Actor or Best Actress, I’ve found a film that is relatively forgettable save for that one nominated performance. This is more or less what I expected with The Whisperers, a forgotten film from the year of my birth. There is, certainly, some element of truth in my expectations, but The Whisperers is far more than a forgettable film with a great performance. No, this is a film that really should be better known than it is. In addition to the justifiably nominated performance, there is a true darkness in this film and a story that is noteworthy in its brutality. This isn’t a film I’d want to watch if I was already depressed, but it’s a hell of a nice piece of dark theater.

Mrs. Ross (Edith Evans) is an elderly woman with her own series of issues and problems. In the main, she is extremely paranoid, under the belief that people are listening to her through the walls or the sink faucet. She reports things that she believes to the local police. It is her belief, for instance, that the white woman who lives above her with an Indian man is being held against her will. She’s also evidently suffering from dementia. She believes that she is descended from royalty, and that the welfare that she gets to keep her alive is something only temporary, since she is constantly expecting a windfall of money from her father. None of her delusions come close to even approximating reality.

Out of the blue, her criminal son Charlie (Ronald Fraser) shows up out the blue, promising her a present if she lets him into the apartment. In reality, Charlie has a parcel full of money that he hides in the apartment. He then promptly disappears. Mrs. Ross finds this soon enough and decides that this is the windfall of cash that she was expecting. She even goes to the welfare office to tell them that she will no longer need the welfare. However, she is waylaid by another pensioner (Avis Bunnage) who leaves the office with her, gets her drunk, and essentially kidnaps and robs her, eventually leaving her in a ditch by the side of the road.

Naturally, she doesn’t come through this unscathed, winding up in the hospital with a severe case of pneumonia. Her welfare worker (Gerald Sim) helps track down her missing husband Archie (Eric Portman) and forces him to return to his demented, crazy wife, a situation that neither of them really want. From here, it just gets darker, but I won’t go into spoiler territory.

A great deal of this film centers on the incredible performance of Edith Evans, who is more than simply believable in the role of a sick, mentally addled old woman. There is not a moment in this film in which she isn’t completely perfect in this role. This is a classically pathetic character in the original sense of the word. At every moment, the viewer feels nothing but pity for her, but also a sense of revulsion at her squalid living space and obvious insanity. Edith Evans’s performance is simultaneously moving and terrifying. While this is not a horror film, there are elements of it throughout, a deep sense of unease. While some of this comes from the situation, the black-and-white cinematography, the use of camera, and the absence of music, by far the majority of it comes from Dame Edith herself.

Some credit needs to be given to Eric Portman as well. While Archie isn’t in the film for a great length of time, he is a riveting character when he is on screen. In many ways, he is the embodiment of someone like Alfred Doolittle from My Fair Lady. He has no real positive qualities. While Doolittle is played for comic relief, Archie is the darker side of the character type. He would be malevolent were he not afflicted with a chronic laziness that is his most defining characteristic.

What I can’t say is that I enjoyed this movie. I am, however, undeniably happy that I found this film online and had the opportunity to watch it. Evans is absolutely the reason to spend any time with this, but beyond that, there’s a lot here to see and a great deal to walk away with, feeling mildly dirty and unsettled. If you’re in the mood for that kind of film, you could do a lot worse than this one.

Why to watch The Whisperers: Edith Evans gives the definition of a tour de force performance.
Why not to watch: How much do you want to delve into despair?