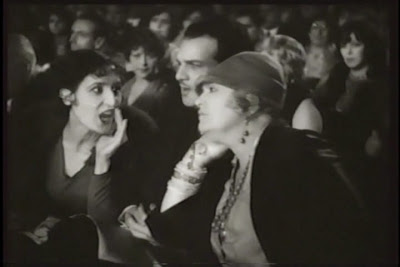 One of the downsides of working off any list of movies is that I know for a fact when I’ve reviewed one that won’t get many hits or comments. Weary River is just such a case. If I cared about page views more than completeness, I’d have never bothered with a dipstick of a film like this one. Weary River may have been what people wanted in 1929, but I can’t imagine that anyone would be lining up for it now. I’m the third person to tag this film as viewed on Letterboxd, and that’s saying something.

So why isn’t this worth your time? I’ll try to make this brief. Jerry Larrabee (Donald Barthelmess) is a hoodlum who spends his spare time singing and playing the piano to entertain his mildly speech impedimented girlfriend Alice (Betty Compson). Jerry’s gang is running afoul of a gang run by a man named Spadoni (Louis Natheaux). What Jerry doesn’t realize is that Spadoni is aching to get rid of his rival. He pays someone to take a bullet in the 1920s equivalent of a drive-by and the guy names Jerry as the trigger man. We don’t find this out until later, but we know that Jerry isn’t guilty of this particular crime.

So, Jerry is sent to prison where he encounters the lovable and fatherly warden (William Holden…not that William Holden). He turns his talents to music, penning a new crooner called (what else?) “Weary River” that he sings on the prison’s radio show. The song becomes an instant hit, and since Jerry has become both a model prisoner and a popular entertainer, he’s released. Things don’t go well on the outside, though. At every performance, Jerry hears the audience whispering about his being a convict. Worse, the warden has convinced Alice that the only way Jerry can go straight is if he stays away from all of his old contacts, including her.

Eventually, down on his luck, Jerry winds up with his old gang, finds out that Spadoni framed him, and decides that something needs to be done. It doesn’t matter that Alice wants him out of the rackets and still loves him. No, he needs to confront Spadoni and get his life back, even if that means going back into stir.

Very little in this movie actually works. The premise is decent, and could make a pretty compelling story. At its heart, this is the story of a criminal going straight and the woman who loves him deciding that she loves him so much she’d rather live without him than continue corrupting him. There’s a story worth telling and worth seeing in that. It’s just that Weary River isn’t that story.

One of the biggest problems is that there are absolutely no gray areas. Jerry is either the tortured and sad crooner who wants to go straight or a vicious thug. He vacillates between the two positions with no middle ground. When he reunites with Alice, he’s ready to go straight and try his hand at singing again. The minute he finds out that Spadoni is out for him, he immediately because a gangster again, like ripping off a mask.

Another problem is that it simply doesn’t go anywhere close to reality. It’s entirely conceivable that a convict could become popular on the radio, but it hardly seems believable that having a popular song on the radio would get someone released from prison. The warden character himself is a combination of Gandhi and Jesus, and the sort of person who only really exists in movies. It’s a half step away from instant diabetes. Alice, too, is noble to the point of idiocy. I just don’t believe in a character like that. She goes from living in a penthouse to a slum and refuses to do anything about it because she can’t let Jerry ever find her. She vacillates as much as Jerry does anyway. She’s a tower of Jell-o, and it would seem that any stance she takes exists only until she decides to change her mind.

Worst, though, is the damn song. Once “Weary River” gets played for the first time, it never ends. We hear it a full four times with lyrics by the time the film winds up, and we hear it the first time about mid-way through. Once it’s played once, though, we’ll be hearing it as background and ambient music for the second half. It’s not that great of a song in the first place, and to have to hear it that mean tims in so short a period is aggravating.

Weary River has been pretty solidly forgotten, and with reason. There’s not much here worth remembering.

Why to watch Weary River: An interesting blend of silent and talkie.
Why not to watch: It’s the worst kind of boring.