Film: Up
Format: DVD from NetFlix on rockin;’ flatscreen. 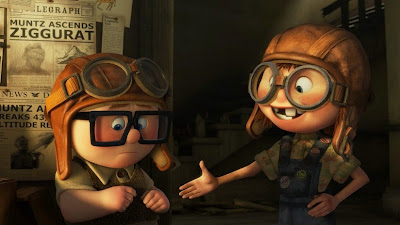 When Pixar puts out a dud of a film, like Cars 2, it’s both understandable and incredibly frustrating. On the one hand, not everyone hits a home run every time. On the other hand, expectations are so high for Pixar films. Over and over again, they seem to do the impossible. Up shouldn’t work. This is a movie made for kids and the main character is in his 70s and uses a quad cane. And yet it works because Pixar is smart enough to stick to what works for them: they write good stories that touch on something real and human in everyone. Up defies expectations because it lives up to what we expect from Pixar.

The reason their films work is because they avoid stereotypes as much as possible. Oh, they’ll play with them now and then. Carl Fredricksen (Ed Asner) is very much the stereotype of an old curmudgeon. His putative sidekick, Russell (Jordan Nagai), however, is not what we’ve come to expect. Jordan is chubby, excitable, earnest, and Asian. But he’s a kid before he’s any of those things, which makes him completely believable. He’s a real kid, not an Asian stereotype forced into a movie.

I’d been warned about the opening sequence. The people who warned me were right. There’s a real sweetness to the nearly wordless opening. We start with Carl as a young child entranced by the reality of a man named Muntz (Christopher Plummer), an adventurer of the old school. Carl dreams of himself following in Muntz’s footsteps and he encounters Ellie, who is of a similar mind. The two become inseparable, and the following sequence takes us through their life together. It is…it’s the sort of thing that is going to be studied for the next 100 years in film classes. This is true storytelling, as pure and as beautiful as it can be done. Carl and Ellie dream of going to Paradise Falls in Venezuala. They discover they cannot have children. They grow old together, and eventually, Ellie gets sick and dies. All of this comes across in a couple of minutes, and it’s a think of absolute beauty. And with Carl walking home from Ellie’s funeral, our story really begins.

The story in a nutshell is that the area around Carl’s and Ellie’s home is under massive development, and the developers want Carl to sell. He refuses, acting as a thorn in the side of the builders. When one of the builders drives a truck into the mailbox, Carl gets angry and hits the man over the head with his cane. A court date later, and Carl has been considered a public menace and is forced into a retirement community. But he has other plans. Carl uses his stock of helium from his old balloon business and attaches thousands of balloons to his house, and floats it away, heading for Paradise Falls. Unbeknownst to Carl, Russell, a young Wilderness Scout attempting to get his final merit badge was under his porch at the time of liftoff, and is thus coming with him to South America.

What happens is, really, pretty standard kids’ adventure movie stuff. Russell and Carl encounter problems on the trip down and eventually land. There they discover that Muntz is still around, still looking for the elusive giant bird he has staked his reputation on. Muntz hunts for the bird with a cadre of dogs that have been fitted with special collars allowing them to talk. The most relevant for the story is Dug (co-director Bob Peterson), who does drop into the realm of stereotype. Dug is friendly, distractible, and immediately loyal to Carl and Russell. Dug is, in many ways, the warm, fuzzy heart of the film, and a character with the potential to become immediately beloved.

So why does this whole thing work? Because the writers decided to create characters and a story rather than make something based around a vehicle to sell toys. Pixar is smart enough to treat its audience with respect rather than as consumers. And it works. It works because everyone wants stories and no one likes being talked down to. Pixar’s writers treat kids and adults not like we are consumers of product, but consumers of tales.

So, Up works, and it works perfectly. The opening 10 minutes sets up everything beautifully, and the rest of the film delivers us a story that lives up to the opening. Sure, the story toward the end might be a bit predictable. And so what? It’s still a film that manages to be sweet and affirming without being maudlin. And more than anything, it’s notable because no one would have believed a film centered on an old man would be entertaining for kids. Yet it is.

I’m still missing some Pixar films, and I know they have a few duds. But Up isn’t one of them. For all its imaginative storytelling, at its heart, it’s a story of friendship and love and of trust, and really, that’s what most of us want.

Why to watch Up: Because it’s Pixar being Pixar.
Why not to watch: For the first 10 minutes or so, you’ll have something in your eye.

Posted by SJHoneywell at 6:01 PM