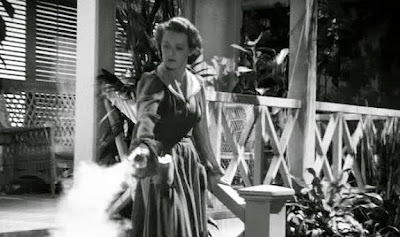 It’s interesting to consider the 1940 version of The Letter a film noir even though it is a solid early example of the style. The reason it feels weird is that this is a remake of a film first made in 1929. I haven’t seen that version yet, so I don’t know how much it conforms. My guess is that it probably doesn’t much. This version, though, is very solidly a noir, having all of the main elements that the noir aficionado looks for. What makes it unusual is that in this case, the femme fatale isn’t the pursuit of the main character, but the main character herself.

The Letter has one of the better openings of a film I’ve seen in at least a year. We open on a quiet Malay night. The moon is high. Rubber drips from a tree into a waiting bucket. The plantation workers are preparing themselves for bed. A shot rings out. A man staggers out of a building onto a porch and stumbles. Leslie Crosbie (Bette Davis) follows him out, watches him fall, and empties the gun into the body on the ground. I couldn’t help but think I was in for a treat after the first minute or two.

Sadly, the rest of the movie doesn’t live up to that staggering opening. Fortunately, it makes a valiant attempt and comes pretty close. Leslie claims that the dead man had attempted to “make love” to her. Since this is the 1940s, we don’t specifically get as far as her claiming rape, but she does claim that the killing was in self-defense. Her husband Robert (Herbert Marshall) comes to her defense and hires for her his friend Howard Joyce (James Stephenson) as her lawyer. For Joyce, the case is a simple one. The dead man attempted an unwanted advance, Leslie defended herself, case closed.

Ah, but it can’t ever be that simple, can it? Howard’s assistant, a local named Ong Chi Seng (Victor Sen Yung) approaches the lawyer with a bit of news. Despite Leslie’s protestations to the contrary, there is a letter in her hand written to the dead man on the day of the shooting. More incriminating, that letter demands that he come visit her that evening, specifically because her husband will be away. Finally, Howard gets the truth out of Leslie. Knowing what the consequences will be if that letter appears at the trial, he is slowly convinced that he should buy the original to keep it out of the testimony. He does this despite the risk he runs of being disbarred for the action.

Everything really does center around that letter, because purchasing it from Mrs. Hammond (Gale Sondergaard), the dead man’s widow, costs the entire bankroll of the Crosbies, everything Robert has worked for and saved over the years. Worse, Robert knows nothing of this, and knew nothing of his wife’s relationship with his friend. More and more, the letter makes it appear that Leslie’s crime was premeditated rather than self-defense.

There’s the set up. There’s actually quite a bit more going on here than the paragraphs above would indicate, and much of it comes directly from Leslie’s inability to be truthful with anyone if it means implicating herself in anything. As much as she wants to avoid punishment for murder, she also wants to protect her own name and reputation, and at some level to protect her husband from the pain that would come from knowing his wife had been unfaithful to him for years.

Bette Davis, of course, is nearly perfect. She’s in the sweet spot of her career in 1940, although she had a larger and longer sweet spot than pretty much anybody in history. Davis plays Leslie Crosbie as a femme fatale because that’s exactly what she is. This is a dangerous woman who acts in ways to protect herself when she needs to, and damn the cost. Paired against her and with her for much of the film is not her husband, but her lawyer. James Stephenson was and still is a relative unknown. Had he not died the year following this film, it’s likely that it would have been a major springboard to fame and fortune for him. He’s not merely good in the role of the lawyer, he holds his own and matches one of the greatest screen icons of that or any era in every scene he shares with Davis. His Best Supporting Actor nomination was as deserved as Davis’s Best Actress nomination.

And, much of the success here comes from Wyler’s tight direction. That opening sequence is a masterwork of storytelling and efficiency. In a few shots we get our location and in a few more we have our plot masterfully laid out for us. It takes just a moment or two, and we’re completely involved in every aspect of the story.

That the rest of the film doesn’t quite live up to that opening is no crime. Honestly, few films could. With a lesser opening, The Letter would still be an involving noir with the unique aspect of having the femme fatale as the only true main character. With that opening, though, it becomes something worth studying.

Why to watch The Letter: You should watch as much Bette Davis as possible.
Why not to watch: It doesn’t (quite) live up to its opening.