Thankfully, They're not on Screen

Film: A Thousand Clowns
Format: Video from The Magic Flashdrive. 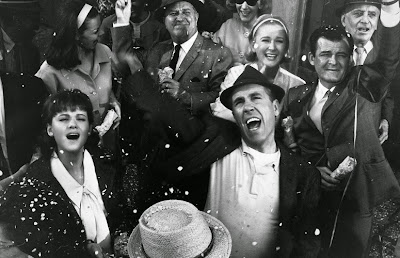 I went into A Thousand Clowns completely cold, knowing nothing about it except that it existed on a flashdrive I got from Chip Lary. I didn’t even know who was in it until it started up and I was treated to the unmistakable face and sound of Jason Robards. This is a film that’s been almost completely forgotten, like a lot of films I seem to be watching lately. It’s kind of a shame, if only for the brilliant performance of Robards and the Oscar-winning performance of Martin Balsam.

This is another film that leaves me in something of a quandary in how to write it up. In terms of plot, it’s pretty simple and straightforward, because it’s far more of a character study than it is a film that has an actual plot. On the other hand, it’s surprisingly intricate in places. There’s a depth here that is surprising underneath the bizarre comedy and strange happenings that occur on screen.

Murray Burns (Robards) is an out of work writer. Five months before the start of the film, he quit his job as a writer on a lackluster children’s television show called “Chuckles the Chipmunk.” Since that time, he’s just existed, doing whatever he wanted, avoiding getting a job, and annoying his neighbors and anyone else he seems to meet. As it happens, he also lives with Nick (Barry Gordon), his 12-year-old nephew. As the film opens, Murray and Nick are visited by two people from the 1965 New York equivalent of Child Protective Services. It seems that Nick has penned an essay on the value of unemployment insurance. This has launched an investigation into Nick’s bizarre home life with his uncle. It has also prompted the visit by a pair of social workers, Albert Amundson (William Daniels) and Sandra Markowitz (Barbara Harris).

As their life is incredibly unconventional, the meeting doesn’t go particularly well. However, Sandra immediately becomes infatuated with Murray and breaks off her long-term relationship with Albert in favor of spending the day and the night with Murray. Albert returns to tell Murray that Nick will be taken away in a couple of days, which gives Murray just two days to find gainful employment with the help of his agent and brother, Arnold (Martin Balsam). And therein lies the problem.

See, Murray doesn’t want to work. He doesn’t want to be just another drone living from day to day and doing what he’s told. His quest for a job is doomed from the start by self-fulfilling prophecy. Murray walks out of meetings in the middle. Even when Arnold begs for his old “Chuckles the Chipmunk” job back, Murray walks out of the phone call, unable to deal with what his life would become back on the workforce.

Up to this point, while the stakes are high, the film is mostly lighthearted and goofy. Murray is difficult not to like in great part because he’s an entertaining and clever son of a bitch. He’s the comedy writer version of Dr. House. But as we spin into the third act, we get a gem of a scene between Murray and Arnold. Murray offers up his philosophy of life, which boils down to the fact that almost everyone walking around is actually dead and merely existing rather than living. Arnold counters with his own philosophy. It’s heartbreaking, sad, and honest, and is almost undoubtedly what put the gold statue in Balsam’s hands.

As it happens, I haven’t seen a single Best Actor nominated performance from 1965, but I was incredibly shocked that Robards’s name doesn’t appear on the list. This is some of the best work of his career, and with a career like his, that’s really saying something. He’s brilliant in this. He’s the sort of person that would be absolutely infuriating to meet in real life, but as a film character, he’s immediately easy to root for. We like him because he has qualities that we wish we had the guts to have ourselves. Primarily, he’s unflinchingly honest. But he’s also completely irreverent, witty, and sardonic. Robards plays him within an inch of his life, which is the only way a character like this could be played.

The final indignity of the film is that Leo, who plays Chuckles the Chipmunk (Gene Saks) eventually comes to the apartment to beg Murray to come back. And we get a firsthand look at the indignities that Murray has had to deal with his in his career. Leo is the sort of guy who treats all kids as if they are five and stupid. Worse, he’s not funny. And for the first time, we get to see Nick stand up to someone.

Nick’s story is actually worth mentioning. Nick is the son of Murray’s unmarried sister, who abandoned the boy at Murray’s apartment seven years previous. At five, Nick still hadn’t been given a name, so Murray made a deal with him. He could call himself anything he wanted, but when he turned 13, he’d have to pick a permanent name. Murray gives us the list of things Nick has used as his name, which include Rover, Big Sam, Little Max, Snoopy, Rex, Lamont, Chevrolet, Left, The Phantom, Rafael Sabatini, and Dr. Morris Fishbein.

I’m not sure I can say I liked this film, but I can say that Robards probably deserved a nomination. He’s the reason to watch here, along with Martin Balsam and to a lesser extent, Barry Gordon.

Why to watch A Thousand Clowns: Jason Robards, Martin Balsam, Barry Gordon.
Why not to watch: It’s really just a character study.