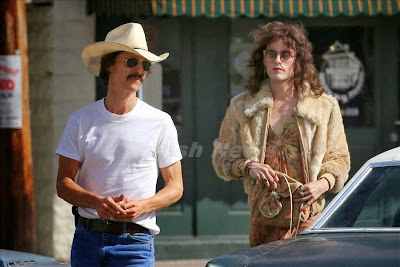 So let’s get one thing straight right off the start: I am not a major believer in Matthew McConaughey. I feel about him about the same way I do Clive Owen or Colin Farrell. I’m suspicious of anything he’s in until I have a good reason not to be. So when McConaughey won the Best Actor Oscar for Dallas Buyers Club, I had hopes that I might like him in this, but I didn’t know for sure.

This is the allegedly true story of Ron Woodroof (McConaughey), who was diagnosed with HIV and eventually AIDS in the mid-1980s, back when the disease was still considered both a gay disease and was almost completely misunderstood. Woodroof is given 30 days to live by Dr. Sevard (Dennis O’Hare) and Dr. Saks (Jennifer Garner). Convinced at first that he has been misdiagnosed, Ron eventually comes to understand that his condition almost certainly came through unprotected sex with an intravenous drug using prostitute. Determined to outlive his 30 day death sentence, Ron learns of experimental trials of AIDS drug AZT and bribes a hospital worker to give him the real drugs.

However, the AZT does not help his condition, and desperate, Ron heads to Mexico where he meets Dr. Vass (Griffin Dunne), a doctor who has lost his license to practice in the United States. A few months under Vass’s care leaves Ron vastly improved. He realizes that he can make a great deal of money selling AIDS drugs not approved by the FDA in the United States. Under that pretense, he takes a massive amount of medication back with him and begins operation. He is assisted by Rayon (Jared Leto), a gay, drug abusing transvestite who has much better connections in the gay community than the fiercely heterosexual Ron.

Over time, Ron develops a new business plan, creating the titular Dallas Buyers Club. The idea is that people don’t specifically buy medications, but purchase shares in the club, which allows them all of the medication they need for $400. The biggest foe of the club is the FDA, who protests Ron’s importation of non-toxic but non-approved medications into the country. Ron also consistently runs afoul of Dr. Sevard since his buyers club customers are affecting the AZT trials. Dr. Saks, on the other hand, is more concerned with assisting patients and begins to sympathize with Ron and the other victims.

And really, that’s how it goes. Saying exactly how everything works out in the end would be spoiling the film, but really, there’s only one way this film can end, isn’t there?

The reason Dallas Buyers Club got as much press as it did is specifically because of the performances of both Matthew McConaughey and Jared Leto. There’s a reason for that—both are stellar. Leto looks nothing like himself in most of the film. One of the great stories of the making of this film is that it looks as good as it does in terms of turning these two men (and others) into AIDS patients on a hair and makeup budget of a mere $250 (it more than deserved this Oscar, too).

Beyond those two performances, though, Dallas Buyers Club is a good, if sometimes only serviceable and rarely great film. Oh, the performances are good all the way through, but aside from McConaughey and Leto, they aren’t anything to get one’s pants in a bunch over. The story itself, ripped from 30-year-old headlines is certainly important and worth telling, but it goes through its motions in a way with which anyone who watches films will be familiar. We get the little guy fighting against the government and against society’s perception of him. We get the moral outrage when the government clamps down on something that’s helping people. We’ve all been here before, and so it’s no surprise where we’re going to end up.

More or less, Dallas Buyers Club exists as a vehicle to prove that under his teen idol good looks and past catalog of ridiculous romantic comedies, Matthew McConaughey has some talent to fall back on. He’s capable of producing an exceptional performance and truly committing to it. I’ve always tended to like Jared Leto, so it’s nice to see him pulling out a great performance and being rewarded for it as well.

As much as this may feel disappointing to say, Dallas Buyers Club may be a one-and-done film for me. I’ve seen five of the most recent crop of Best Picture nominees, and Dallas Buyers Club moves comfortably into the middle spot. That said, I don’t currently have an objection to the film’s three Oscars, all of which seem well-earned.

Why to watch Dallas Buyers Club: McConaughey and Leto.
Why not to watch: There’s only one way this can end.