I know that in general I’m writing for a movie geek crowd. It’s sad in that respect that Paul Muni is so little known and little remembered. This is a guy who was nominated for five Best Actor Oscars. Five, with one win. For reference the fact that Muni is so little remembered now would be like other five-time nominees being forgotten. Guys like Gary Cooper, Daniel Day-Lewis, Robert De Niro, Tom Hanks, Al Pacino, and James Stewart. So why don’t we remember him? 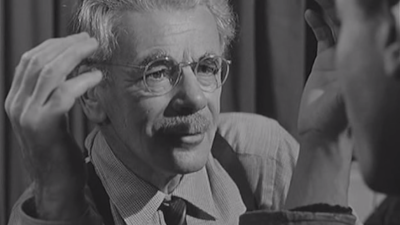 The Last Angry Man was Muni’s fifth and final official Oscar nomination (he was an unofficial write-in in 1935) as well as his final film appearance. A great deal of Muni’s career was, more or less, turning character parts into leading roles, and his work here is no different. Dr. Sam Abelman (Muni) is a Russian immigrant and a doctor who lives in a downscale Brooklyn neighborhood. He treats patients, most of whom can’t pay and many of whom are ungrateful, out of his home. As the film opens, a group of young thugs drops off an unconscious woman (played by no less a luminary than Cicely Tyson) on his doorstep and drive away.

As it happens, Abelman’s young nephew Myron (Joby Baker) is trying to make a name for himself at a local paper. He writes up the story of the event and it makes page five. As it happens, a local television executive named Woody Thrasher (David Wayne) is looking for a new angle on a human interest story he is pitching to a pharmaceutical company sponsor. Desperate to save the show, he comes across the story in the paper and decides that Sam Abelman is just the sort of person he needs to make his show work. And so Thrasher heads out to Brooklyn to see if he can convince Abelman to be featured on the program.

The issue for Thrasher, though, is that Sam Abelman is the sort of man who has opinions and isn’t afraid to voice them. He takes no handouts, allows no funny business, and isn’t afraid to call anyone he things isn’t honest a “galoot.” Despite this, Abelman does anything he can for his patients. He’s not interested in the show at all, but Thrasher is very interested when he sees him handle a young tough named Josh Quincy (Billy Dee Williams in his first screen role). Thrasher works on Sam’s wife Sarah (Nancy R. Pollock) and his best friend, Dr. Max Vogel (Luther Adler). Eventually, he convinces Sam to do the show, and also arranges for him to be given a new house from the show’s sponsor as a reward for his service.

But of course things can’t be this simple. During rehearsals for the show, Sam reveals a number of attitudes and opinions that aren’t necessarily favorable to the sponsor’s business, other doctors, or the medical profession. Despite this, the show goes on as planned, except for the continuing problem of Josh Quincy. Josh has a number of spells and fits, and it is evident that he may have a brain tumor. His deteriorating health throws a wrench in the works of the show and Sam’s participation, as does his discovery of the gift of the new home, which he wants nothing to do with.

In truth, The Last Angry Man isn’t much more than a baby step above a typical movie of the week. It’s a potentially heartstring-tugging story and tons of pathos and a tortured man troubled by demons that he can’t control and by people who can’t truly appreciate him. This is nothing you haven’t seen on that front. It is fortunately rescued by two simple things. The first is the performance of Paul Muni, who is absolutely brilliant. Muni is in many ways the precursor for someone like Daniel Day-Lewis. He played each role completely differently and took on new mannerisms, speech patterns and more for every role he played. It’s incredibly difficult to figure this man was the same guy from I am a Fugitive from a Chain Gang or the original Scarface. He is absolutely transformed into this poor old Jewish doctor living in a Brooklyn slum.

The other bright spot is a really solid performance from David Wayne as Woody Thrasher. I’m not familiar with Wayne. He’s a non-descript looking man, the sort of background actor not too difficult to spot and almost impossible to remember in films of this era. But here, Wayne is capable of turning a standard character—the producer who actually has a heart instead of a cash register—into someone easy to sympathize with and root for. It’s also nice to see Betsy Palmer (more commonly known for being the mother of Jason Voorhees) as Thrasher’s wife.

So it’s sad that these two great performances seem to have been wasted on a film that is so easily forgettable and so limited in what it tries to do. It feels very much like a stage play made for television and sadly leaves about as much impact. But it’s worth hunting down to see Muni’s last great role. See this and see some of his earlier films. It’s amazing what the man was capable of doing when the cameras were rolling.

Why to watch The Last Angry Man: Because you should know who Paul Muni was.
Why not to watch: It’s really hard to find and it's not really worth it when you do.