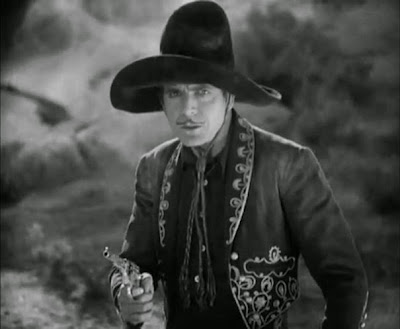 I’m often of two minds when I watch a film from the very early days of Oscar. On the one hand, the majority of the films I’ve seen from this era are, at the very least, incredibly dated. Most of them are pretty wretched from a modern perspective in part because people were just figuring out how to do sound in the movies. I dread them a little bit because of this. On the other hand, if I’m going to see all of them, or at least as many as I can, knocking them out on a regular basis is important so I don’t end up with a bunch of them at the end. So when In Old Arizona showed up today, I was both pleased to knock out a film from the second Oscar ceremony, I was nervous about it as well.

I had every reason to be nervous about it. Aside from our lead actor, this is almost a farce with how overacted it is by every other character. What we have here is a basic love triangle complicated by the fact that one of the men is a wanted criminal and the other is a military officer charged with capturing said criminal. Stick it in the West at some vague time that could be after the Civil War or vaguely in the film’s present and we have a movie. Sorta.

The Cisco Kid (Warner Baxter) is a bandit with a $5,000 reward on his head. That said, he’s actually a pretty polite bandit. When we see him rob a stagecoach, for instance, he refuses to rob the passengers, but takes only the Wells Fargo strongbox. When he discovers later that a barber in a nearby town lost $87 he’d sent by Wells Fargo due to the robbery, he repays it in full. All Cisco really wants is to get back to his girl, Tonia Maria (Dorothy Burgess).

After his robbery, Cisco spends some time in town. It is here that he meets Sergeant Mickey Dunn (Edmund Lowe), a big, blustery jackass from New York. Dunn is charged with capturing the Cisco Kid alive or dead. However, Dunn doesn’t know what his new quarry looks like, so Cisco is able to play it off and have a little fun at the sergeant’s expense.

When we’re introduced to Tonia, we learn quickly that she’s not much for faithfulness. As Cisco rides up, she’s shooing another man off the porch. Cisco is dedicated to her, but she’s quite a bit more changeable. He realizes that Dunn is looking for him, so he sends Tonia into town to meet the Sergeant in a saloon. Eventually, Cisco rides off and Sergeant Dunn, initially attracted to Tonia, rides up looking for his new rival. Rather than asking about the whereabouts of the Cisco Kid, he instead basically moves in and more or less acquires Tonia as his new girlfriend.

Tonia eventually reacts when she discovers that Dunn is hunting Cisco for the reward. When he tells her that capturing the bandit will net him a promotion and he’ll give her the full reward money, she’s completely on board with having her former lover killed and running off with Dunn. Cisco overhears this conversation, realizes that Tonia doesn’t come close to loving him the way he loves her, and this sets up the final act.

There are a few other actors here, but the three mentioned so far make up the bulk of the screen time. Of all of them, only Warner Baxter is worth watching. This is definitely a case of whitewash casting. Warner Baxter is about as Mexican as I am. The same appears to be true for Dorothy Burgess, who hams up her accent to 11. As for Edmund Lowe, he may well have been a fine actor at some point in his career but this was not that point. This is a character who plays on his own reputation and making up stories when he thinks he can get away with it. He’s a blowhard and it’s really easy to write him off.

But Warner Baxter, for all his cheesy Mexican accent, is really entertaining to watch here. There’s something far more natural about his performance. Cisco is really easy to root for; the discovery of Tonia Maria’s unfaithfulness is a genuine moment.

That’s neither here nor there. Baxter is the only reason to watch this. Well, that and how the conclusion works out although it’s a long way to go for a moment of perfect revenge. Frankly, it’s too long, even though the film isn’t.

Why to watch In Old Arizona: The ending is surprisingly hardcore.
Why not to watch: It kinda sucks.