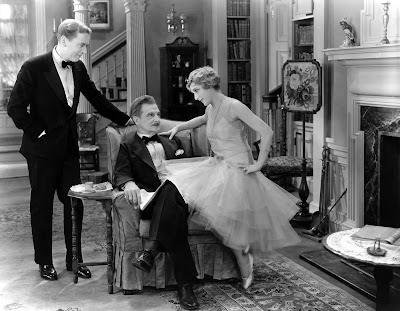 When I first started working specifically on Oscar films, it seemed like such a good idea. For the most part, it has been a pretty good idea. And then I come across something like Coquette, and I wonder what the hell I was thinking about. Sitting through Coquette was like a root canal without painkillers. And to think, Mary Pickford won a statue for this thing.

So here’s our paper-thin plot. Norma Besant (Mary Pickford) is the sort of girl who won’t commit to a guy but instead revels in collecting multiple bouquets of flowers every day. This is despite the fact that she has been almost constantly pursued by Stanley (Matt Moore), an allegedly young man (the actor was in his 40s) who has her father’s approval. That father (John St. Polis) is the local doctor and wants Norma to marry someone with some potential. Sadly for him, Norma has decided that she’s got a thing for Michael Jeffery (Johnny Mack Brown), who her dad thinks of as a ne’er-do-well.

Can you guess where this is going? Norma falls for Michael, Michael falls for Norma, and dad has a conniption. Dad confronts Michael over the fact that Michael had a fight in town and claimed that he would marry Norma. Dad forces Michael to never see his daughter again and Michael leaves, vowing to make something of himself and leaving Norma distraught but still able to string Stanley along so she can go to dances and get flowers. And then, when Michael finally returns, the shit hits the fan and the confrontation between Michael and dad gets violent, and then positively murderous in a literal sense.

I’m going to have a hard time getting to my typical 700-word minimum here, because there’s not a lot to talk about with this one. It’s dead short, for starters, not even stretching to the 80-minute mark. But it feels like a full-length movie because great chunks of it are almost physically painful to watch, and not in any good way. Coquette is wretchedly acted from start to finish. Mary Pickford is at least decent in places; she’s pretty good at the end, for instance, byt at the beginning of the movie, her performance is incredibly affected and annoying. We’re not told specifically (that I remember) where this takes place. It’s a good bet based on accents that we’re in the South, and that is confirmed by the fact that Norma is a stereotypical Southern belle.

What I mean by that is that she is a woman who will happily go to incredible lengths to get a man to notice her and make a fuss over her, but attempt to play it off as innocence and naivety. More than that, as per the time, we’re supposed to find this charming and be enamored of her. While Pickford’s character is annoying, particularly in the early part of the film, she’s the best thing here. One wag on Letterboxd commented that the reason Pickford won the Oscar may simply be that she could act in a cast of people who struggled to say their lines at all. While that might overstate things a little, it’s a pretty accurate description of the film.

Seriously, this film has nothing really going for it. The people are a bunch of dimwits, especially Norma’s brother (William Janney), who is a typical entitled kid. Worse, no one but Pickford can deliver a line with anything like human emotion. Much of the film comes off like a high school drama, except that even high school plays sometimes have acting that isn’t physically painful.

This is a film to avoid unless, like me, you’re pursuing a list that includes the film. Had I not needed to get through the film for one of the Oscar lists, I’m not convinced I would have gone more than 15 minutes into it before turning it off and forgetting about it completely. Mary Pickford may have been one of the important actresses of her time, but in the light of this film, you’d be hard pressed to tell why.

Why to watch Coquette: You’re a completist.
Why not to watch: It’s appallingly crappy.