Smoke 'Em if You've Got 'Em

Film: The Insider
Format: DVD from NetFlix on rockin’ flatscreen. 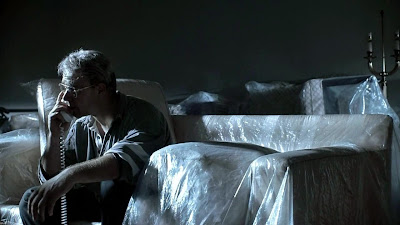 It’s interesting to see the moment an actor’s career makes a change. For Russell Crowe, one could argue pretty successfully that that moment came in 1997 with L.A. Confidential. For my money, though, you need to go a couple of years further into the future and his role in The Insider. There was always a touch of dirt on his characters before this role, but here he plays a man who puts his life, his family, his career, and everything else on the line for principle. I think it’s a stronger argument to suggest that Hollywood started taking him seriously as an actor rather than just a leading man who sells tickets when he finally took a role that wasn’t playing an inherently sexy character.

And strangely, the whole time I watched this film it felt like a Ron Howard film in everything but the soundtrack. I’m not sure why I had to constantly remind myself that this was a film directed by Michael Mann, whom I typically love. I have no reason for this—it’s just the way it is.

Anyway, The Insider is a story of Big Tobacco and the man, Jeffrey Wigand (Crowe) who finally blew the whistle on their practices and their manipulation of their product to addict more and more people. A brief backstory includes the fact that the CEOs of seven major tobacco companies testified before a congressional hearing that nicotine was not addictive despite knowing that it was and producing a product designed not only to deliver nicotine to the user, but to deliver as much nicotine as possible to the user. As the film opens, Wigand is seen leaving his office after being fired. As the film progresses, we learn that he was fired over his objection to the inclusion of an additive in cigarettes that assisted in the quick absorption of nicotine and was itself carcinogenic.

All of this happens virtually simultaneously with an investigation of the tobacco industry by television news magazine 60 Minutes. One of the producers of the show, Lowell Bergman (Al Pacino), through his contacts, eventually contacts Wigand to decipher a document from the tobacco industry concerning people inadvertently starting fires with cigarettes. Wigand takes some convincing, since his departure from Brown & Williamson Tobacco came with a non-disclosure and a settlement. Eventually, though, he does agree to go through the documents and hints that he knows a great deal more.

Of course, there’s a great deal of movement from the tobacco company itself. Eventually, Mike Wallace (Christopher Plummer) gets involved in the story, Wigand agrees to go on the record, provided the details of the agreement he signed can be worked out, and Wigand and his family start receiving death threats, subpoenas, and considerably less than expected help from the FBI, since the field office near Wigand has a number of agents with ties to the tobacco industry. Further, since Wigand’s testimony could cause serious damage to the industry, CBS finds itself under threat of lawsuit from Brown and Williamson, causing them to cave under pressure and hold the story back.

This is not a fun movie, but it is a compelling one in its own way. It’s also too long for the story it tells. This is, of course, an important story to tell, but the more than 150-minute length is at least 20 minutes too long. Perhaps in 30 or 40 years, the long sequence at the start establishing Mike Wallace as a veteran newscaster interviewing the head of Hezbollah will be important to those future audiences. For the rest of us who live now, Mike Wallace doesn’t need that much of an introduction. This is particularly true in the sense that The Insider portrays a moment in time a mere couple of years removed from the events it portrays.

I said at the top that this appears to very much be the coming out party for Russell Crowe as a serious actor, and it is Crowe who received the Best Actor nomination. I won’t say he didn’t deserve it, but I could just as easily see a nomination for Pacino, and a supporting nomination for Plummer as Mike Wallace. Pacino does get one of his trademark rants in, but it is generally a measured performance. Plummer portrays Wallace as both a man with his own worries and concerns and, more than once, as a stone cold badass. That said, I understand Crowe’s nomination. He plays Jeffrey Wigand as a man deeply torn by his convictions and the realities of the world he lives in. It’s a sympathetic portrayal from a guy not really known for them.

The Insider is worth a watch. There are certainly elements of thriller here, although it feels toned down from what we normally expect from a film that comes with that label. The reason is simply—even though the notes at the end of the film tell us that certain events were changed to heighten the tension and drama, this is a film that plays itself very much as a part of the real world. There’s nothing extreme here, which makes it all the more believable, and for that matter, all the more frightening.

I should mention also that in addition to the three actors I’ve named, the cast is pretty solidly loaded, with a lot of good performances from known and respected actors, many of whom are in very small roles.

Why to watch The Insider: It’s a story that should be seen no matter what 60 Minutes tells you.
Why not to watch: Sometimes knowing how the world works doesn’t make things better.