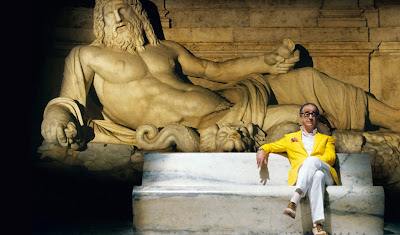 I wasn’t more than 20 minutes in La Grande Bellezza (The Great Beauty), winner of the most recent Best Foreign Language Feature Oscar, when I felt as if I had very much seen this film before. I have. The last time I saw this, it was called La Dolce Vita and was directed by Federico Fellini. The parallels between this film and that one are unmistakable and absolutely intentional. This is not the first time director Paolo Sorrentino has been compared with Fellini. My research after the fact indicates that I am not alone in this impression.

This is the story of Jep Gambardella (Tony Servillo), who was an acclaimed author in his youth. He wrote a single book for which he received a great deal of fame and at least one significant award. Rather than following that success up with a second book, though, he took to a life of high life partying in Rome. For income, he writes about art, artists, and famous people for a newspaper. But mostly, he goes to wild parties. As the film opens, we see his 65th birthday party, which involves a number of the beautiful people of Italy, dancing, music, drinking, and presumably a great deal of sex.

And then something happens that changes Jep’s entire worldview. The husband of one of his old girlfriends suddenly appears and tells him that his wife has died, and that she loved Jep her entire life, never really getting over him despite not having seen him for 35 years. This causes a profound shift in Jep’s thinking, causing him to wonder what the purpose of his life has been and what the purpose of life in general has been. And so we follow him for several days as he goes through the mental and emotional issues centered on dealing with answering those questions, at least for himself.

One of the more significant events is the entrance of Ramona (Sabrina Farilli) into his life. Ramona is the middle-aged daughter of an old friend who works as the manager of a strip club. Ramona, creepily enough, is one of the dancers there. The friend wants her out of that life and looks to Jep to essentially find her a wealthy husband because he is so well connected with the movers and shakers of Rome. Instead, she and Jep begin a relationship, tentatively at first, and then somewhat more passionately. The sex, as it turns out, isn’t that great, but the closeness and companionship is. Suddenly, there is a moment where it appears that Ramona has died, although after a few seconds she moves and talks. And yet after this scene, people are consoling Ramona’s father and asking Jep who will take care of him now. So did she die? Did she leave? Was the scene after her evident death a short fantasy? It’s never really explained.

And really, this is the entire film. In many ways, if you’ve seen La Dolce Vita, you’ve seen this film. Everyone in this film, or virtually everyone outside of Jep himself is completely vacuous, and all of them are vacuous to the point that they see nothing wrong with it. Jep is equally vacuous, but he’s aware of it. At one point, even a cardinal, rather than offering Jep the advice about his spiritual crisis that he desperately wants and needs is content instead to offer duck recipes and concern himself with frivolities. Those who we assume may have something of substance are as vacant as the rest of us. This is no mistake. In fact, this is absolutely the point.

In fact, near the end of the film, an ancient nun arrives in Rome. For all intents and purposes, she is Mother Theresa. What do the dozens of people who make a pilgrimage to see her do? Take selfies with her. She, of anyone, has real gravitas, as does Jep’s friend Romano (Carlo Verdone), who leaves Rome, having decided that there is nothing in the city for him and no one other than Jep worth saying goodbye to.

So what does it all mean? La Grande Bellezza is a very long way of telling us that life has the meaning that we give it. We get so caught up in little things—little pleasures, irrelevant things, vacant activities—that we lose sight of what is truly important in an otherwise meaningless world. At some level, our hunt for meaning is purely natural. But for many of us, this quest for meaning is ignored instead by empty pleasures we use to distract ourselves from a world without real meaning. Jep says as much in the last few minutes.

So is it good? Yeah, it is. La Dolce Vita is one of the Fellini films I actually liked, which is noteworthy in and of itself. La Grande Bellezza is an excellent updating of the basic ideas and themes of Fellini’s original film. Have we become more vacant, stupid, self-serving, and ignorant than we were 50 or so years ago? Probably. So we probably need films like this now and then to slap us across our entitlement.

I don’t drop a lot of quotes here, but this film calls to mind one of my favorites. Comedian Louis C.K. once said, “’I’m bored’ is a useless thing to say. I mean, you live in a great, big, vast world that you’ve seen none percent of. Even the inside of your own mind is endless; it goes on forever, inwardly. Do you understand? The fact that you’re alive is amazing, so you don’t get to say, ‘I’m bored.’” Someone needs to tell Jep’s friends.

Why to watch La Grande Bellezza: It’s possible to update a classic and do it well.
Why not to watch: This is probably ground you’ve covered before.