They're Guarding Their Box Office Receipts 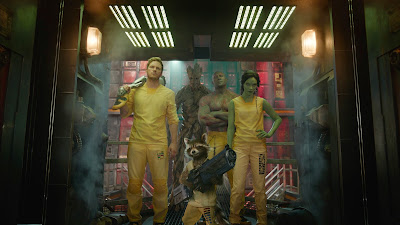 When I first saw the trailer for Guardians of the Galaxy, I thought pretty much what everyone else did: this is going to be the best superhero movie ever made or the biggest piece of garbage since Battlefield Earth. In truth, it’s neither, and fortunately for the movie lover and kid in all of us, it comes a hell of a lot closer to the first option than the second one. A hell of a lot closer. I don’t go to the theater often, but this one was absolutely worth the price of admission. (And more, actually. You’ve gotta love $5 matinees.)

Despite the fact that everyone I know has been singing the praises of this film, I have to say that for the first 20 minutes, I was pretty worried. There’s a boatload of back story here, and if you’re not a comic book fan (and I am not), it’s pretty opaque. Assuming that you know even less than I do and that you can’t keep your Skrulls straight from your Kree, expect the exposition portion of the film to be extremely confusing.

Essentially, you have a presumably human thief named Peter Quill (Chris Pratt) who calls himself Star Lord. He shows up on an abandoned planet and steals a metallic orb and is suddenly surrounded by goons. See, there’s an alien guy with a massive grudge against another group of aliens who wants the orb. This guy, called Ronan (Lee Pace) sends one of his minions, a female assassin named Gamora (Zoe Saldana) to get the orb. And, as it happens, a pair of bounty hunters consisting of a genetically engineered raccoon named Rocket (voiced by Bradley Cooper) and an animated tree named Groot (voiced by Vin Diesel) spot that there’s a bounty on Quill. The bounty comes specifically because Quill has double-crossed his old boss Yondu Udonta (Michael Rooker), who seriously (and I’m going to go very obscure here) looks like he belongs in 2000 A.D.’s Rogue Trooper.

Confused yet? Don’t worry, because it’s really not that hard to follow once all of the pieces are in place. That final piece in terms of the title characters is Drax (Dave Bautista), who the other four meet while in prison. Of course there is a massive prison break and the five disparate personalities start out hating each other and come to trust each other slowly but surely. You know that going in, after all. The whole point of the movie is to get these five people to end up kicking ass like the Avengers.

The real question for a film like this has nothing to do with believability. It’s all pretty ridiculous, and it’s kind of supposed to be no matter how straight our principle cast plays it. The real question is how well the whole thing works. And the truth is the whole thing works pretty damn well. Sure, there are moments when you can tell that Rocket is CGI. Same with Groot. Yes, there are plenty of places that completely blow away the concept of believability, but that doesn’t matter a bit. We’re dealing with objects of universe-shaking power, alien races, and walking talking trees. It’s pure fantasy and escapism in that respect, and in terms of that, it delivers as well as anything of a similar genre.

One of the current memes on the internet is that DC is complaining that Wonder Woman is too complicated and difficult a property to get a film greenlighted, while Marvel has just produced a movie that features an anthropomorphic raccoon firing a gun while standing on a walking tree creature. There’s some truth to that, but the biggest risk here, at least in terms of Marvel’s properties, may well have been the choice of director. Take a look at James Gunn’s directorial filmography—this is not a guy with a string of blockbuster films to his credit. He’s also a guy who got his start working for Troma, which is not the sort of pedigree one thinks of for a $170 million movie. I like Gunn. He’s got the right sort of irreverence in general and reverence for the source material that was necessary for something like Guardians of the Galaxy. He plays for laughs when he can and plays it straight when he needs to. If nothing else, he should be credited for keeping this whole thing from spinning completely out of control.

That said, there are moments when I as the moviegoer think about the actors in a film like this. On the surface, the premise of this film, like a lot of science fiction, horror, and fantasy, is completely stupid. And there’s a moment when John C. Reilly is talking to Glenn Close about an alien invasion of their home planet. I mean, this is one of the better loved actors working today talking to a six-time Oscar nominee about an alien spacecraft containing a magic rock. Is there a moment where they both just think, “What the hell am I doing?”

Anyway, the film gets the action right in general, although a couple of the fight scenes suffer from my usual complaint—too many fast cuts and too many scenes where the action is in too close to see what is happening. However, it’s substantially less of a problem here than it is in many another film. Where the film truly works is in the characters. All of these characters are easy to like, at least in terms of our heroes. Quill is a bastard, but he’s a funny bastard. Gamora, in addition to being a badass, has a sense of honor and dignity. Drax’s motivations are obvious and sympathetic. Rocket gets the best lines, which makes him even funnier than Quill. And Groot is an innocent who also happens to be capable of putting a beatdown on the bad guys. These are lovable characters and characters easy to respect, which has very much been the biggest pleasant surprise in much of the Marvel movie resurgence.

Best of all? It genuinely feels like in those moments before the credits roll that Gunn is paying homage to Joss Whedon. I can’t be the only person who got just a hint of Firefly/Serenity at the end, can I?

In a perfect world, we’ll eventually get a film that has both the Avengers and the Guardians in it. When that happens, Marvel will then possess all of the money in the world and the sun will go supernova from awesome.

Why to watch Guardians of the Galaxy: It’s exactly as much fun as you hoped it would be.
Why not to watch: You killed your inner child years ago.

Posted by SJHoneywell at 2:42 PM