The Contenders:
Back to the Future
Brazil
The Official Story
The Purple Rose of Cairo
Witness (winner) 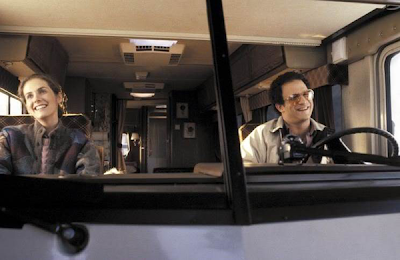 It’s probably too much to suggest that a film like The Goonies would be nominated, but I give it points simply for conceiving of the Truffle Shuffle. As far as I can tell, Idi I Smotri was an original screenplay, and if it was, it should have been included, although that film seems to have been ignored by Oscar completely. Fright Night is fun, but probably didn’t deserve a shot at the statue. The same is true for Ladyhawke. There are a few I think worthy of mention, though. Tampopo, first and foremost, deserves some love here. In addition to it, I would argue for both Runaway Train and Lost in America.

5: With The Official Story, we’re given a film that, in a lot of other contexts, would be little more than a movie of the week. It’s the situation that actually makes the film work and makes it feel far more important than it would have otherwise. And the screenplay here is good, but I can’t really call it exceptional. It’s the history that’s exceptional, the story behind the story rather than the screenplay of the film. There are three or four movies I’d rather see nominated than this one. 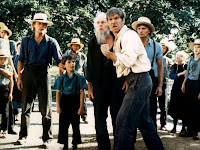 4: It feels like it’s been some time since I’ve put the actual winner in fourth place, but that’s where I’m putting Witness. This is a film that’s only real point of interest is that a number of the characters are Amish. It’s otherwise very much a product of its genre. There are no real surprises here at all, and that following along with genre rules seems like a failure of screenplay, not a reason to endorse it. Good, but there’s no real reason it should have been nominated above Lost in America, Tampopo, or Runaway Train. Or hell, even Ladyhawke.

3: The most difficult choice for this week was where my choices would go. Would I include The Purple Rose of Cairo as a potential winner or as one that really shouldn’t be considered? Ultimately, I have to give credit to Woody Allen. This is a much darker film than people may have been used to from Allen. At the same time, it’s a love letter to the movies of the ‘30s and ‘40s. It’s a beautiful story, tragic and sad, and nearly perfectly written. Of course, writing has always been Allen’s strong suit, so it would be hard for me not to put him in the “I’m okay with this winning” group.

2: I though pretty hard about where I’d put Brazil. I finally decided to put it second, but with an asterisk. That asterisk is this—I think it’s the best written film of the year, but I base that specifically on the director’s cut of the film and not the ending released in theaters with the cobbled (and frankly stupid) happy ending. Gilliam’s complete vision is the best-written film of 1985 in my opinion, but I’m not sure which version was nominated, and my suspicion is that we’re dealing with the theatrical release. And the problem there is that it punks the ending. A film with a punked ending doesn’t deserve to win.

1: And so, of the nominated films as they appeared in the theater, I hand the Oscar to Back to the Future. Comedies are always tricky when it comes to screenplay because comedies don’t always age well. There are a lot of jokes in Back to the Future that don’t work for a modern audience, absolutely true. But the story still works. The characters still work. The acting performances still work. I know there are plot problems; there always are with time travel. So what? This is a marvelously written film that combines wit, comedy, heart, and, well, pretty much everything else I want in a movie in one place. And with Brazil getting the asterisk, this one gets the statue from me.

Posted by SJHoneywell at 1:58 PM

Email ThisBlogThis!Share to TwitterShare to FacebookShare to Pinterest
Labels: 1985, Back to the Future, Best Original Screenplay, Brazil, Oscar Got It Wrong, The Official Story, The Purple Rose of Cairo, Witness