What's with the Dog? 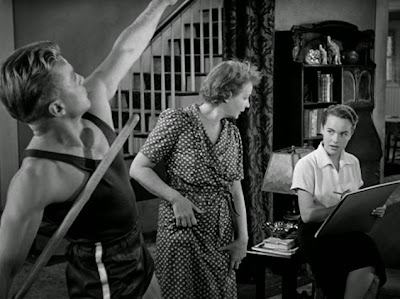 Strap in folks, because this one is going to hurt. For whatever reason, the DVD I got from NetFlix yesterday wouldn’t play in my laptop, so I was stuck with internet videos if I wanted to get something watched. And for whatever reason, I selected Come Back, Little Sheba. Honestly, I’m sure my rationale was that I’m the furthest behind on Best Actress nominees, mostly because they are underrepresented on the 1001 Movies list. I’ve got it as a minor goal to get to 50% done by the end of the year, so I’ve been hitting them pretty hard of late, and the Best Actress nomination (and, in fact, winner) is the only reason that film is on my radar.

Continuing my current inadvertent theme, this is another film that was originally based on a stage play, and it has all of the earmarks of that despite having a couple of scenes away from the main set. It’s also a film that is heavy on drama and meaning without being of anything earth-shatteringly important. No, this is a domestic drama by definition, and it doesn’t really go that far outside the home.

Lola (Shirley Booth) and Doc Delany (Burt Lancaster) are a middle-aged couple who have no children. We discover eventually why they don’t have children, but that doesn’t matter at the start. Looking for a little extra income, Lola decides to rent out their spare room to a local college student. Marie Buckholder (Terry Moore) is an art student who is more interested renting the downstairs parlor rather than the upstairs bedroom. Wanting the extra income, the Delanys accept and Marie moves in. Doc experiences some odd emotions based on this. He’s evidently somewhat attracted to the young college student but also feels paternal toward her. We also learn that Doc is a recovering alcoholic, having just reached is one-year anniversary in AA.

Here’s the issue we’re dealing with. Marie is hoping to marry a young man named Bruce (Walter Kelly). However, Bruce doesn’t live close and Marie has been canoodling with a college track star named Turk (Richard Jaeckel). Ostensibly, Marie’s association with Turk is for her to draw him for a poster for one of her classes; it’s soon evident that Turk has other things in mind. This is an issue for Doc, because we soon learn that Doc is only married to Lola because he got her pregnant. The baby died and Lola was unable to have children after. Since that time, Doc lost himself in booze until recently. The situation with Marie—her unfaithfulness to Bruce and his own unresolved lost dreams (the pregnancy forced him out of medical school) are pushing him back toward drinking.

What doesn’t seem to fit in all of this is the name. Sheba, as it turns out, is a dog that Lola and Doc used to own and that evidently ran away. Much of Lola’s speech is about Lola running away and being gone and desperately wanting the dog back. Naturally, this works symbolically within the context of the story. Sheba, in many ways, becomes the lost youth of Lola and Doc—something that has gone away from them and isn’t coming back. How they deal with this by the end, of course, is the whole point of the story.

Burt Lancaster is as good in this as he is in pretty much everything he ever did. He’s Burt Lancaster—he didn’t turn in a lot of substandard performances. Shirley Booth is the real star here, and her performance is the one to watch. Lola, as the story progresses, reveals herself to be a woman who is desperately lonely and trying to compensate. She talks constantly about anything and everything, a flood of inane conversation as a way to prevent herself from realizing how alone she actually is. Lola is annoying, but she’s supposed to be. She frequently calls Doc “Daddy,” which becomes a sort of creepy litany, almost a way to claim a youth she no longer has.

What doesn’t work here is the age differences. Shirley Booth was a good 15 years older than Burt Lancaster, and it shows here. Lancaster is given an old man’s haircut, but we’re led to believe that the couple (based on the idea of them being together for about 20 years) is in their early to mid-40s. Lancaster was. Booth, though, was in her mid-50s, and she looks every year of it.

This is not a happy film, and I’m not sure it’s a great one. Booth’s performance is worth seeing though, at least for those with the patience to survive her constant commentary on everything that happens around her. After all, that’s the point.

Why to watch Come Back, Little Sheba: Shirley Booth.
Why not to watch: It’s depressing, even when it’s trying to be uplifting