So the Predicate Was Violets? 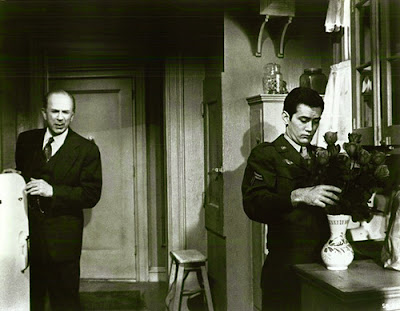 Well, this should be fun. Looking for something to watch today, I decided to hit the DVR and pretty much at random selected The Subject was Roses. I knew nothing going in, and what do you know? It’s another movie based on a stage play. I’m getting to the point where I’m starting to think that 90% of the movies ever made started out as theatrical dramas. Anyway, I have no complaints about the cast here. While a few other people show up, our principles are Patricia Neal, Jack Albertson, and Martin Sheen.

We’re in New York just after the end of World War II. Timothy “Timmy” Cleary (Martin Sheen) has just returned from the war, and as the film opens, it is the day after Timmy’s welcome home party. His parents, John (Jack Albertson) and Nettie (Patricia Neal) are arguing, pretty much as usual. They argue about Timmy, about too much drinking, and pretty much anything else. It soon becomes evident that this is a normal state of affairs.

And really, this is the bulk of the movie. It is rapidly evident that Tim is much more at home with his mother than with his father, but that his father is doing everything he can to win his son over to his side. And that is the relationship matrix that we will spend the bulk of the film immersed in. Each parent essentially wants to gang up with Tim against the other. Both complain about Tim’s excessive drinking. Tim and his father spend a day together and when they come home, Tim has bought roses for his mother, but insists that they tell her they come from John. After another fight, the vase gets smashed and John admits that the roses were actually from Tim.

The next morning, Tim and his mother fight, mostly about John and how she consistently belittles him. My guess is that the term “passive-aggressive” wasn’t widely in circulation when the play was written, but that is what she is. Regardless, the fight is serious enough that Nettie leaves the house with a purse filled with change she has saved up for years. Essentially she vanishes. Naturally, this leads to more fighting between Tim and John until Nettie returns home and offers a variety of stories about where she has been and what she has done. All of this leads up to our third morning and how the family will move forward from there.

The Subject was Roses is an angry film without being too aggressively so. But this is not a film where anything good really happens to anybody until the end, and even there there’s a question how good any of it really is. A bigger question is who is at the center of the film. In truth, all three of the characters change by the end, and I’m not sure which of them changes the most.

Depending on who you ask, the performances of Martin Sheen and Jack Albertson are either straight theatrical overblown pomp or as good as they come. I haven’t decided for myself. There are moments when I think there performances are fantastic. There are others, though, where the stage roots of this film are blatantly obvious, and our two male stars are playing to the back seats. The consensus is that Patricia Neal is the emotional heart of this film, though, and in that I am in complete agreement. I can’t call her the warm emotional center, because in truth, she’s more like the film’s cold heart. Neal was an accomplished actress, but it would be difficult to think of a film where she was better.

I don’t think this is a film that I would recommend. Neal’s performance genuinely is as good as they come, but the film itself, while well written, is unpleasant. This seems often to be the case for me with domestic dramas. I don’t generally want to relive my worst Thanksgiving experiences complete with drunk relatives, and that is more or less what The Subject was Roses is, over and over. It’s your worst family memories condensed into less than two hours. Not many performances are wroth that.

By the way, I'm sorry for the black-and-white picture. I couldn't find a good color picture for the life of me.

Why to watch The Subject was Roses: Mostly for Patricia Neal.
Why not to watch: It’s like a really bad family Thanksgiving.