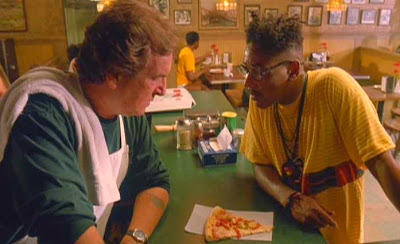 This year was an interesting one in film, and the Academy didn’t appear to stick much with the high-grossing films, at least for Best Director. Only Dead Poets Society and Born on the Fourth of July got director nominations and made the top 10 for box office. Within that top 10, Tim Burton’s Batman would be an interesting choice, as would the third (and in many ways final) film in the Indiana Jones series (Spielberg). It’s probably a long shot to suggest The Little Mermaid (Ron Clements and John Musker), at least in terms of direction. In my opinion, the finest piece of direction of the year was Kieslowski’s The Decalogue, but since it was made for television, it’s not eligible. I’ll catch shit for suggesting Spike Lee for Do the Right Thing, but it’s a nomination I’ll stand by. The other two directors I might consider here are Rob Reiner for When Harry Met Sally and Phil Alden Robinson for Field of Dreams.

5: I remain generally unimpressed with Dead Poets Society as a film, but that doesn’t really speak to the direction. Admittedly, my opinion of the film almost certainly colors my opinion of what Peter Weir did on the film. As objectively as I can, though, I look at this and wonder precisely what Weir did aside from filming the story. Okay, I give him credit for managing to rein in Robin Williams for a solid performance, but did anyone walk out of the theater thinking what an excellent job had been done by Weir? I find that difficult to believe.

4: As much as I tend to like Woody Allen, I’m putting Crimes and Misdemeanors fourth. The main reason for that is that I can’t specifically think of anything Allen did as the director that makes this film exceptional. It’s a great script and an equally great cast, and the truth is that, at least for my money, the value of the film comes from those two aspects rather than the person behind the camera. Crimes and Misdemeanors might not have been a Woody Allen film with a different director, but I think it still would have been a very good, even great film with a different person behind the camera.

3: Jim Sheridan’s greatest accomplishment with My Left Foot was coaxing that staggering performance out of Daniel Day-Lewis. Or was it? At the time, it would have been easy to credit Sheridan for Day-Lewis’s brilliance. He’d only had a few major roles to this point in his career and it wasn’t until this film that he blossomed into the acting machine we’ve all come to know and love. So, in retrospect, is Sheridan responsible for Day-Lewis? Or is it more likely that Sheridan was simply the beneficiary of directing the man in the film that caused him to become one of the most acclaimed actors of his generation?

2: I’ve said before that Oliver Stone has a heavy hand as a director, and he typically does. That’s what makes Born on the Fourth of July so interesting. Perhaps it’s that he wanted to do something that was far more close to the real story of Ron Kovic. For whatever reason it happened, it happened, and Stone was able to tell the story without diving headlong into his typical symbol-heavy style. I appreciate it, and I like this more than I like a lot of Stone films for this reason. That said, as good as Stone’s work was here, he wasn’t the best director of 1989 by a very long way.

1: The right choice was and still is Kenneth Branagh for Henry V. Why? First of all, for someone unaware of Henry V’s pedigree, it wouldn’t specifically be obvious that this was based on a stage play. Second, and far more importantly, Branagh did something that many would consider virtually impossible: he made Shakespeare vibrant, exciting, and interesting for anyone, not just the English geeks and Shakespeare junkies. Compare this with the Olivier version of the same story, and there’s no comparison. Branagh wins this.

Posted by SJHoneywell at 2:26 PM

Email ThisBlogThis!Share to TwitterShare to FacebookShare to Pinterest
Labels: 1989, Best Director, Born on the Fourth of July, Crimes and Misdemeanors, Dead Poets Society, Henry V, My Left Foot, Oscar Got It Wrong