Film: The End of the Affair
Format: DVD from NetFlix on rockin’ flatscreen. 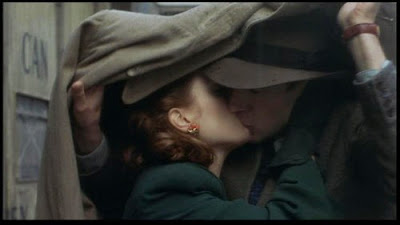 When the Oscars roll around lately, the cry goes up that poor Leonardo DiCaprio has never won a statue for himself. Where are the people complaining for Julianne Moore? She’s gone 0-for-4, but no one seems to be pissing and moaning about that. And really, is there a better un-Oscared actress currently in film? I don’t think so. One of her four nominations happened to have the bad luck of coming out the same year as Boys Don’t Cry, which meant that her performance in The End of the Affair really didn’t have a lot of hope for a win. That’s really too bad.

What I was excited about going in here is that this is based on a novel by Graham Greene, who happens to be a favorite of mine. It’s actually kind of odd that I like Greene, because he was a particularly Catholic writer and I’m a particular heretic and apostate. Nevertheless, I like Greene’s work quite a bit. I like the stories and I like the man’s skill with a phrase. More to the point, Greene often had a particularly interesting moral slant on many of his stories. Morality sites at the heart of his work, and that’s absolutely no different here.

This is actually a pretty simple film on the surface. Author Maurice Bendrix (Ralph Fiennes) encounters an old acquaintance named Henry Miles (Stephen Rea) by chance one evening. The two talk, and Henry confides in his old friend that he believes his wife Sarah (Julianne Moore) has been stepping out on him. He’s even gone so far as to get the business card of a private investigator to have her tailed. As it happens, Sarah did have an affair in the past, during the war. As it happens she had that affair with Maurice Bendrix. She also cut the affair off harshly one evening, leaving Maurice on his own, wondering why she had left him and unable to come to terms with being without her. This chance meeting suddenly thrusts Sarah back into his life.

Suspicious, and wanting to appear as a good friend, Maurice engages the detective himself. The detective assigns a man named Parkis (Ian Hart) to the case. Parkis works with his son Lance (Sam Bould), a young boy with an unfortunate facial birthmark, because Lance can get access to places as a child that Parkis cannot as an adult. Around this same time, Sarah contacts Maurice and wants to meet him.

The bulk of the film, more or less, consists of Maurice trying to discover why Sarah suddenly ended the affair. The circumstances of that parting were interesting, to say the least. The two seemed to come together during air raids, and one night, a V2 lands extremely near Maurice’s home, causing terrible damage and injuring him badly. From that moment on, Sarah walked out of his life, never meeting him or contacting him in any way, abruptly cutting off their evenings together. Her reasons are slowly revealed and finally made bare when Parkis, crashing a party at the Miles residence, walks off with her diary.

This takes us a good way through the movie, but there are plenty of shocks to be had before we get all the way to the end. I’d rather not spoil the film completely, but my issues here can’t be discussed without getting into spoiler territory. Actually, that’s a lie—I have to discuss what happens in the last half hour completely to be able to make any sense of the film as a whole. That being the case, one of my rare spoiler warnings is merited.

As it happens, Sarah has been seeing a man on her own again, but this time, the man is a priest (Jason Isaacs). See, her reason for leaving Maurice was that when the V2 hit, she found him dead in the rubble and prayed for him to come back to life, going so far as to promise God that should Maurice live, she would never see him again. When he did survive, she suddenly became a believer, and cut the affair off that instant. More to the plot, Sarah is also dying of something; we’re not really told what. This is evidently also something that comes from God, since she has broken this promise to never see Maurice again.

Okay, all well and good. But what happens with Lance Parkis seems unforgiveable. One day while she is off confessing, Lance is waiting for her and falls asleep. She discovers him when she leaves, and thinking him an orphan, gives him a coin and a kiss directly on his birthmark. By the time the film winds up, the birthmark is gone—despite her being an adulteress, evidently she also has the makings of a saint, able to cure the mildly afflicted.

So this is where it loses me. I can deal with other people’s belief systems even if I think they are funny or ridiculous, or even wholly immoral. But miracles? I don’t buy it for a second in a film like this, that has otherwise been completely rooted in the real.

It’s certainly beautifully acted all the way through and gorgeous to look at. I can’t see this as a film I would ever want to watch again.

Incidentally, there’s some nudity and sex in here. For those interested in the young, romantic lead version of Ralph Fiennes, there’s a fine shot of his bare ass (what Bill Hicks would've called "hairy, bobbin' man-ass") early on if you’re into that sort of thing. I include this only for those interested in getting a peek at Lord Voldemort’s backside and to suggest that there are chunks of this film you may not want to watch with the kiddies around.

In truth, The End of the Affair comes off as a much smaller, more intimate version of The English Patient. But because it is a smaller and much less ambitious film, it also seems somehow bereft of any grandeur it might have had. It is instead merely the chronicle of an affair that happened during World War II and the way that affects the lives of three people in post-war London. At its core, it’s a doomed romance, and not a bad one. But it goes to some unforgivable (my opinion) places, which ultimately kills what it was trying to do, at least for me.

Why to watch The End of the Affair: It’s based on a Graham Greene book, so the writing doesn’t get much better.
Why not to watch: It delves oddly into the supernatural toward the end.

Email ThisBlogThis!Share to TwitterShare to FacebookShare to Pinterest
Labels: Best Actress, drama, Neil Jordan, romance, The End of the Affair