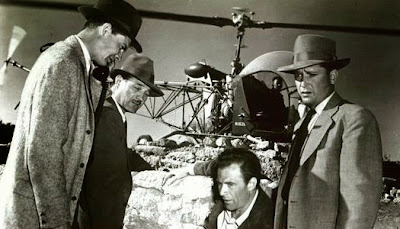 The Cold War was an easy go-to for movie plots in the 1950s especially. With the onset of the Atomic Age, there was constant concern about those darn commies getting ahead of us in the space race. From the minute the Soviets launched Sputnik, Hollywood decided that the Russians getting ahead of us in space or stealing the secrets of the bomb was exactly what was needed to get butts in theater seats. Fear, after all, is a great motivator. And more important, when you can regularly show the Americans coming out on top, you reinforce the idea of American superiority. This is exactly what The Atomic City plays on.

The plot here is dead simple. Tommy (Lee Aaker), the seven-year-old son of Dr. Frank Addison (Gene Barry) is kidnapped. Why do we care? Because Frank Addison is one of the top scientists at Los Alamos and is the man in charge of the hydrogen bomb project. The kidnapping is extremely slick—Tommy is taken during a school outing, simply disappearing. Dr. Addison and his wife Martha (Lydia Clarke) are sent a telegram basically giving them instructions not to go to the police. The kidnappers, naturally, want the latest and best equations for the h-bomb, promising that Tommy won’t survive if they don’t get them.

The Addisons keep things quiet for a day or so, at least until Frank goes into the lab on a Sunday and looks for a series of top secret equations. As it happens, Tommy’s teacher Ellen Haskell (Nancy Gates), is dating a local reporter named Russ Farley (Michael Moore). Russ isn’t really a newspaper man. He’s an undercover FBI agent. He twigs that something is going on when Frank heads to the office on a Sunday and brings in Agent Harold Mann (Milburn Stone). What follows is a game of cat and mouse as the bogus equations supplied to the kidnappers move across the country.

The biggest issue in The Atomic City is that it moves far too slowly, even for a film that has a short 85-minute running time. Things really to get going for the first hour. The final 25 minutes move at a nice clip, because it’s here that we finally believe that young Tommy is actually in danger from the spies seeking the h-bomb plans. Up to this point, Tommy’s safety is pretty much assumed. When we learn that the thugs know the formula they’ve been fed is bogus, suddenly the kid’s life is actually at risk. This leads to another cat-and-mouse game between Tommy and his captors.

I honestly wonder how much of my reaction to The Atomic City comes from the episodes of Mystery Science Theater 3000 that I’ve watched. There were a number of Cold War potboilers in the early years of that show that have a plot similar to this one in one way or another. A part of me things that may have hurt my reaction to this one because I saw so many dumb Cold War films being made fun of. On the other hand, this one is quite a bit better than films like Rocket Attack U.S.A. or Invasion U.S.A., which may mean that I’ve ended up liking The Atomic City a lot more than I should have.

In either case, there’s not really a lot to say about it. The plot has a great deal of potential and some of that potential is realized. But once seen, there’s no real reason to spend any more time with it than a single watch. I wish there were more to say about it; I know this is quite short for me, but honestly, beyond the fact that it does more with its Cold War plot than a lot of films, there’s not a lot here.

Why to watch The Atomic City: A believable Cold War plot.
Why not to watch: It’s more exciting on paper than on the screen.