The Ties that Bind (and Choke) 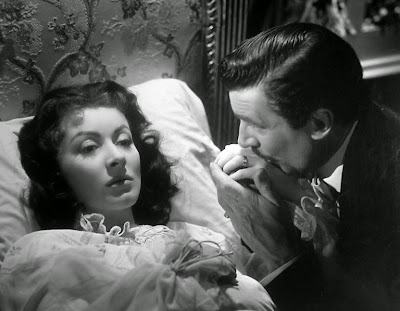 There is a particular weird little subgenre of film that attempts to encompass a person’s life. We typically start with the person at the end of his or her life and then experience the movie in a series of flashbacks. This is exactly the sort of film we get with Mrs. Parkington, which earned Greer Garson the fourth of her five consecutive Best Actress nominations. Of course, it wouldn’t be that interesting if the film were just a woman reminiscing about her life. No, we’re going to have a major conflict happening in the film’s present, and the flashbacks serve specifically as a way for us to understand the choice that Susie Parkington makes at the film’s close.

As the film opens, around Christmas, we are initially introduced to Susie Parkington’s family, and they are a miserable collection of people. None of them like each other, and it’s quickly evident that they only like their grand dame Susie Parkington because of her enormous wealth. In fact, the only decent people in the group aside from Susie are her great-granddaughter Jane (Frances Rafferty) and the new rancher husband of one of her descendants (Rod Cameron). The rest of them are exactly the stereotype of people raised on money and inherited entitlement, and every one of them is a swine, which becomes increasingly evident every time we flash back to the film’s present.

Things start moving when Jane arrives and tells her great-grandmother that she is following her man Ned Talbot (Tom Drake) away to South America. Susie insists on meeting Ned and, after a few minutes, she coaxes the reason for his sudden departure out of him. Ned works for Jane’s father (Edward Arnold), who is about to be indicted and arrested for embezzling from the family business. After a few accusations fly, the whole thing comes out: he’s guilty, and he begs Susie to rescue him and pay back the millions that he has lost through stupid investments. Since this will bankrupt the family and destroy everyone’s inheritance, they all naturally object. When the movie comes to a close, Susie gives her final decision on what is to be done.

Throughout, though, we drift back into Susie’s past. She started working at a boarding house where she eventually meets Major Augustus Parkington (Walter Pidgeon). One whirlwind romance later, and the two are married and living in New York. Gus, it turns out, is a real player in New York and one of the richest and most powerful men around. However, since he’s not old money and is a bit uncouth and rough around the edges, he is not accepted in high society. This he takes with a chip on his shoulder and sets about destroying the people he considers his enemies for wronging him. This sort of behavior eventually gets him into trouble with Susie. It’s quickly evident that while the two are very much in love with each other, Susie Parkington is not the sort of woman who will be treated like a possession.

We also need to deal with Baroness Aspasia Conti (Agnes Moorehead), who appears as sort of a surrogate shadow for both Gus and Susie. When we first meet her, she flatly declares her surprise at Gus’s marriage, since she fully expected to marry him herself. Instead, she throws herself into the job of being Susie’s friend and mentor in high society, much to Susie’s initial frustration and eventual relief.

Mrs. Parkington is an easy film to like on the surface, and several of the characters, particularly Susie Parkington and Aspasia are incredibly easy to root for. I’ve learned that I can really appreciate Greer Garson, and she’s excellent here. She plays Susie Parkington with a genuine fire and a realness that comes through the screen. More impressively, she plays the character a multiple ages, from a 20-something young woman to a nearly 84-year-old matriarch, and she’s believable at every point. I like Agnes Moorehead, too, and she’s almost unrecognizable in the role here. I mean that positively. She couldn’t be better.

The main problem I have with the film is that it cause a few flashbacks to a stinker of a Best Picture winner by the name of Cimarron. Gus Parkington is precisely the same sort of character as the main player from that film. No one can tell him anything, he’s headstrong and easily offended, and he comes off as something like a douche. I know that’s the character, but he’s about as unpleasant as most of his descendants turn out to be. In fact, his only redeeming quality aside from his evident love for Susie is that he appears to have made his own fortune on his own.

But really, Greer Garson is the heart of this film, and she’s great to watch. While she’s entertaining in her younger incarnations (particularly her youngest) it’s as the older version of the character that she is at her best. Susie Parkington doesn’t take shit from people, and it’s a wonderful thing to see. She’s my new favorite Greer Garson character, and that’s saying something when Mrs. Miniver is in the mix.

Why to watch Mrs. Parkington: Because the ending is hardcore for 1944.
Why not to watch: It’s more predictable than you might like.