Not Quite My Tempo 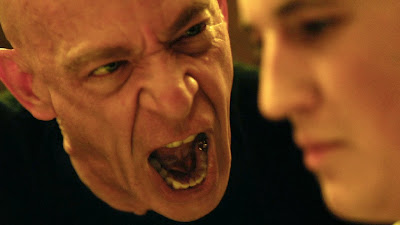 Typically, I spend a good portion of movie reviews going through the basics of the narrative of the film under discussion. I do this mostly because narrative and plot and how these things work within the context of a film are what interest me the most about film in general. I’m not going to do this for Whiplash. The reason is that Whiplash turns out to be a film that is very personal for me for a couple of reasons.

For all of the music, for all of the legendary abuse heaped onto the main character, at its heart, Whiplash is the story of the relationship between a teacher and a student. I am a teacher, and I have a number of students with whom I’ve developed a relationship over the years. That’s true with anyone who teaches. I have former students as Facebook friends and who talk to me if they see me out in the world. I’m certain that I also have former students who think I’m a massive jackass. But I can look at students who honestly took a leap of faith to trust me as a teacher. Far be it from me to call anything sacred, but if anything is, that sort of trust is in the running.

I also have two daughters who are involved in the arts. Both are ballet dancers, the older serious enough that she left high school to enroll in a college-level dance program at 15. I know what that world is like. I know the viciousness that can happen between mentor and student in any artistic endeavor. I know the long nights, the failed rehearsals. Where Andrew (Miles Teller) in Whiplash suffers through bleeding hands, I’ve seen my daughter suffer through bleeding feet from hours spent en pointe. As extreme as Whiplash may be, I know that reality sometimes comes close to what we see on the screen.

The issue I take with this is it very much feels like Whiplash endorses this idea. The central take of Whiplash, at least as I see it, is that the ends justify the means when it comes to any sort of artistic expression. If a teacher can coax a great performance out of someone through coercion, screaming, violence, physical abuse, or emotional degradation, well, it’s all to the good if that great performance happens in the end. I know that art requires sacrifice, sometimes huge sacrifice. What happens in Whiplash isn’t about sacrifice. It’s about abuse.

It’s entirely possible that I could get some of my students to write exceptionally well if I treated them with contempt and ridicule or threw my lecture notes at their head the way ensemble jazz band leader Fletcher (newly-minted Best Supporting Actor winner J.K. Simmons) does to our hyper-driven drummer Andrew. And if I did something like that, I’d lose my job not just before the day was over but before that class ended, and rightfully so. Even outside of a school context, Fletcher engages in behavior that doesn’t simply border on criminal, it crosses the line into it gleefully and gives the line the finger.

There are some real highpoints to Whiplash. First and foremost, the music really is spectacular when we are actually given more than a few bars of it at a time. If you don’t like classic jazz at all, there are going to be some rough times ahead in this film, but if you can appreciate Miles Davis or Thelonius Monk, there’s a lot to appreciate in the performances. Jazz isn’t my music of choice, but it’s also not music I’ll turn off if I hear it playing, and for me at least, the music here is pretty great.

The second noteworthy thing about Whiplash is the twin performances of Miles Teller and J.K. Simmons. Neither Andrew nor Fletcher are people I’d want to spend more than a couple of seconds with in real life, but that’s hardly the fault of the actors. In fact, it’s a testament to just how good these performances are that both of them are compelling on screen despite being awful people. Simmons, as the recent Oscar attests to, is magnetic on screen. There’s no not watching him whenever he’s in front of the camera. Since the word is that J.K. Simmons is such a sweetheart in real life (at least according to director Damien Chazelle), his turn as perhaps the most cruel cinematic taskmaster outside of a military boot camp is all the more noteworthy.

Miles Teller, at least in Whiplash, has what the Germans call a Backpfiefengesicht, or a face that is begging to be slapped. Again, in reality Miles Teller seems like a nice enough guy, so it’s a credit to his performance that he’s so personally repellent and yet so worth watching throughout the film.

Why to watch Whiplash: The music is great and so are the performances.
Why not to watch: The message is ugly.