Film: The Girl with the Dragon Tattoo
Format: DVD from NetFlix on big ol’ television. 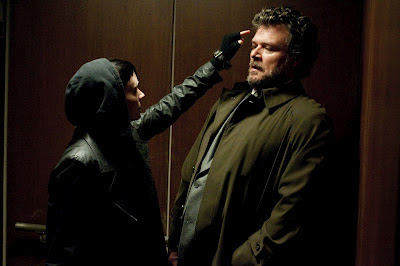 I’m a long-time fan of David Fincher. I decided that he was a director to start watching the minute I saw Se7en. For whatever reason, though, I didn’t really have any interest in The Girl with the Dragon Tattoo despite the amount of hype it received. If I had to think of a reason why, it’s because I’m always a little suspect of immediate American remakes of foreign films. I kind of object to them on general principles; it speaks to a dumbing-down of American culture. Somehow, a huge percentage of our population can’t appreciate something unless it shows up in English.

My other issue with the Fincher remake of The Girl with the Dragon Tattoo is that I’d been told by no small number of people that it’s very slow to start. This, by the way, is accurate. I wouldn’t call it a slow burn because once it gets going, there’s nothing slow about it. The film is more than 150 minutes long, and it starts out slowly and with a good amount of confusion. It picks up right about the time there are two hours left, becoming increasingly compelling as the stories unfold.

The first story entails the fate of Mikael Blomkvist (Daniel Craig), a journalist who has just been successfully sued for libel. It seems he went after an industrialist named Wennerstrom (Ulf Friberg) with good information but not enough proof. Now forced to step down from his suddenly struggling magazine, Mikael is hired by another industrialist, a man named Henrik Vanger (Christopher Plummer) for a different sort of investigative job. Forty years previously, Vanger’s niece Harriet disappeared, presumed murdered. He is convinced that a member of his own family killed her, and he wants the murderer brought to light.

Meanwhile, we also spend time with Lisbeth Salander (Rooney Mara), an anorexic-looking goth girl with multiple piercings. She’s emotionally damaged due to abuse but is also a top-notch researcher and talented computer hacker. It was she who did the background check on Mikael for Henrik Vanger. Considered still mentally incompetent, she is a ward of the state. Her new problems erupt when her current overseer collapses from a stroke. She's put under the care of a man named Nils Bjurman (Yorick van Wageningen), who demands sex for anything that she wants. Yes, she eventually gets revenge on him in particularly brutal fashion.

We don’t really have a connection between these two stories or characters until the middle of the film. Mikael finds out about Lisbeth digging up his past and present, so he goes to her with a plea for help. He wants her to assist him in tracking down the killer of Harriet, and evidently a number of other women, and she quickly agrees. This mystery, while a major part of the opening of the film, becomes the entire focus of the second half.

More than anything, I’m impressed by how subtly this film works. At 20 minutes in, I didn’t care about any of these characters or what was happening to them. At an hour in, I was completely invested in both Mikael’s story and Lisbeth’s story. At some point, I started to care about what happened to them, and I’m not sure precisely when that happened. But happen it did, because I was invested up until the end.

What doesn’t work for me here is the framing device of the libel suit and the pursuit of Wennerstrom by Mikael. I suppose in one sense it’s necessary, because the information on Wennerstrom is what prompts Mikael to take the job investigating the murder in the first place, but other than that, it feels unnecessary. Since this encompasses the first five minutes or so of the film as well as the last 15 minutes, I am under the impression that the film could be naturally cut down to a more reasonable length without much problem. Now, this is without any knowledge of the continuing story. It may turn out that this information is critical for the next two books/movies, but I have no way to know this. My hope is that it does, because otherwise, it feels tacked on, like it was put here simply because it was in the book despite it having very little to do with the actual story being told.

Rooney Mara deserves a great deal of the credit for making the film work. She casts an odd shadow over the proceedings, with her frankly ghastly appearance. I understand that she’s supposed to be anorexic and gothic, and she certainly is. The facial piercings add to this, as does her desperate thinness—her face looks like a skull through most of the film, and this is doubtless intentional. Of far more interest than her gaunt appearance, though, are her mannerisms. Mara plays Lisbeth as someone who is determined in all that she does, but who is also emotionally broken, translating this as a complete shutting down of emotional affect. It works, and the performance is a noteworthy one.

At the end, I suppose I found the film an interesting one despite its slow start. Seeing that it comes to a solid conclusion, though, I’m not sure how excited I am for the next film in the series, a statement that probably says more about my opinion than anything else.

Why to watch The Girl with the Dragon Tattoo: Once it gets going, it really doesn’t stop.
Why not to watch: If you can’t get through the first 30 minutes, you won’t make it through.

Posted by SJHoneywell at 5:53 PM