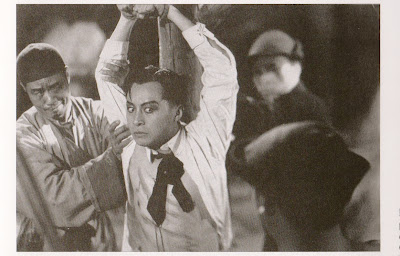 Watching older films is always something of a crap shoot. NetFlix was pretty certain based on its suggested rating that I wouldn’t think much of Ye Ban Ge Sheng (Midnight Song or Song at Midnight). Generally speaking, NetFlix is pretty accurate. In this case, the rating was pretty accurate, but it’s honestly not entirely the fault of the film, or at least not the fault of the story or how it was filmed. Oh, there’s plenty of silliness here, including some ridiculously sped-up camera work, but that’s more on when the film was made.

Allow me to better explain. Ye Ban Ge Sheng is in terrible shape. This is a film that looks like it’s spent a couple of dozen years rotting in a basement before this version of the DVD was made from it. There are places where the photography is so dark it’s difficult to make anything out. In other places, scratches and pops slide up along the film. Frequently, the sound fuzzes out, making the actors sound like they are speaking underwater. For a film so highly regarded as a classic of Chinese cinema, someone needs to show it some care and attention.

At its essence, this is a retelling of The Phantom of the Opera, although the plot takes some significantly different turns. At a theater, a cloaked figure sings to two women standing in a window. We’re not given an explanation of this yet. Instead, we meet a troupe of traveling actors who have come to play this theater. Chief among them is Xiao Ou (Si Chao).

Given a new opera to sing, Xiao Ou struggles with the music and claims that he must be alone for some time to work it out. While practicing, he hears a voice helping him with the music, and when the opera is performed, it is wildly successful. Looking to find the spirit that helped him, Xiao Ou encounters the same cloaked shape from earlier. We learn that this is no spirit, but a man named Song Danping (Jin Shan). He tells Xiao Ou that he would like to help him with the music. He also tells his story. Years before, he was a revolutionary who fought for the Kuomintang. After three years of fighting, he quit and became an actor, falling in love with a woman named Xia (Woo Ping), the younger woman from the beginning of the film.

Sadly, Xia’s father did not approve of her romance with an actor, and had Song Danping captured and beaten. A rival for Xia’s affections, Tang Jun, has acid thrown in the actor’s face, disfiguring him terribly. Rather than face Xia in his current state, Song Danping tells others to say that he has died. Since that time, he sings for Xia at night, while she spends her time in a mentally unbalanced state caused by what she believes was the death of her lover.

No, with Xiao Ou, Song Danping wishes to have his own revolutionary operas performed. Unfortunately, Tang Jun is still around, and has fallen for Xiao Ou’s lover, setting up the final act confrontation between Tang Jun and Song Danping.

Ye Ban Ge Sheng is an interesting take on the classic story, but it’s an odd one. For one thing, much of the music in the film is Western, and seems strikingly out of place throughout. There are also places where the odd happenings on the soundtrack could not be explained by the desperate need for a restoration of the film. Music cuts off abruptly when a scene shifts, for instance, going from a full orchestra to nothing in the middle of a bar of music. It’s jarring to say the least. Similarly jarring is the sped-up action at the end of the film. Tang Jun and Song Danping fight in double time, and the effect isn’t one of heightening the action, but of comedy.

The biggest problem, though, is the quality of the print. At times, the film is almost unwatchable because of the shoddy quality of what remains. The watery sound, scratches, and pitch black photography make watching this film a chore. I would be willing to give it another shot someday provided someone spends a little time and attention on the film. Until then, this is one that must remain interesting as an idea, but sadly difficult to sit through. It deserves a better fate than essentially being only partly there, but that’s simply the truth of things.

Why to watch Ye Ban Ge Sheng: A strange take on the Phantom of the Opera story.
Why not to watch: It’s desperately in need of being restored.