Remakes exist in a weird area in films. Any remake needs to be judged on multiple criteria: those of the film itself and those of the original film. It’s impossible to do otherwise. As an example (and one as different as possible from today’s film), John Carpenter’s 1982 film The Thing can be judged as a science fiction/horror film and is also judged against its 1950s predecessor The Thing from Another World. It’s only natural. We have the question of whether or not it is a good film, and whether or not it stacks up against the original. 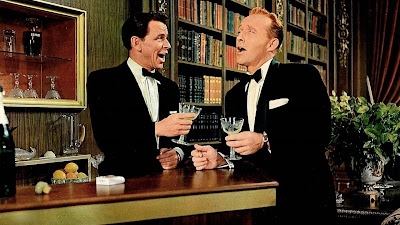 That’s precisely the situation we have with High Society, which is a pure remake of The Philadelphia Story with the recasting being more in the musical vein, an appearance by Louis Armstrong and his band as themselves, and a bunch of songs written by Cole Porter. So, the questions here are whether or not this stands up as a musical and how it compares with a classic film with such luminaries as Katherine Hepburn, Carey Grant, and Jimmy Stewart.

So, here’s the quick and dirty on the story. Society heiress Tracy Lord (Grace Kelly) has divorced C.K. Dexter-Haven (Bing Crosby) despite his objections. She’s now about to get married to George Kittredge (John Lund), and Dexter has returned in part because of a jazz festival that he created and in part because he’s still in love with his ex-wife. Tracy’s father (Sidney Blackmer) is a philanderer who has left the family home to take up with a ballet dancer. A story on this is just about to be printed in a tabloid called Spy. However, Tracy’s Uncle Willie (Louis Calhern) cuts a deal. If Spy can send a couple of reporters to the wedding, they’ll pull the story on Tracy’s father.

So, we get a reporter named Macauley “Mike” Connor (Frank Sinatra) and a photographer named Liz Imbrie (Celeste Holm) to show up. Tracy tries to put on a show for them, but it falls through. Eventually, Mike starts to fall for Tracy, and Uncle Willy can’t leave Liz alone, but Liz is madly in love with Mike. And thus we have not a love triangle but sort of a love octagon.

If you’ve seen The Philadelphia Story, there aren’t any surprises here. The high points are still the same. The most surprising in many ways is the complete dressing down of Tracy by Dexter, a positive confirmation of the same qualities by George, and then another dressing down by her father. The complaint is that she has no ability to accept the faults of other people. Everyone compares her with a goddess or a statue, or something on a pedestal. For George, this is a positive. For Dexter and Seth Lord, this is a terrible fault in her.

It’s the personalities that make the film and the interplay of the characters. The dressing down of Tracy works because before it happens, that’s exactly how she behaves. It works because it’s accurate and we’ve seen it be accurate; in fact, it’s entirely likely that the majority of the audience is nodding along. I was. We need to dislike George since it’s pretty evident right away that he’s not going to end up marrying Tracy, and he is suitably a stick in the mud. Our sympathies, though, need to be with Dexter, Mike, and Liz, and all three are charmers.

On its face, this is a cute film. The story is a fun one and the relationships are complex enough to be interesting for the duration. It’s also greatly aided by a few really good numbers. Not all of them are show stoppers, and at least one—where Bing Crosby sings a love song to a 10-year-old—are a bit pervy if you think about them too hard. However, the songs are more than simply entertaining. They are frequently smart and offer a sly wink to the audience. When, for instance, in the middle of “Well, Did You Evah!” Frank Sinatra compains of Bing Crosby’s crooning and Bing responds with “You must be one of the new guys,” it’s a fourth wall break that works beautifully.

There is a bit of strangeness, though. The film starts with a four-minute plus prologue and a two-minute credit sequence. It’s a good six and a half minutes before we see a person, and we see not the main cast, but Louis Armstrong and his band. Louis, who is playing himself, gives us a real Greek chorus-style prologue, telling us exactly the story that has transpired up to the beginning of the film with a Calypso-style number. With all this, it’s a good nine minutes or so before the actual film starts.

The real question is how well this stacks up against its predecessor. The sad truth is that it pretty much doesn’t. I enjoyed The Philadelphia Story more in almost every respect, and this has nothing to do with the singing in this one. This is certainly a must-see for the musical crowd because it really is a fine musical. If your tastes don’t swing that way, though, the original is the better film.

I want to be clear on this, though. This isn’t a film to specifically avoid. The main knock against it is that there’s another version of exactly the same story with exactly the same character names that is better.

Why to watch High Society: It’s a good story entertainingly told.
Why not to watch: If you’ve seen The Philadelphia Story, do you need to see it again?