Film: The Lady from Shanghai
Format: Internet video on laptop. 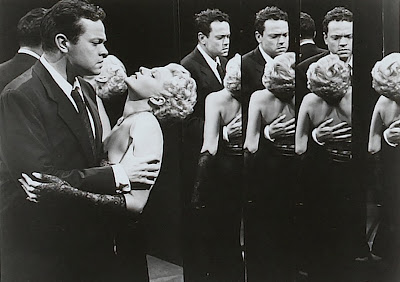 I have to say that I’ve been a pretty happy customer of NetFlix for the past couple of years. Eventually, there had to be a problem that would crop up. I got The Lady from Shanghai yesterday in the mail. Since the best way to make use of NetFlix is to turn films around as quickly as possible, when I get a film, I tend to watch it right away. I had my heart set on The Lady from Shanghai today, but the disc I got had a sizable chunk missing from it. I don’t mean that the disc was somehow erased, but that there was an actual piece missing from the DVD.

So rather than dig through the personal collection, I found a copy of the film online and watched that version instead. While there were a few rough spots in the sound, it was a pretty solid print overall. Internet video gets a bad rap sometimes, but I don’t have a huge problem with it in general. I’m just happy I found a copy I could watch, so as to see the film for which I had geared myself up.

Michael O’Hara (Orson Welles) is a seaman who has a violent temper. He’s been in trouble in many different parts of the world, enough that he’s capable of discourse on the quality of prisons on several different continents. One fine evening, he sees a woman Elsa (Rita Hayworth) in a carriage, and offers her a cigarette. Moments later, the woman is accosted by a group of thugs, and Michael rescues her. He rides with her in the carriage and they talk, and he admits to his past, including a murder. This seems to intrigue her, and she offers him a job on her yacht.

Eventually, he takes the job sailing from one coast to the other through the Panama Canal. Along the way, several important things happen. First, Michael discovers that Elsa (who prefers being called Rosalie) is married to a man named Arthur Bannister (Everett Sloane), the best criminal attorney in the country. Bannister is a physical invalid, walking with a pair of canes. He also meets Bannister’s partner George Grisby (Glenn Anders), who is far too jovial to be real. There’s another man on the boat, too. This man, Broome (Ted de Corsia) is actually a private dick working for Arthur Bannister.

And then, like any good noir, things become complicated. There’s no shock when Michael and Elsa/Rosalie become involved with each other. It’s not even much of a problem when it’s apparent that Grisby is aware of their affair. Grisby, though, wants Michael’s attention for a different reason. He wants to disappear. The only way he can do that is to “die,” and to do that he needs Michael’s help. Michael will fire off a gun at the docks and then will claim that he shot Grisby. Grisby, unharmed, will sail off to the South Pacific, legally dead. However, Michael won’t be tried for the murder, because the laws at the time stated that without a body, murder could not be proved. Michael walks away with five grand and, in his mind, Elsa/Rosalie.

However, since this is film noir, nothing goes like that, and Grisby’s plan is merely the bare surface. It runs quite a bit deeper, much of that coming from the direction of Elsa, which won’t be a surprise to anyone who has watched a couple of films noir. Of course Michael is being set up and of course Grisby’s plan is something more, and no one, except for the poor patsy Michael is what they seem to be.

So let’s talk about the good. It’s a fun plot and has just the right number of twists and turns to make a film noir really click. Rita Hayworth, an actress with whom I am not particularly familiar, is a great femme fatale—she’s beautiful and inviting, and can turn that charm off and on in a heartbeat. It’s also a film directed (uncredited) by Welles, and it’s still in the earlier part of his career when his powers were at their height.

There’s a lot here that doesn’t work, though. Primarily, Welles cannot pull off a convincing irish accent to save himself, and despite myself I wanted him to start talking about pink hearts, yellow moons, orange stars, and green clovers. The film also contains some of the most ridiculously bad rear projection in recent memory. Most of it simply looks ridiculous. The scene in the aquarium, though, is particularly ridiculous. Staging the meeting between Elsa and Michael around vicious sea creatures—sharks, eels, lionfish—was undoubtedly intended to be a subtle play at the idea that she is much like those cold, vicious animals. Instead, since the proportions are off, Rita Hayworth stands in front of a projection of a moray eel that is at least four times the size of a real animal.

The end of the film provides both the ultimate success and ultimate failure of the film. On the one hand, it is perhaps the greatest climactic scene from any film noir. We get a confrontation in a carnival fun house hall of mirrors between Michael, Elsa, and Arthur Bannister. It’s a surreal moment, and it works really well. The problem is that The Lady from Shanghai takes such a circuitous route to get there, that by the time we’ve had a trial and a couple of murders and a few betrayals and a faked suicide attempt and a desperate escape from the court that it all seems so ridiculous and beyond even a typical film noir that it becomes difficult to care.

The Lady from Shanghai has brushes with greatness and many of the elements of a great noir, but has too much working in the other direction to make it one of the best.

Why to watch The Lady from Shanghai: Noir by the numbers and even more so.
Why not to watch: Welles can’t pull off the accent to save his life.