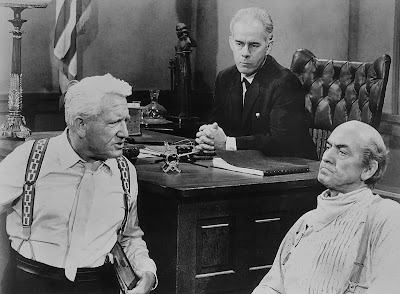 I love Inherit the Wind. When I think of films that I genuinely love, films that I can watch repeatedly with no loss of enjoyment, this is one that springs to mind. I don’t know at this point how effusive I’ll be in this review, but I can tell you now that I consider Inherit the Wind one of the few films that is virtually perfect. It's beautifully cast, has a magnificent script, and is as well acted and directed as anything I’ve seen.

This film is essentially a fictionalized version of the Scopes trial. It ramps up the drama, of course, gets rid of a lot of the legal stuff, and gives us a family drama underneath along with a great deal of fire and brimstone preaching. Assuming that you may have fallen asleep during this part of history class in school, the Scopes trial was the one in which a teacher was accused of breaking a state law in Tennessee for teaching evolution in a classroom. While a number of liberties are taken with the story here, it still conforms in general (and in result) to the historical trial, a case in which the fictionalization of a historical event actually works perfectly.

So we start in the little town of Hillsboro where a group men enter a school room and arrest the teacher, Bertram Cates (Dick York). There’s a big to-do in newspapers around the country, and furthering the hoopla, former presidential candidate and noted religious campaigner Matthew Harrison Brady (Fredric March) agrees to help the prosecution. This sparks the arrival of newspaper columnist E.K. Hornbeck (Gene Kelly, who will do no dancing or singing in this film). At a parade in honor of Brady, Hornbeck announced that his paper will be providing the lawyer for the defense: Henry Drummond (Spencer Tracy), noted agnostic, lawyer, and former friend and confidant of Brady.

And so, we have a great set-up, but one that might well sound dull. Don’t worry. Once the trial starts, the bulk of the movie does take place in the courtroom, but there’s a lot going on outside as well. We learn, for instance, that Bert Cates is engaged to Rachel Brown (Donna Anderson), who is also the daughter of the Reverend Jeremiah Brown (Claude Akens), whose pretty fire-and-brimstone-y. In fact, we see at a revival-style meeting that Reverend Brown is willing to give up on his own daughter to bring down any rage and hellfire on Bert Cates.

Matt Brady is using the trial as a platform for his religion, using mealtime to make pronouncements to the press who have shown up for the trial. He also browbeats poor Rachel on the stand, reducing her to a pile of jelly. This brings out the reason for Cates’s split with the church comes from the death of a young boy. Since the boy didn’t die in a state of grace, Reverend Brown preached that the boy was writhing in hell. The judge (Harry Morgan) seems predisposed to side with the prosecution and is coerced by Brady to excluding all of Drummond’s witnesses. All of this culminates in Drummond calling Matthew Harrison Brady himself to the stand and quizzing him on the Bible.

As I said at the start, I think Inherit the Wind is a near-perfect film. A big part of this is the intelligence of the screenplay. For instance, we need to know that there is a past history between Brady and Drummond. We see Drummond’s arrival and their meeting, and while we learn that they were friends, we don’t get the depth of the connection. We get this instead in a couple of short scenes. In the first, while Matt Brady preaches in the background, Henry Drummond invites Brady’s wife Sarah (Florence Eldridge) to sit with him. Their conversation is so natural and comfortable that we immediately understand that these are people who know and like each other, and we understand the real weight of their history together. Later, Brady and Drummond sit on the porch of their hotel and talk for a few minutes, and we’re led to understand the depth of their respect for each other and the pain both feel at being on opposite sides of a fight.

Another joy of this film is the tremendous cast. It’s nearly perfect in this respect as well, and Fredric March and Spencer Tracy are well set against each other. Both give performances that rank among the best of their careers, and I find it something of a tragedy that only Tracy was nominated for an Oscar here. The great casting continues down the line, with Gene Kelly giving a surprisingly strong and cynical performance throughout. If I need to find a weak link, it would be Donna Anderson’s Rachel, who is perhaps too intense and too preachy to be taken at face value.

I also like how closely this conforms to the history. Matthew Harrison Brady is an obvious analogue of William Jennings Bryan and Henry Drummond is the film equivalent of Clarence Darrow. E.K. Hornbeck stands in for G.K. Chesterton, who covered the actual trial. Even the results of the trial and the aftermath are closely related to actual history, but different enough for dramatic purposes.

So anyway, if you haven’t seen Inherit the Wind, go get it now and watch it. If you have seen it, you should know what I’m talking about. So go watch it again.

Why to watch Inherit the Wind: One of the great films of its or any other decade.
Why not to watch: If you watch with someone of a different opinion, it’ll cause an argument.