Off Script: The Keep 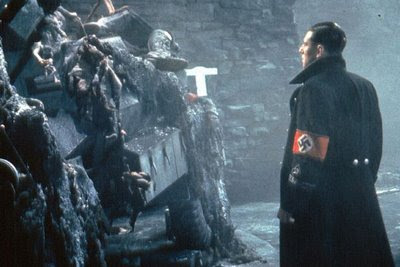 Odd horror movies are a fun place to look for known actors after the fact. The 1983 supernatural horror film The Keep, for instance, features a host of actors in the relatively early stages of their film careers—actors who have since gone on to be noteworthy, award winning names. There is a real joy in seeing someone you know from recent films in a much younger incarnation.

The movie takes place during World War II. The Germans have moved into Romania and a group have moved into an ancient keep (of the title) as a place to set up shop. The keep is large, well-protected, and otherwise impressive, so it seems a natural place for them to use as a headquarters. Upon arrival, they discover that there is a series of nickel crosses embedded in the walls, and they are warned not to touch them.

Of course, the soldiers don’t listen to orders, believe the crosses are made of silver, and immediately start to mess with them. And, since this is a horror movie, messing with the crosses releases a terrible evil that the keep was built to protect. Isn’t that always the way? Soldiers start showing up dead in horrible and twisted ways, and the Germans naturally blame the Romanians in the village and start executing them in retaliation.

Mysterious writing appears on one of the walls of the keep and Mikhail (Robert Prosky), a local priest is brought in to interpret it. He can’t though, and instead suggests they bring in the services of Dr. Theodore Cuza (Ian McKellen), a Jewish historian currently languishing in a concentration camp. Cuza is suffering from a wasting disease (this is important), and cannot move without Eva (Alberta Watson), his daughter. The two are moved into the keep so that he can begin figuring out what is going on.

It’s also around this time that we get two other things going on. First, we have a good German/bad Nazi situation. Jurgen Prochnow is our non-Nazi German officer who is disturbed by the killings of his men and by the random destruction of the Romanian peasants by the SS. Gabriel Byrne plays the vicious bad guy, intent on dominating the countryside and killing off anything that stands in his way. Also, we’re introduced to a Mysterious Stranger (Scott Glenn), who is mysterious enough to need that title capitalized. He’s evidently awakened by what’s going on in the keep, and so he travels there, and we’re given a quick glimpse of his otherworldly power as he makes his way past some guards.

So the big nasty thing inside the keep is trying to get out, and it saves Eva from being raped by Nazis, then cures Cuza’s disease. Naturally, Cuza feels obligated and agrees to do what it wants. What it wants is for a particular talisman to be removed from the keep so that it can leave. It promises that it will wipe out the Nazis when it is free, and it has to be admitted that it’s doing a pretty good job of wiping out the Nazis inside the keep. So Dr. Cuza agrees. In the meantime, Eva has a little sexy time with the Mysterious Stranger.

What happens after this can probably be guessed. The creature is, of course, pure evil, and the Mysterious Stranger is, of course, sent to keep it in its place. And there’s a big battle.

There are a few important points that need to be looked at with The Keep. First, the special effects are not that special, and only barely effects. Much of what is done is done by shrouding as much as possible with thick smoke. There’s fog everywhere all the time. The talisman, when we finally see it, is little more than a flashlight with fins on it (and yes, I get that it looks exactly like the crosses around the keep). The creature is naturally tall, but also essentially a mannequin with red light coming out of the eyes and mouth. Not too scary, and very, very fake. Supernatural events are depicted by computer-generated light shows that look like what they are—cheap animations done in the early 1980s. We accepted them back then, but 30 years later, we’ve seen better, and these look cheesy.

What’s more interesting is the cast. When Ian McKellen first shows up, he looks exactly the same, like he’s always been in his mid-60s. Then, when the creature cures him, he looks positively dewy. Seriously, it’s a young Ian McKellen, and it’s really strange. However, it’s not nearly as strange as the fact that the person doing the makeup effects on him managed to figure out exactly what he’d look like 20-25 years later. Gabriel Byrne is similarly odd because he looks fresh out of high school. And evidently, Scott Glenn stopped aging in 1981, because he looks exactly the same in this film as he does now.

The Keep is not a great film, or even a very good one. There’s some entertainment value to be had here, but this is not something I could imagine being scary when it was made, let alone 30 years and several major advances in technology later. It’s interesting mostly as a curiousity and for the strange, not very fitting soundtrack from Tangerine Dream.

If you’re looking for horror, you’re better served looking elsewhere. But it’s worth it to see Gandalf/Magneto when his face was still unlined.

Why to watch The Keep: A smooth-faced, dewy Ian McKellen
Why not to watch: It’s completely unsatisfying.