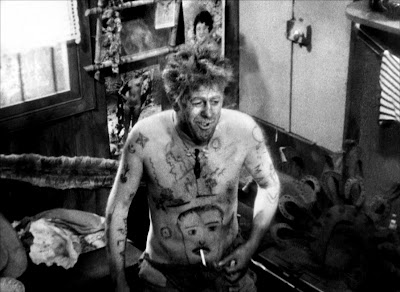 There have been many careers in the arts that have been tragically cut short, but perhaps none so much as that of Jean Vigo. Dead of tuberculosis at the tender age of 29, Vigo directed two documentary shorts, one other short film (Zero de Conduite), and L’Atalante. Thus his first full-length feature was also his last. One wonders he might have produced if only he had lived a little longer, since this one feature shows a real depth of understanding of the film medium as well as some prescience; L’Atalante might well presage La Nouvelle Vague in certain ways.

The story is a simple one. Jean (Jean Daste), the captain of a river barge called L’Atalante, is married to Juliette (Dita Parlo). Their honeymoon is essentially a trip to Paris by way of La Havre. It’s an unromantic boat journey since the ship is also carrying cargo. It’s also not a very pleasant trip, as Jean proves himself to be the insanely jealous type. When he finds Juliette speaking in the ship’s cabin with the old and mildly foul Pere Jules (Michel Simon), he goes completely berserk. Jules, though, while evidently a bit infatuated with Juliette, certainly has no designs on her.

Eventually, the ship reaches Paris, and eventually, Jean and Juliette get off the ship and get to explore the city. What they see is pretty cheap and tawdry, but Juliette seems to be rather taken with it, particularly with a peddler who asks her to run away with him. Naturally, this leads to a fight with Jean, and he takes her back to L’Atalante and leaves her there. But she is enamored of the excitement of the city and is bored with the ship, so away she runs.

This leaves the jealous Jean at first angry, and he pulls the ship out of harbor immediately. He then becomes despondent, and not even Pere Jules fixing the phonograph can cheer him up. The final act of the film is the two lovers separated and pining for each other. I won’t reveal how this all ends up, but there are really only a couple of possibilities.

There is a sort of delightful naivety to L’Atalante, a sort of simplicity that is rare in general and virtually unknown today. Vigo’s film is undeniably simple. There is only one real conflict, and it doesn’t come to a head until the film is two-thirds complete. The only complication in the drama is that the moment Jean discovers that Juliette has left the boat, he reacts with the anger we’ve seen from him and leaves right away. Even this will need to be resolved by the end of the film, though, and of course it will be in one way or another.

I attribute this to the fact that Vigo was a young filmmaker and was making his first attempt at a feature-length film, one that was notably edited down to a mere 65 minutes on its initial release, making its theatrical version “feature length” only by the most forgiving of people. Vigo was still learning the craft when he made L’Atalante, and a lot of that shows through. He had a good visual eye, and a prescient sense of what would become popular in terms of how visual stories are told.

What he didn’t have, and thus never developed, was an ability to tell a complicated story, or one that had more than the most basic and straightforward of plots. This is a real shame and a real loss for the film world, because he obviously had a good deal of talent, and could at least manage to keep a simple story from imploding on itself. He also managed to coax passable performances out of his stars and a very entertaining one from Michel Simon. Pere Jules is a great screen creation. There’s a sort of dirty charm to him. He is a physically degraded man, ugly, not very bright, and filled with disgusting habits. Yet, despite this, it’s impossible not to like him. This is something he didn’t pull off in Boudu Sauve des Eaux, directed by the better known and much more accomplished Jean Renoir.

There is a scene toward the end where the two lovers are having trouble sleeping separately and are pining for each other. This is an interesting sequence if only for its rather interesting sexually charged imagery (complete with Juliette running her hand inside her own nightgown followed by a very quick cutaway). A lot of the film has a surprising amount of sexuality to it—Jean and Juliette don’t quite hump each other, but they come close a couple of times. It’s okay for the censors because they are married, but still, it’s more than I expected.

There’s nothing wrong with simplicity. The tragedy of this film is knowing that Vigo didn’t survive long enough to give us anything else, and that this simple story is thus forced to serve as a sort of epitaph for him. He deserves something more.

And with that, I’m finished with the earliest 100 films on The List.

Why to watch L’Atalante: It reveals the promise Jean Vigo had.
Why not to watch: Because, depressingly, it’s pretty much all there is of him.