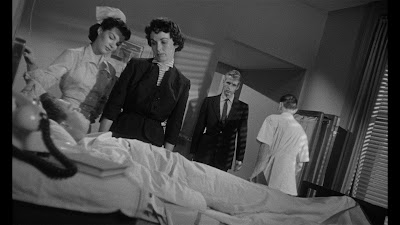 If you ask me why I like film noir as much as I do, I’m not sure I could give you an answer specifically. There are too many aspects of noir that work for me. I like the visual style of a good noir, and the use of light and shadow. I like the fact that films noir tend to be morally murky at best. I like the idea of the femme fatale as a concept and often as a character. I like whipcrack dialogue and sudden bursts of unexpected violence. I like plots that are complex without being complicated. Naturally, I’ve watched a good deal of the noir on The List, but not quite all of it. I didn’t quite know what to expect from Kiss Me Deadly except noir-y goodness. Now that I’ve seen it, I’m really not sure what I got.

We start as private detective Mike Hammer (Ralph Meeker) nearly runs down a woman named Christina (Cloris Leachman) on the road. It’s evident that she is wearing only her trenchcoat and she soon reveals that she has just escaped from an insane asylum. She tells Hammer to remember her if she doesn’t make it to her final destination. She doesn’t; we see her twitching legs and her her being tortured moments later while Hammer lies unconscious nearby. Hammer is put into a car with her body and pushed down a hill, but he survives the wreck and wakes up in a hospital.

Inspired and enraged by these events, Hammer goes on a quest to discover exactly what is going on. We meet Velda (Maxine Cooper) who is Hammer’s secretary, assistant, part-time lover, and woman he uses to seduce men during those times he works on divorce cases. We also meet Lily Carver (sort of, and played by Gaby Rodgers), who was Christina’s roommate. She asks for Hammer’s protection, and seems more than willing to offer the femme fatale’s favorite weapon—sex—as a reward.

There’s also a McGuffin floating around, a “great whatsit” that seems to be what a series of police, government officials, and various bad guys are looking for. Hammer goes looking, gets in a few scrapes, and eventually manages to find it. And here’s where we take a hard and fast turn for the weird. The McGuffin is a box, and inside the box is a glowing thing that makes a loud screeching noise. To put it in more modern terms, it’s a cross between the thing in the trunk from Repo Man and the briefcase in Pulp Fiction.

Naturally, it can’t ever be that simple. Velda gets kidnapped, Lily Carver turns out to be something very different than she has portrayed herself, and all hell eventually breaks loose. In this case, I mean that pretty much literally. I’ll leave you to imagine what’s in the case, but it glows, causes severe burns, and the film was made at the height of the Cold War. It’s not that difficult to put something in the box that makes sense on all of those fronts.

What makes this film very interesting is that our hero, Mike Hammer, is completely despicable. He’s a womanizer, a jerk, self-interested, callous, and crude. Frequently, he is not merely violent to get what he wants but extremely cruel physically and emotionally. Hammer is the only thing we have to latch onto as a hero in the film, but he does not act in any way like what we expect of a film hero. It’s actually difficult to root for the guy because he’s such a complete creep throughout. And yet, true to its Mickey Spillane roots, Hammer is also relentlessly attractive to every woman in the film. The man is greeted with a kiss by woman after woman, frequently upon a first meeting.

This is a style-rich film, and one that is fascinating on that front. Robert Aldrich makes consistent use of skewed camera angles both to imply the confusion of the characters as well as to keep us in the audience from ever being settled anywhere. We are constantly kept off balance as the story continues, with new twists turning up at a constant clip.

The problem is that once we discover what is in the box, the film becomes something different from a noir, both more and less. It edges pretty firmly into the realm of science fiction, and without the buy-in from the start, it ends up being pretty silly. It’s also hard to follow. There are simply too many players to keep straight, and too many names. Many of these names are tossed off to us as characters pop up for a scene or two and then disappear, never to be seen again or mentioned again. Complex is fine for noir—noirs should be twisted and turning paths, but this one is merely complicated.

Friend Squish at the Film Vituperatum mentions in his review that this film contains more than a soupcon of man-on-man face slapping, and that it does, much of it in the last half hour when Mike Hammer seems to be nothing but a bitch-slapping machine. He couldn’t throw a punch in there somewhere?

Anyway, Kiss Me Deadly had its atomic heart in the right place, but it does too many things that prevent it from being taken seriously. With film noir, that’s perhaps the biggest sin possible.

Why to watch Kiss Me Deadly: Because it’s film noir at the end of the era.
Why not to watch: Ultimately, it’s kind of dippy.