The People Really Under the Stairs 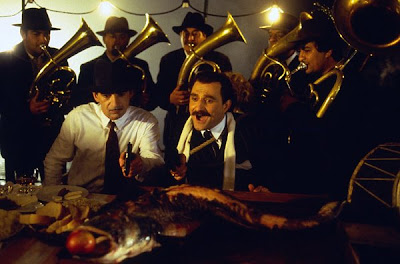 There are only a few ways to react to the memory of war. One is with horror and revulsion, and it is perhaps the most natural reaction, and the most powerful. There are many who react to war with a sense of adventure and excitement, which is surprisingly common, at least in film. There’s no lack of films that tout the military and suggest that war is something to be approached with anticipation. And then there are those who choose instead to approach war as black comedy or farce. Films like Kelly’s Heroes, Catch-22 and M*A*S*H certainly do this. So does Podzemlje (Underground), although this film is more about the aftermath of World War II and the politics of what used to be Yugoslavia than it is specifically about a war.

That being said, there is not a single thing that will prepare you for just how perverse Podzemlje is. The film begins with the start of World War II in Yugoslavia. We meet two of our three principle characters. First there is Blacky (Lazar Ristovski, who looks a lot like Judd Hirsch), who is married and whose wife is expecting a child. Next is his friend Marko (Miki Manojlovic). The two are out drinking with a crowd, and Blacky has been signed up as a member of the Communist Party to work with Tito. Blacky’s wife accuses him of having an affair with an actress named Natalija (Mirjana Jokovic). Her accusations are correct no matter how vehemently Blacky denies them.

And then the blitz is on. Animals run from the zoo, leaving poor, stuttering Ivan (Slavko Stimac) distraught. He manages to rescue a chimp from the broken cages. Marko and Blacky go on with their lives as if nothing happens. Many of the people in their town run to a shelter. Blacky’s wife has the baby, names him Jovan (played eventually by Srdjan Todorovic), and promptly dies. This leaves Blacky free to pursue Natalija. Sadly for him, Natalija quickly becomes involved with Franz (Ernst Stotzner), a German officer, and she performs nightly for the benefit of the occupying troops.

In one of the most surreal scenes, Blacky goes to a performance and in the middle of the play, walks on stage. He ad libs his way into the scene, has Natalija tied to his back, and shoots Franz in the chest before running off with Natalija still strapped to his back. His intent is to marry her, although at one point Marko makes a play for her, too. Instead, Blacky is captured by the Nazis, Natalija immediately switches sides back to Germany, and Marko gets away. He goes back and rescues Blacky, though, and brings Natalija and her wheelchair-bound, insane brother Bata (Davor Dujmovic) with him. However, and accident nearly kills Blacky during the escape. We learn also that Marko is highly placed in Tito’s trust, and becomes important in the postwar government.

And then 20 years pass. Marko has married Natalija. She is still the darling of the Yugoslav acting world and Marko is still highly placed in the party. And that’s when the big twist hits. Blacky and a number of other people are still living in the underground bunker, convinced that the war is still on and that Germany still occupies the land above. Marko maintains the charade because the people produce weapons for him. Marko’s father manages to mess with the clock, turning it back six hours a day so that in 20 years, the people below think they have lived only 15. Periodically, Marko returns to the underground beaten, claiming to have been interrogated by the Nazis. Everything comes to a head when Jovan, who is objectively about 23 and subjectively about 18, gets married. This causes Blacky to want to go out and fight the non-existent Nazis, even if it means going against Tito’s direct orders. He does, and he shows up right in the middle of a film set that is creating a propaganda film based on Marko’s memoirs during the war.

Like any good farce, Podzemlje is extreme. The situation is extreme, because farce doesn’t really work unless we have a situation that is otherwise unbelievable. And yet, for how extreme our situation is, the humor comes not just in the broadest strokes. Certainly, there are some very broad strokes in the humor. When the Germans bomb the city, for instance, it catches Marko in the middle of having sex with a prostitute. When she runs screaming as the bombs drop, he, uh, finishes to the sounds of explosions. Meanwhile, Blacky finishes his breakfast while his house shakes around him, and when he does go out, his wife accuses him not of going to fight, but going to cheat on her—while the bombs are dropping. And we find out that essentially she was right. When Blacky is injured during his rescue, it’s not from German gunfire, but his own stupidity. Packed into a large trunk, he asks for a grenade so that he can kill himself rather than be recaptured again. He fiddles the pin out of the grenade and drops it when startled. After the explosion, Marko drags him back to the hideout, one leg still sticking straight up out of the ruined trunk.

It’s also surprisingly sexual. Natalija especially is a sexual creature, switching bedmates depending on the fortunes of war. There are a couple of pretty racy moments with her, and while there is nothing explicit going on here, there’s quite a bit implied. Her dance on top of the comrade-made tank in the bunker, swinging around on the necessarily phallic gun is quite racy, not only because of her skin-tight red dress.

Despite all of the comedy and silly situations and dirty dancing, Kuristica doesn’t shy away from at least part of the reality of the war. The second act of the film is interspersed liberally at the start with actual color footage from the war, and the destruction is complete. That the situation our characters find themselves in is ridiculous doesn’t change this. They are in that situation precisely because of the terrible nature of the war and the terrible nature of the peace in Yugoslavia.

It’s also worth noting that this film makes use of some special effects that don’t really work. In an effort to meld Marko into history, he’s “Forrest Gumped” into some footage of Tito. It’s always evident when he has been entered into a scene, and when the camera cuts away from stock footage to him, it looks like two different films. In a non-comedy, I’d complain. Here, the amateurish special effects actually add to the comedy.

The film this reminds me of more than any other is Hori, Ma Panenko. However, since this film is much newer than that one, the humor tends to translate better. Podzemlje is funny and crude and cruel, and worth every minute of its run time.

Why to watch Podzemlje: An Eastern European story filled with universal humor.
Why not to watch: The story is pretty difficult to believe.