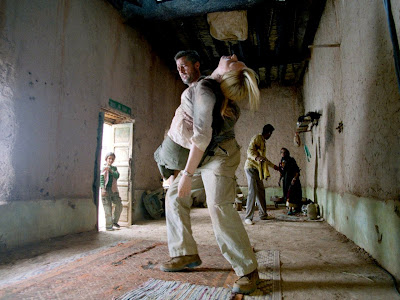 Alejandro Gonzalez Inarritu’s Babel is the type of film that defies being summarized. There’s too much going on in this film and too much that doesn’t make any sense for a large portion of the proceedings. This doesn’t mean I didn’t like Babel because that would not be accurate. It also doesn’t mean that I’m not going to try to come up with a summary anyway, because that’s just what I do.

Essentially, Babel is a series of interconnected stories that take place around the world, ranging from places as divergent as Japan, Mexico, the U.S., and Morocco. While there appears to be no connection between these stories initially, we learn as we see more and more that there is a specific chain of events that link all of these disparate elements together. A simple action in one place leads to inevitable consequences in another.

In Morocco, the father of two young boys purchases a rifle to use in keeping jackals away from his goats. The boys, who tend the goats, are fascinated by the gun and fire it since they have been told it is capable of hitting a target as far away as 3 kilometers. The younger boy, showing off his skill, shoots at a tourist bus driving down the road, but believes he has missed. He hasn’t; the bullet strikes American tourist Susan Jones (Cate Blanchett), in Morocco with her husband Richard (Brad Pitt). We learn as the film progresses that they have lost a child to SIDS, and this trip is in part to attempt to heal the rift this has caused in their marriage.

So while the American couple deals with this, we also must deal with the consequences of this inadvertent and accidental shooting on the side of the boys who did it. We learn that the Moroccan police are of the “shoot first, shoot second, sort it out later” stripe as they brutalize the man who sold then gun, then go hunting for the current owners.

Meanwhile, across the world, we also spend time with the deaf daughter of the Japanese businessman who gave the gun away in the first place. While it is his action of giving this gun away that starts all of the other stories into motion, we deal with him only tangentially. Instead, we are more concerned with his daughter, Chieko (Rinko Kikuchi). She finds herself awakening sexually, but is frustrated by the way she is treated because of her deafness. We also learn that her mother committed suicide recently.

Finally, we deal with the children of Susan and Richard Jones (Elle Fanning and Nathan Gamble). Their nanny, Amelia (Adriana Barraza) is planning on returning to Mexico for her son’s wedding. However, the accident in Morocco keeps the Joneses overseas, and she cannot find anyone to watch the kids, so she takes them to Mexico with her. Because she does not have written permission from the parents, there are severe difficulties in crossing back into the United States, in part because her driver Santiago (Gael Garcia Bernal) drives away when he is being questioned by the border patrol.

Of course, none of this happens as I have written it here. Instead, we move back and forth from story to story, getting bits and pieces of each one, and not learning until quite a bit into the film how these stories are connected. It isn’t really until we are already invested in these four stories that we learn precisely how the actions of one person in one story affect the actions and behavior of others halfway across the world.

There are a number of themes running through this film, all of which come into play throughout. The first, naturally enough, is one of interconnectivity, that all of us are connected to each other. Throughout the film , we learn that the actions of one person, even a seemingly inconsequential action can have major ramifications somewhere else, something life changing or life threatening. Even something beneficial—the gift of a rifle to a skilled guide—can result in terrible tragedy through the fault of no one and nothing other than random chance.

As the title of the film suggests, another recurring theme is one of communication and the barriers to communication. Throughout the film, there are problems with even basic information being passed from one person to the next. In Morocco, Richard Jones cannot make himself understood by many of the natives. The police are more liable to shoot and bully than to ask for information or deal calmly with a situation. In Japan, Chieko deals constantly with her frustration at making herself understood in a world that almost demands the ability to hear. Similar problems with basic communication happen in the Mexico story as well, where communication would have staved off all of the problems.

Inarritu’s film is challenging mostly because of the manner in which the story is told. The broken narrative—four broken narratives actually—make this a film that requires close attention for the bulk of its running time.

It’s also a step up in terms of difficulty and mastery of the form from Inarritu’s previous film, Amores Perros. For one thing, a fourth story has been included here. Additionally, rather than showing each story in its entirety with points of connection, this film shows us the entire narrative in a style that requires us to put the pieces together for ourselves. It is ultimately much more rewarding because of its difficulty and because of the need to pay such careful attention to what we see.

For as much as I liked Amores Perros, I have even more admiration for Babel. I’ll be adding Biutiful to my queue in the future, as this is a director I think I need to start paying attention to.

Why to watch Babel: More evidence of interconnectivity.
Why not to watch: Lose focus for a minute, be lost for the duration.