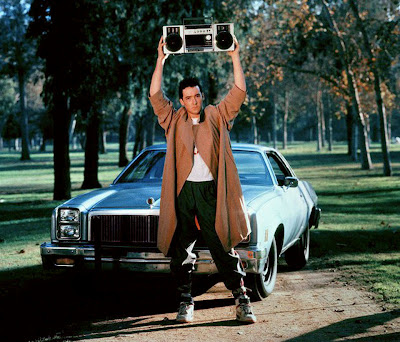 I tend to watch films on my own, and I tend to watch them on my portable. There are exceptions, of course. Sometimes I have to use the laptop, sometimes I hang out in my living room, and at least once a week I iron, so I watch something on my giant television in my basement. This is when I tend to watch VHS tapes, because that’s the only television with a working VCR. Anyway, Sue wanted a nice television for the bedroom, so that was her Mother’s Day present this year. And she also wanted to feed her John Cusack obsession, so I watched Say Anything with her. It’s a bit of a change-up from my normal movie watching pattern.

Cusack made his name early in his career as the hero of teen rom-coms like Better Off Dead and The Sure Thing. Say Anything sort of marks the end of this phase of his career. He still played a few romantic roles after this, but much more as an adult—he couldn’t pull off the “recent high school graduate” thing much longer. Anyway, the film follows a lot of the conventions of the genre; it just does this really, really well.

Cusack plays Lloyd Dobler, who is almost a stereotype of an early John Cusack character. Lloyd is an underachiever. He’s an average student and likes kickboxing. Change out kickboxing for MMA, and you’ve got 50% of guys in high school right now. However, he fights above his weight class romantically, falling for Diane Court (Ione Skye), his class valedictorian. Diane is bright, but a bit socially backward. She won a fellowship to study in England at the end of the summer, but this doesn’t deter Lloyd, who pursues her anyway.

Lloyd’s life is movie enough to make it interesting for a movie, but believable enough to not cause eye rolling. He lives with his sister (Joan Cusack) and her son because his parents are both in the military and are overseas. Regardless of hits life being something other than the norm, Lloyd is a stand-up guy, a genuinely nice guy.

And so, they become a couple, and they’re a cute couple despite the fact that they really don’t appear to belong together at all. Their relationship progresses but there are some significant problems. The biggest problem isn’t the fact that she is destined for greatness and Lloyd is destined for mediocrity, but her father (John Mahoney). He disapproves of Lloyd, as is to be expected (and as a father of daughters myself, I heartily approve of his disapproval). He runs a nursing home, and we discover mid-way through the film that he’s under investigation by the IRS.

And so the film progresses. Lloyd tries desperately to spend as much time with Diane as he can before she leaves for England. Diane is conflicted. She is happy to spend time with Lloyd, but thinks that she should be spending more time with her father, both because of her impending trip and because it’s becoming increasingly likely that he’s going to spend time as a guest of the state.

Really, that’s all there is until she breaks up with him. We get a lot of the standard tropes for rom-coms during a breakup, including the tearful phone call in the rain. However, this film is smart enough to play with these conventions—the tearful phone call isn’t between Lloyd and Diane, but between him and his sister. He looks for advice from a group of his peers hanging out at a gas station and immediately regrets it. All of this builds up to “the scene” of this film, the one that anyone who has heard of this film can reference—John Cusack holding a boom box over his head playing Peter Gabriel’s “In Your Eyes.”

Say Anything is a difficult movie to dislike, so it’s a good thing that I like it. Like a lot of movies that I tend to like, it works because the characters are real and not film caricatures made to emphasize a point or push comedy that wouldn’t work without the characters being jokes. There are a few moments here that are real and help the film work tremendously. Lloyd’s reaction to Diane’s reappearance is perfect, and it’s one of my favorite lines from the film. I also like John Mahoney in this film. His relationship with his daughter is cute and becomes poignant as the film goes on.

What more is there to say here? Say Anything is what a good romantic film should be. It’s good, and it’s romantic. That ought to be enough.

Why to watch Say Anything: It’s a rom-com without being a rom-com.
Why not to watch: Remember the ‘80s? This film won’t let you forget them.