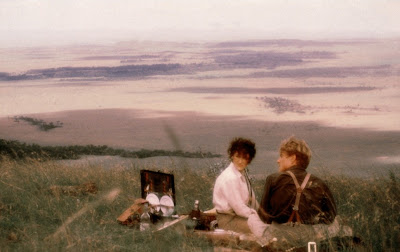 I spent more than two and a half hours watching Out of Africa today. This is one of the great films of the mid-1980s according to the hype and the Oscar nominations and wins. It’s a romance on the grand scale, the sort of romance that doesn’t really get made any more. The film is epic in scale as well as length, filled with gigantic vistas of open land, sweeping events, love, and tragedy. And for the life of me, I’m having trouble thinking of anything to say about it.

Karen (Meryl Streep), who later in life became an author working under the pen name Isak Dinesen, is a wealthy, unmarried woman in Denmark. Because she is unmarried, she asks a man named Bror Blixen (Klaus Maria Brandauer) to marry her out of convenience. Bror has a title but no money, so the marriage would be mutually beneficial—he gets money he needs and she gets a title she wants. The plan is for the two of them to start a dairy farm in East Africa.

When Karen arrives in Africa, though, she discovers that Bror has decided instead to grow coffee. It’s a risky decision, putting much of Karen’s fortune on the line. While in Africa, she meets a pair of men—Denys Finch Hatton (Robert Redford) and Berkeley Cole (Michael Kitchen), who are big game hunters and seem focused on ivory. She adjusts to life in East Africa, and discovers the hard way that her husband is less than faithful. She learns this around the outbreak of World War I when she is diagnosed with syphilis that she contracted from him. This causes her to return to Denmark for a time to convalesce.

On her return, it becomes evident that Bror has not changed at all and she asks him to move out of the house. Her friendship with Denys blossoms into something more than a friendship over time, as should surprise no one who has ever seen a film before. But there are problems here as well, and the problems are not her marriage. Essentially, Denys refuses to be tied down. He spends most of his time out in the bush, either leading safaris or simply on his own in the wilderness. However, when he does return to civilization, he spends his time with her.

Eventually she and Bror divorce, mostly because he finds someone else he wishes to marry, but this changes nothing between Karen and Denys. When tragedy strikes the coffee plantation in the form of a fire that destroys an entire crop and thus all of her money, Karen resolves herself to return to Denmark, knowing that Denys loves his freedom and Africa too much to come with her.

A lot of sighing from the audience accompanies the last hour of this film, naturally. Part of this is because the end is almost obvious when it comes down to it. Karen and Denys cannot live without each other, but cannot live in each other’s worlds. What happens to the two of them is almost divine provenance. The other reason for the sighing in the last hour is that the actual romance between Karen and Denys doesn’t start until that moment—it’s literally seconds before the final hour of the film that the romance heats up.

The sell here, at least for me, is not the romance, which seems to happen almost by fate or decree, but the scenery. The Kenyan country is spectacular, and Sydney Pollack is smart enough to give us a lot of it throughout the film. We spend a lot of time out in the country on various safaris, and this is a good thing. Because it seems like it takes forever for anything to get started here, at least there’s pretty scenery to look at.

The romance, though, seems to be straight out of something that normally has a Harlequin Romance logo on it. Seriously, we have a wealthy woman with a philandering husband. She is wasting away on her own in an exotic locale when suddenly she is romanced by a man with a hint of danger about him, a man who makes his living by adventure. The two are irresistibly drawn to each other, and there are plenty of heaving bosoms and impassioned loins.

Ultimately, I found it difficult to care too much about any of the people in this film. They never felt real to me. They were little more than a collection of traits and clichés that bump into each other in a particularly beautiful setting.

For my money, you’d be better off watching a good National Geographic documentary on Kenya. You’ll get the exact same scenery without the foreground of predictable romance and tragedy. You’ll also likely save yourself at least a half hour, and probably more.

Why to watch Out of Africa: Terrific scenery like nothing else.
Why not to watch: There’s no way not to know where this one is going.